The Japanese player Chikara Nakajima is a veteran of many Pro Tours, and made it to the Top 4 of the team Pro Tour in Charleston 2006 as one-third of team D-25. Nakajima is piloting the lone true aggro deck—Mono-Red Affinity—to have made it through two days of intense Modern action, with even Josh Utter-Leyton's Zoo deck sacrificing aggression for control elements to help combat the combo menace. 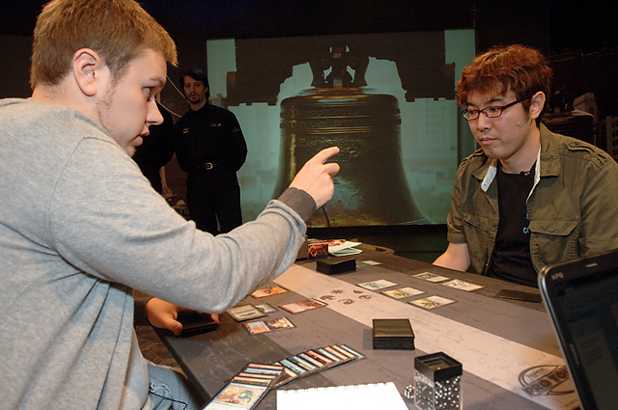 Max Sjöblom with Pyromancer Ascension has been on a tear this weekend, but Chikara Nakajima and his Affinity deck have more Pro Tour pedigree.

Nakajima's opponent is the man who led the Pro Tour from the starting gun on Friday morning to the finishing line last night, making the cut to the Top 8 in first place. Max Sjöblom's Pyromancer Ascension combo deck swept the first Modern bout 5-0, and then Max's run continued as he swept both his drafts 3-0. After the return to Modern for the final sprint to the Top 8, Sjöblom's unbeaten run ended with a couple of defeats, but he had already done more than enough to secure a Top 8 spot.

Forced to mulligan twice, Chikara Nakajima lost the dice roll and was forced to show Sjöblom exactly how unexciting his opening five cards were when Sjöblom played a Gitaxian Probe: Darksteel Citadel, Vault Skirge, and a trio of Arcbound Ravagers. Sjöblom smelt blood in the water and played a Rite of Flame to get his Pyromancer Ascension onto the battlefield on the first turn.

Nakajima deployed his Vault Skirge, then tried to cast his first Arcbound Ravager with a Mox Opal he had drawn. Nakajima needed to add pressure quickly but Sjöblom was waiting to Remand the Ravager back into hand, then aimed a Lightning Bolt at the Vault Skirge. The Japanese player was unable to produce any sort of early offense and Sjöblom was able to build towards his combo with impunity. A Signal Pest was also countered by Remand, and that put the first counter onto Pyromancer Ascension. Following up with a Peer Through Depths, Sjöblom found the Rite of Flame he needed to plop the second counter onto his Ascension, but he was in no rush to complete his win and passed the turn.

Signal Pest, Signal Pest, Frogmite was the response from Nakajima, but it seemed likely to be too late for the Affinity deck to prevent Sjöblom from "going off."

Sure enough, Sjöblom launched into his combo on the next turn. Rite of Flame gave him added mana and triggered his Pyromancer Ascension. From there, things went very smoothly for Sjöblom: 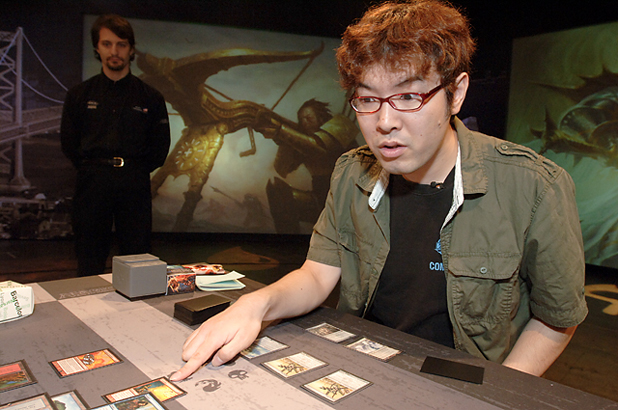 That is a lot of Grapeshots.

Nakajima was buried in Grapeshot, and Sjöblom took a swift lead in the Quarter Final.

Chikara Nakajima had to hope for better luck in his second game, while Sjöblom would have the added concern of the full set of Mindbreak Traps that Nakajima sideboarded in. The Affinity player opened up with a Vault Skirge, but Sjöblom immediately showed his own sideboard cards: added creature removal in the shape of a Flame Slash.

Nakajima placed his Ravager into the graveyard with a wry smile, and for the second consecutive game his Affinity creatures were being shot down as soon as they left his hand. An Atog followed, but was immediately frazzled with a Lightning Bolt—Sjöblom seemed to have answers for everything.

A second Atog finally stuck, and Nakajima was able to take his first step into the red zone. Casting an Ornithoper and a Springleaf Drum, he added a Cranial Plating to his Atog and swung hard, dealing Sjöblom 5 damage, dropping him to 11 life. That was a step forward for Nakajima, but it was followed by two steps backward as Sjöblom lashed out with a second Lightning Bolt to destroy Nakajima's Inkmoth Nexus, which had also dared to attack. That was the second counter on the Pyromancer Ascension...

That sequence of plays meant that Nakajima had to feed both the Ornithopter and Springleaf Drum to his Atog in order to keep his hungry red creature alive, but as Sjöblom could only follow up with a Gitaxian Probe to draw another two cards, it seemed that Nakajima might get an unexpected second chance. 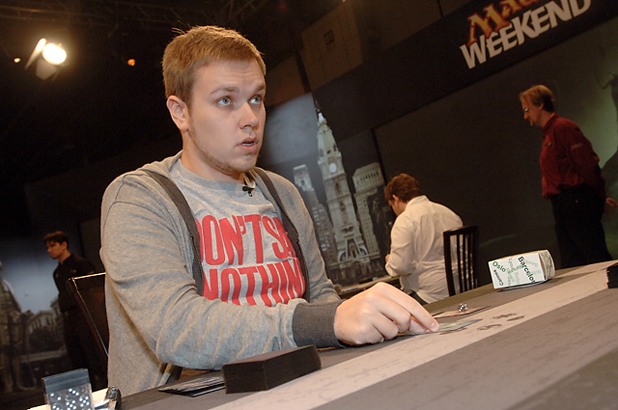 cap="Sjöblom's deck falls just short, and Nakajima makes good use of the stumble.

Untapping his remaining cards—two Mountains, an Atog, and a Cranial Plating—Nakajima played a Darksteel Citadel and equipped a second Cranial Plating to his Atog! Once more into the red zone, Nakajima smashed Sjöblom down to 3 life.

From what seemed like a position of strength, with his Pyromancer Ascension active in play, Sjöblom's combo fizzled for a second time and he couldn't even start the engine on his final decisive turn. Passing the turn back to Chikara Nakajima, the Japanese player levelled the match with a huge sigh of relief, while Sjöblom cursed his bad luck!

The mulligan curse had passed from player to player, and it was Max Sjöblom who was forced to begin the third game with just five cards. A Scalding Turn fetched up a Steam Vaults and Sjöblom followed with a Preordain.

That was the sort of first turn that had made Affinity so lethal many years ago, and Nakajima was channeling the power of Affinity of old. Adding an Atog on his second turn the Japanese player left his Cranial Playing unequipped and attacked, a Lightning Bolt frying one of his Frogmites but still managing to knock Sjöblom down to 14.

Sjöblom needed help, and fast; a Ponder helped him find cards and a Gitaxian Probe revealed the last card in Nakajima's hand—Mindbreak Trap—then Sjöblom passed the turn back, bracing himself for the onslaught to come.

Nakajima drew, paused briefly, then sent his forces into the Red Zone. Sacrificing the Cranial Plating and Ornithopter to his Atog, the Japanese player bashed Sjöblom down to 4, then finished the job with the card he had just drawn: a well-timed Fling.

"That was a good draw" Sjöblom deadpanned, as the two players shuffled.

Sjöblom began with an Island and a Preordain, passing the turn. Oh lordy, Chikara Nakajima was at it again—this time playing all eight of his cards in one turn!

It was all-in from the Japanese player as he sought to lock up the semifinal place. Sjöblom hit back with a Lightning Bolt for the Signal Pest. The targeted removal seemed like trying to stop a stampede with a popgun, and it was all going against Sjöblom now. Ripping a card from the top of his deck, Nakajima played an Arcbound Ravager from the top of his deck before attacking to put Sjöblom down to 12.

Sjöblom was digging hard for answers, Preordaining his way into a Steam Vents that he played untapped, dropping himself to 10 life, before aiming a Flame Slash at the Arcbound Ravager. Nakajima paused and looked at his cards to ponder how much he was prepared to sink into keeping his Ravager alive before deciding that the answer was '"nothing" and letting his key creature hit the graveyard. 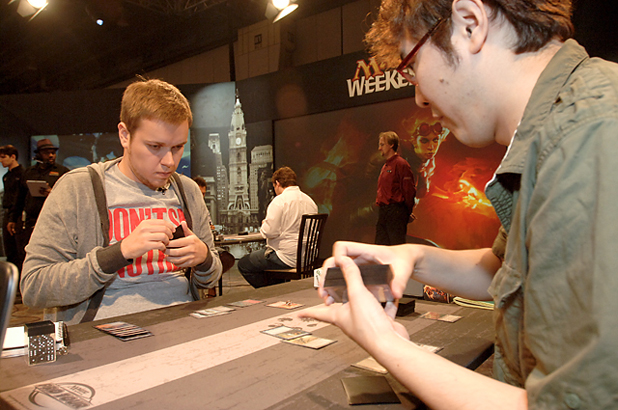 Nakajima puts the pressure on Sjöblom.

Drawing a card for his third turn, Nakajima immediately dropped a second Arcbound Ravager onto the battlefield off the top of his deck! The two players smiled at the play, an unspoken agreement passing between them that the fates were behind the Japanese player.

Another Affinity attack put Sjöblom to 5 and the brink of elimination from the Pro Tour. Untapping a card, Sjöblom had no play that mattered. He unhappily swept up his cards, his fantastic run through this Pro Tour finally ended by the incredible draws and Affinity synergy of Chikara Nakajima!