The talk leading into Pro Tour Dark Ascension focused on two decks: Humans and Delver. The chatter turned out to be correct as both of those archetypes represented nearly half the field in Honolulu, but you wouldn't guess that by looking at the Lukas Blohon/Mamoru Nagai quarterfinal match. Nagai, the lone representative of Japan in the Top 8, had opted to battle with a unique version of Wolf Run Ramp featuring black. It was inspired, in part, by versions that have been floating around after being created by ChannelFireball's Conley Woods.

That was fitting, because Blohon was one of Conley's team members in addition to being Nagai's opponent. The Czech Republic native had also opted to eschew the big two and brought Birthing Pod to the table, despite the fact most members of his team had also opted to run some form of Wolf Run or another. 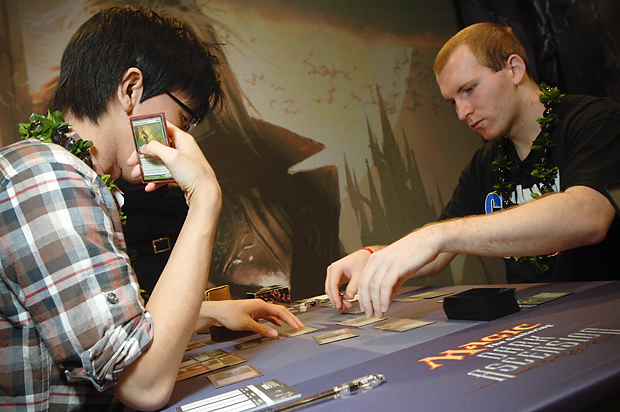 Delver and Humans: two popular archetypes that you will not be seeing in the quarterfinal match between Lukas Blohon and Mamoru Nagai.

Though he had lost the die roll to start the match, Blohon wasted no time in accelerating his mana. Llanowar Elves followed by Birds of Paradise hastily out-paced Nagai, though the Japanese player's Wolf Run deck offered up a Rampant Growth in an effort to keep pace. Nagai cast some acceleration with legs in the form of Solemn Simulacrum, which allowed him to start attacking, and a Black Sun's Zenith for one blew his opponent's side of the table up in fine fashion.

Looking to rebuild, Blohon cast Strangleroot Geist and Birds of Paradise. He leaned back in his chair, stoic but likely not pleased with the board state and the single card in his hand. It was up to his deck to help him find the Birthing Pod that would allow him to start revving up his creature chain, but could he find it in time before his opponent came up with a significant threat?

For a moment it looked like the answer was no as Nagai cast a Primeval Titan to fetch up Inkmoth Nexus and Kessig Wolf Run, but Blohon fired right back with the namesake artifact. He sacrificed Strangleroot Geist to fetch up Fiend Hunter, exiling his opponent's Titan. What had seemed for a moment like a blowout was becoming a slug fest! 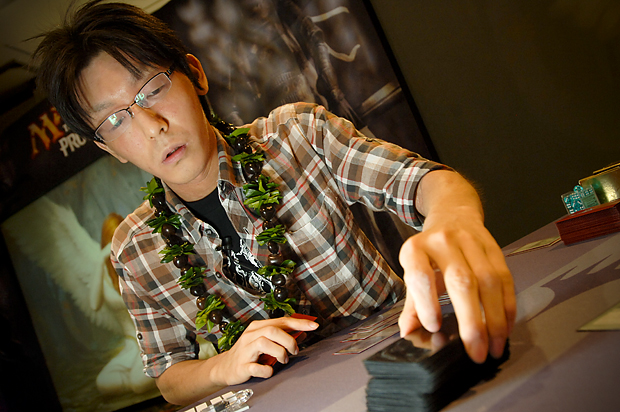 Nagai trades blows with his Czech opponent in the first game.

But just as quickly as the match had turned fair, it went back the other way. Nagai found a second Black Sun's Zenith to wipe his opponent's board, getting his Titan back in the process. He then cast Acidic Slime to take out the Birthing Pod and the players headed to the second game with Nagai in the lead.

After a mulligan, Blohon started the second game off with a Birds of Paradise, a Strangleroot Geist in the red zone, and an Avacyn's Pilgrim. It was a blistering opener, and Nagai felt the heat. His start included simply a Birds of Paradise but when Blohon attempted a Hero of Bladehold to pump his attacking force, Nagai was ready with a Doom Blade.

Solemn Simulacrum helped Nagai stabilize a bit, bumping his mana while providing him a blocker at the same time. The 2/2 traded for Strangleroot Geist, though undying returned the Geist as a 3/2, but an Acidic Slime from Blohon undid the acceleration of the automaton. As a bonus, depriving Nagai of black mana would make it much harder for him to cast Black Sun's Zenith, a potentially devastating card for Blohon. 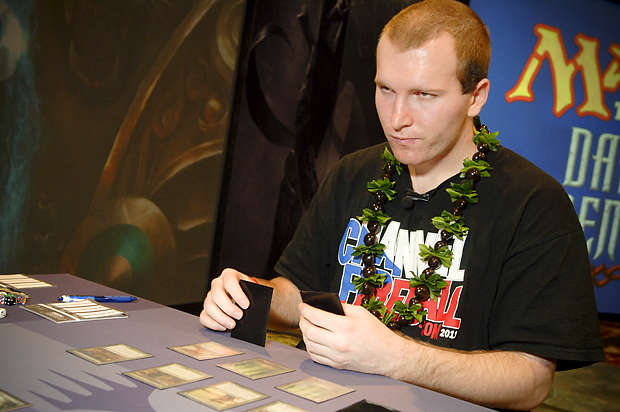 Blohon went against his team's choice of Wolf Run for the unconventional and powerful Birthing Pod deck.

The tides turned quickly, however, as a Primeval Titan for Nagai helped him find the black mana he needed and gave him a devastating threat. Would Blohon be able to recover? An Elesh Norn, Grand Cenobite certainly helped, allowing Blohon to attack with his Acidic Slime while wiping out his opponent's Birds of Paradise and turning off any potential Inkmoth Nexus activations.

Green Sun's Zenith found Nagai a second copy of Primeval Titan which in turn found two copies of Kessig Wolf Run. The match was absolutely a tooth and nail affair with both players struggling to gain a lethal edge. An alpha strike from Blohon forced Nagai to chump block with both of his Primeval Titans. That gave him one draw step to find a solution to Elesh Norn, Grand Cenobite so he could attempt to infect his opponent out with Inkmoth Nexus and Kessig Wolf Run but when the miracle wasn't there they headed to game three with the match tied.

A Sphere of the Suns for Nagai allowed him to accelerate a Solemn Simulacrum quite quickly. That in turn would have allowed him to cast a Primeval Titan on the fourth turn except his opponent had Oblivion Ring to lock down the Sphere of the Suns. A second Solemn Simulacrum for Nagai made up the difference and the question became whether or not he had the 6/6 in his hand.

He didn't! Despite having enough mana to accelerate into the powerful creature, Nagai was forced to simply continue building up his manabase while sneaking in an occasional attack with an Inkmoth Nexus. That meant when his opponent reached six mana Blohon was able to resolve the first major fatty: Wurmcoil Engine. An Ancient Grudge knocked the monster down to size a bit and Nagai finally found a Primeval Titan, though he used a Green Sun's Zenith to find it first.

The Titan fetched up a Kessig Wolf Run and an Inkmoth Nexus but an Oblivion Ring put the 6/6 on lock-down and undid much of Nagai's efforts. Blohon pressed in with his team, losing his Wurmcoil token with deathtouch to a flashed back Ancient Grudge, then passed the turn. Nagai used the opportunity to cast a second Primeval Titan, this time hunting up two more Inkmoth Nexus before using his first two copies to knock Blohon to three poison counters.

A Birthing Pod came crashing down for Blohon, turning his Solemn Simulacrum into an Acidic Slime and blowing up his opponent's Kessig Wolf Run. Did Nagai have another copy in his hand? Or had he over-stepped by not fetching more of the land up when he had the chance? An attack from the Primeval Titan allowed Nagai to search up his second copy of the Wolf Run, but he lost the 6/6 to an Acidic Slime block. He had a Slime of his own, however, and managed to knock out his opponent's Birthing Pod. That meant he had a chance to infect his opponent to death if Blohon didn't have anything, but could the Czech player simply be out of threats? 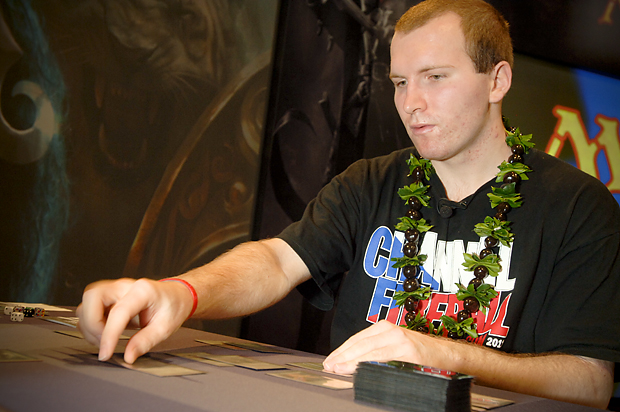 Blohon's Pod lets him upgrade his creatures each turn. But it does need to stay in play, which is not an easy feat against Ancient Grudges and Acidic Slimes.

Blohon cast a Huntmaster of the Fells on his turn and passed, giving Nagai an opportunity to swing for lethal. He sent three Nexus sideways and when he pumped one with Wolf Run he waited for the trick from Blohon. There was none, and the two headed to the fourth game.

With his back against the wall, Blohon found himself taking a mulligan. His second hand was good enough and he opened on Birds of Paradise, followed by a second copy a turn later. Though the 0/1s weren't particularly scary, they allowed Blohon to cast a speedy Hero of Bladehold; all of a sudden his Birds were a lot more imposing!

Across the table Nagai had to eschew his deck's preferred early game mode, "accelerate mana," for one of "kill that Hero or lose to it." His Go for the Throat did the job nicely but opened up for his opponent the opportunity to go beatdown which a Strangleroot Geist and Blade Splicer allowed him to do nicely.

An emergency Black Sun's Zenith for one helped Nagai cut his opponent's team down to size, but he still faced 5 points of beatdown each turn from a pumped Strangleroot Geist and a minimized 2/2 Golem token. Post-combat Blohon agonized over a decision; what could he be thinking about casting as the last card in his hand? It turned out to be Birthing Pod, and his reason for pause was evident: he couldn't activate it immediately opening it up for possible removal from his opponent. 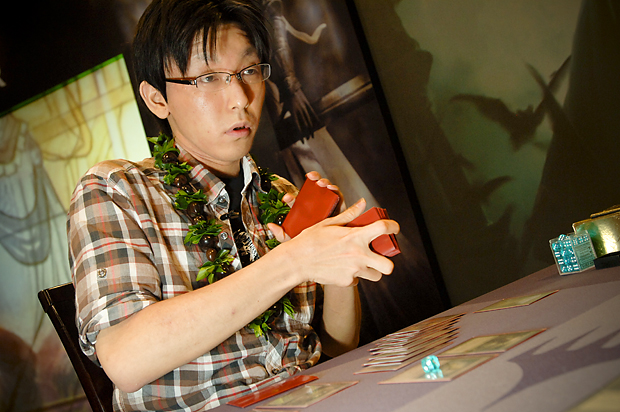 Nagai shuffles up after one of the many Zeniths he played in the match.

That's exactly what happened as Nagai cast Ancient Grudge to take the powerful artifact down to the ground, then used Green Sun's Zenith to fetch up Birds of Paradise. Though his play had cost him his Pod, Blohon's reasoning was quite clever: once again he had tied up his opponent's mana to deal with threats rather than accelerating maximally. The next combat step left Nagai at 10.

A Grave Titan came crashing down for Nagai, and the horde of Zombies quickly overwhelmed Blohon. Stuck drawing lands from his deck instead of the spells he needed to stay alive, the Czech star soon found himself staring down a second copy of the 6/6. Then he found himself extending his hand in defeat.

Mamoru Nagai wins 3-1 and advances to the semifinals!