Quarterfinal: Turning the Tables on a Bad Matchup

Carvalho came into the Top 8 sitting pretty on top of the standings. While he only managed 4-2 in the Standard portion with his Blue-black control deck, his 5-1 draft performance followed by 4-0-2 in Extended was more than enough to propel Carvalho to the top of the pile coming into the playoffs. Facing off against Carvalho is Akira Asahara, who despite being the only player on 39 points to squeeze into the Top 8, managed to pick up more wins than Carvalho in Standard finishing at 5-1. 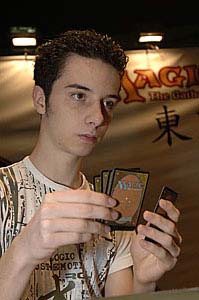 However, that doesn't mean Asahara isn't nervous about his chances. His Enduring Ideal deck could run into trouble against Carvalho's wall of counters, so position yourself on the edge of your seat and let's see how this plays out.

The flip fell first on the floor, and then in Carvalho's favor, who surprised nobody by choosing to play with a turn one Watery Grave. Asahara decided to double the number on money rares on the table with a Sacred Foundry of his own. Not to be outdone, Carvalho played another Watery Grave, and just so you guys at home know, these boys are not playing with sleeves.

Both players continued to solidify their mana base, but Asahara built the biggest house when he quietly laid down his one Boseiju on turn four. Carvalho raised his eyebrow and promptly switched away from playing lands and passing it back by dropping an Azami, Lady of Scrolls. While the Boseiju meant he couldn't counter the first Enduring Ideal, he could certainly take down the copies if he could just draw enough cards.

Asahara then threw down a Faith's Fetters on Azami to put a halt to the card drawing, and within a matter of turns managed to Ideal out a Zur's Weirding to lock Carvalho out of the game and take a surprising lead in the match.

While shuffling, one of the table judges noticed that some of Carvalho's cards were worn at the edges, and three Urza's Saga Persecutes were quickly pulled out and replaced with nice, new and most importantly clean white-bordered ones. The table judge then recommended that both players check their sideboards to ensure they still contained 15 cards. Carvalho laughed and pointed out that the head judge had his sideboard, and both players knuckled down for Game 2.

While Asahara considered a Sleight of Hand, photographer Craig Gibson got down and started burning the camera flash in the players' faces. If you thought playing under lights would be hard? You should try thinking several turns ahead with your Sleight of Hand white your retinas are screaming for relief. Asahara tried for a Defense Grid, but Carvalho had the textless Mana Leak to take it out.

A turn later Asahara stunned everyone by again drawing his sole Boseiju, which put Carvalho at a huge disadvantage unless he could find one of the two Legendary lands he had sided in to fight back with. Matters were made worse for Carvalho when he missed his next land drop, and dropped a Jushi Apprentice.

Asahara then played a Confiscate on Carvalho's Swamp, and while he managed to Boomerang it back, and uncounterable Ideal soon followed and for the second game in the row, Carvalho scooped up his cards in the face of Zur's Weirding. 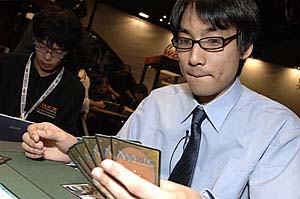 Asahara's wardrobe was an homage to Jon Finkel's 2000 Worlds.

Craig the photo guy then sidled up to me and pointed out that Asahara is wearing almost the exact shirt and tie Jon Finkel that wore when he won the individual title, the team title and the hearts of many a Magic player in Belgium in 2000. If Asahara wins out, expect stocks in sky-blue shirts and navy-blue ties to skyrocket. Knowing his matchup was looking so grim on paper, Asahara purchased the suit the night before the Top 8 in hopes of channeling some of Finkel's legendary play ability.
For Game 3, Carvalho led with a turn-two Jushi Apprentice, leaving the way open for Asahara to pound a Defense Grid into play. Not long after, Asahara tried to Confiscate the Jushi, but Carvalho had the Keiga, the Tide Star needed to pay alternate mana-cost for Disrupting Shoal, and the mana to pay for the Defense Grid.

Carvalho then sought to draw more cards as Asahara locked up the spell front with another two Defense Grids. Things looked grim for Carvalho until his attacking Jushi Apprentice suddenly turned into an Ink-eyes, Servant of Oni, reducing Asahara's window of opportunity to a couple of turns. The top of Asahara's library yielded nothing of help and the players were soon shuffling up for Game 4.

For the first time in this Top 8, Asahara had the opportunity to play, and after Carvalho mulliganed to six, Asahara wasted no time accelerating his mana with a Boros Signet. Carvalho tried to take back the card count with a turn-two Jushi Apprentice, but Asahara slapped down a Faith's Fetters to keep Carvalho on the back foot.

Asahara added insult to injury by playing out his Boseiju, yet again, and when Carvalho went for the Persecute kill shot with Disrupting Shoal back-up, Asahara used it to power out a back-breaking Mana Leak. One untap step and another uncounterable Enduring Ideal later, Akira Asahara and his Finkel-inspired suit advanced to take on Frank Karsten in the semifinals.