Sunday at Worlds, and that means time for single-elimination matches, best-of-five style. André Coimbra is playing in his first Pro Tour ever, but he's coming off what had to have been a very frustrating Saturday, where his Portuguese national team started off in second place but lost all four rounds of Team Rochester draft. Coimbra is playing a homebrew blue-black-green aggro-control deck that uses Birds and Elves to power out Specters and Dimir Cutpurses, with removal and countermagic to bring it home. 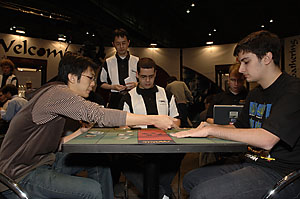 Kaji and Coimbra were both new to the Top 8 stage.

His opponent is Tomohiro Kaji, one of four Japanese players dreaming of a possible Japanese sweep of the Team, Player of the Year, and World Champion titles. Kaji was one of the four players to go undefeated during the Standard portion of the event, playing the aggressive Japanese green-white Glare of Subdual deck. His opponent only went 3-3 in the Standard day of competition, but he has faced Kaji's deck once before, in the hands of Morita, where Coimbra was able to take the match 2-1.

Kaji won the die roll to go first, tossing out a 20 and drawing a wince from his opponent, whose deck has a significant advantage going first.

Kaji took a mulligan and seemed to have a slow draw. Coimbra opened with Birds of Paradise, followed by Elves of Deep Shadow. He had Specter in his hand, but since all his lands were forests he didn't have access to double black until the Elves of Deep Shadow were online, so the Specter had to wait until a disappointing turn three.

Worse, at that point Kaji channeled Arashi, the Sky Asunder, wiping out the Specter and Bird, and with it any source of non-green mana for Coimbra. Kaji started playing out the heavy hitters, starting off with a sequence of Loxodon Hierarchs. Coimbra was able to hold on briefly, but quickly ended up with a hand of seven cards he couldn't cast of two Forests, a Plains, and an Elves of Deep Shadow. And that, boys and girls, is why Birds of Paradise costs so much money.

Going to their sideboards, Kaji brought in the full complement of four Carven Caryatids, and the remaining two copies of Arashi, the Sky Asunder Arashi, Birds and Specters Asunder. For Coimbra's side I had figured he'd bring in his Sakura-Tribe Elders and Faith's Fetters because otherwise a Glare in play pretty much wrecks his whole deck, but Coimbra surprised me by deciding not to sideboard at all, staying with his game 1 configuration.

Coimbra pulled up his first hand, seeing this:

He thought about this one a bit, then threw it back. Peeking, the next card was a Forest. The six-card hand he got back was:

This one got thrown back after more agonizing. Once he declared the mulligan he peeled back the top card of his deck, revealing a Watery Grave. 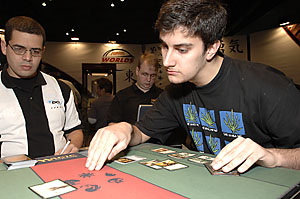 Though he was clearly frustrated, this is the part where everything started going right. First off, Kaji took a mulligan as well. Then, Coimbra destroyed his opponent with the following sequence of plays.

Quick and brutal, it was one of the best recoveries I've ever seen in a Top 8, putting the game score tied at one apiece.

For this one Coimbra's deck gain offered a poor opening seven:

Again he spent time thinking about keeping. This time at least he had spells he could cast, but it was a slowish draw with no acceleration so he sent it back. The hand he got back allowed a turn-two Specter, while his opponent (on the play) had turn-two Selesnya Sanctuary. Kaji had a very disappointing third turn, just playing Wood Elves and fetching up a Temple Garden. Hypnotic Specter came over, dropping a Glare from Kaji's hand. A Cutpurse and Elves of Deep Shadow joined the team. But, Kaji was now at the critical four-mana point. Did he have another Glare? What about an Arashi? Nope, it turned out to be a Loxodon Hierarch, meaning the Specter would be hitting at least once more.

This time the Specter sent a Seed Spark to Kaji's graveyard, and at this point I think Coimbra made a misplay. Sitting on a hand Specter No. 2 and nothing but more lands, he thought about it a while and then just passed the turn.

Given the power of Hypnotic Specter, I was willing to bet that there was no way Kaji was slowplaying Arashi or Glare, and without another Specter in play Coimbra really didn't have all that much pressure. Yes, a topdecked Arashi would wreck him, but I'd argue that he's in pretty bad shape if that happens anyway, and if it doesn't (which is likely) he can shred Kaji's chances very quickly.

I didn't know it at the time, but this mistake (if I'm right) turned out to come at a very bad time. Kaji drew a Carven Caryatid, which drew him into a Glare that he couldn't cast until his next turn. With four cards in hand, there was only a 25 percent chance the single Specter could save the day.

The Specter knocked loose a Vitu-Ghazi, the City Tree instead, and the game basically ended next turn when Kaji put the Glare into play. At this point Kaji had more creatures as well as a City-Tree in play, and there was just nothing Coimbra could do. The Glare kept his guys in lockdown, and several turns later Coimbra fell under an avalanche of green-white beaters.

This one too began with a troubling draw for Coimbra. 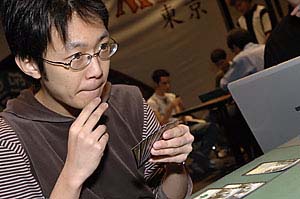 The difference this time was that Coimbra didn't take much time to think about it at all. He rifled through it once, then a second time, then said that fateful word: "keep." Going first, he got the Birds out, but didn't draw the second land for way too long. Kaji's draw wasn't heavy on fat, but it was able to pump out various flavors of Elves for the first five or six turns.

Coimbra eventually got another land, but it was a Forest, making only his two copies of Putrefy playable. Two elves went down over the course of two turns, and then the Portuguese player was stuck with six cards in hand with

, none of which he could actually cast. Singing was heard in the distance when an Arashi came into play.

On the next turn it sent Bird of Paradise to the dumper, and with it went all of Coimbra's hopes of actually casting anything in his hand. It was a quick, painful loss, coming on the heels of what had to have been a long, painful team day Saturday. For Coimbra, it was time to be proud of just how well he'd done in his first Pro Tour. For Kaji, it was time to start thinking about the semifinals.