Quarterfinals: “That Was Ugly”

Cedric Phillips is a well-known and well-respected Midwestern player from Ohio, and has made the big time here in Kyoto for the first time, his previous best finish a Top 8 at GP–Columbus 2004. His opponent, Brian Robinson, however, is even more of a newcomer to the bright lights of the Arena, this being his first premier event Top 8. Both competitors brought their best aggro game to the table, with Robinson’s four-color Doran deck (nicknamed “Dark Bant” for its incorporation of

Another relevant aspect of this aggro-aggro matchup is the enormous amount of life gain to which both players have access, including but not limited to Loxodon Warhammer, Rhox War Monk, Knight of Meadowgrain and of course Ajani Vengeant. 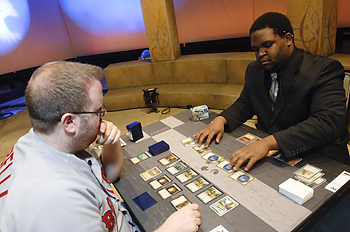 Americans Brian Robinson and Cedric Phillips are both in their first Pro Tour Top 8 match.

Cedric took the first turn, but Brian was the first on the board with a Noble Hierarch off of a deceptively powerful Ancient Ziggurat. In a four-color aggressive creature deck like Robinson’s, the power of the painless land was considerable. Wizened Cenn joined up on the Kithkin side, and Cedric soon added three Spirit tokens courtesy of Spectral Procession. A second Hierarch on Brian’s side allowed the first to attack in for 2, then a Tidehollow Sculler added a bit of disruption to the exalted package.

Phillips revealed Cenn, Ajani Vengeant, Path to Exile, and Mutavault. Robinson decided on the Path to Exile, and added a Gaddock Teeg off a second Murmuring Bosk to lock out the leonin planeswalker. Phillips was on the straight beatdown plan, making a second Cenn and attacking for 6, taking the life totals to 17-12 in his favor.

Robinson dropped his entire hand on the table the next turn, with a third Hierarch, a Rhox War Monk and a Birds of Paradise joining his team. Phillips pondered his opponent’s tapped lands for a moment.

“Yeah, surprisingly, I took no pain to do that,” Robinson chuckled.

Phillips activated his previously played Mutavault and swung in with the three flying Spirits and the now 4/4 Cenn-pumped changeling land.

“Birds do what birds do best,” joked Robinson, moving his Birds in front of the rampaging Mutavault. Phillips laughed and agreed. The life totals stood at 9 Robinson, 17 Phillips—a seemingly good position for Phillips considering his standard game plan of swarm and smash.

However, Robinson untapped and swung in with his lifelink Rhox War Monk, triple exalted, to reverse the life advantage to a respectable 15-11. Phillips cracked back with his three Spirits a third time, taking it down to 12-11 with the slight life advantage still to Robinson. The Kithkin player made a lifelinker of his own, a Knight of Meadowgrain, and passed the turn back.

When Robinson again swung in with the beefy 6/7 War Monk, Phillips paused to consider. “Two cards?” he confirmed, then activated his Mutavault and blocked with the whole team.

“That works,” said Robinson.
“Learned that from my roommate,” Phillips remarked. “Gaze of the Gorgon? If so, we can go to the next game.” It was Robinson’s turn to chuckle, but he shook his head—the Standard-illegal Ravnica instant would not be making an appearance here. First-strike damage brought the life to 15-12, and then the Rhox War Monk took the two Wizened Cenns with it to the graveyard. In the aftermath, the life totals stood at 15-18.

A second War Monk arrived for Robinson, and Phillips’ team, now including Cloudgoat Ranger, did not seem to be making a big enough dent in the ridiculous life-gaining power of the War Monk. Small Kithkin tokens served as adequate chumps to protect Phillips’ own life total but could not stop the monstrous +6 life a turn. The situation became further exacerbated when Robinson laid the legendary Doran, the Siege Tower, negating the defensive power-pumping benefit of the Cloudgoat Ranger and allowing Robinson’s Birds of Paradise to trade with Spirit tokens.

Phillips drew a Path to Exile and used it immediately on Robinson’s Gaddock Teeg. This allowed him to play out his Ajani Vengeant. Free at last, Vengeant took out his rage on the Tidehollow Sculler to rebuy the previously removed Path.

“Do you have dice?” Phillips asked head judge Riccardo Tessitori, who obliged with a few token beads.

Phillips’ prognostication proved to be half-true, since Robinson added Loxodon Warhammer and bashed Ajani’s face with trample. Phillips merely replaced the dead Ajani with a brand new Ajani #2, then a third, and then a fourth, as over time his growing Spirit army could neither defend Ajani effectively nor take a significant chunk out of Robinson. The incredible combination of triple Noble Hierarch and Loxodon Warhammer, even with Doran negating the Warhammer’s power bonus, was pulling the game away further and further in Robinson’s favor. A few ugly blocks, losing tokens and Figure of Destiny to stall for time, didn’t help Phillips’ cause.

“This damage seems pretty relevant,” said Phillips, as he attacked with Goldmeadow Stalwart and two 1/1 flying Spirits to take Robinson down a notch ... from 87 to 77. The true reason for the attack, Windbrisk Heights, revealed a discount Cloudgoat Ranger for Phillips, and when he ripped a second Anthem, his motley crew of tokens looked at least reasonable against Doran. A pair of black removal spells mid-block made short work of Phillips’ defenders, however, and the pair was off to Game 2. Robinson ended the game at 93 life.

“Wasn’t playing that one too well,” observed Phillips. “Like, I threw away a Figure for no reason... thank God for five-game matches!” 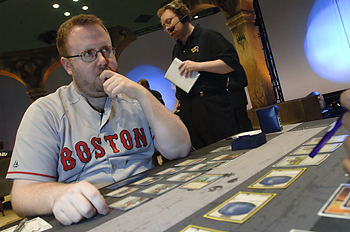 Brian gives a shout-out to his favorite team ...

Phillips began with an Isamaru, Hound of Konda on the cheap, Goldmeadow Stalwart, revealing a Wizened Cenn. Robinson one-upped him with a Birds of Paradise turn one, Doran, the Siege Tower turn-two opener. Phillips nodded and replied by Path to Exiling his own Stalwart to Rampant Growth into Spectral Procession.

A Tidehollow Sculler revealing Spectral Procession, Path to Exile, Wizened Cenn and Goldmeadow Stalwart proceeded an attack by Doran. Path to Exile, the one white instant standing in Doran’s path, found itself exiled below the Sculler.

Phillips continued to bash with his Spirit tokens, bringing Robinson down to 15, then 10. Despite Robnsion’s Kitchen Finks to gain him a piece of life, Phillips then brought him down to 5 with a midcombat Glorious Anthem accompanying three attacking Spirits. This left Phillips with a reasonable board of two untapped Spirit tokens and a Wizened Cenn.

It turned out that a reasonable defensive force was insufficient against the power of Robinson’s wizardry—an end-step Path to Exile, another Path, a Nameless Inversion after the untap, and a full team swing took Phillips from 10 down to 0 in one fell swoop.

Phillips again reflected on the previous game. “Gonna have to rally, now, “ he said, then added, laughing: “Probably should have Pathed your Doran. Then I wouldn’t have died!” 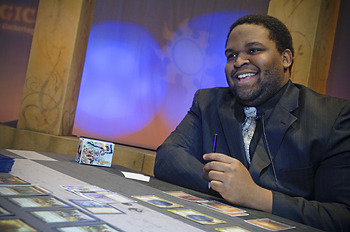 ... while Cedric rocks a smile and a suit coat.

Phillips again led with a Goldmeadow Stalwart, but history repeated itself when Robinson trumped him with Doran off of a turn-one Birds of Paradise. Phillips looked to be in good shape with a Knight of Meadowgrain, followed by three flyers off of three white mana with his Spectral Procession.

“That is a guy I did not want to see,” sighed Phillips in response to a Wilt-Leaf Liege. “So, you’re attacking for approximately a million?”

“So, 2,000 damage then?” said Phillips. He chumped with a Spirit token, then untapped and laid a Windbrisk Heights. His Glorious Anthem meant he could attack in the skies with two Spirits, bringing Robinson down to 14 after the previous single attack with Stalwart.

A second Wilt-Leaf Liege arrived for Robinson, and Phillips wilted a bit further. He took his lumps from the now 4/9 Doran but double blocked the 6/6 attacking Liege with his own team of 2 3/3 Kithkin. After lifelink and a tiny bit of painland damage, the life totals stood at 14 Phillips to 13 Robinson. Phillips played a Ranger of Eos and one of his two fetched Figures of Destiny.

Robinson untapped, played a Tidehollow Sculler to steal a Wizened Cenn over the second Figure, and followed up with a third copy of the Liege. He bashed again with 4/9 Doran and 6/6 Liege, putting Phillips into the tank. Phillips triple-blocked the Liege to kill it, losing his Figure and Ranger in the process, while Doran ate the remaining blocking Spirit token.

Phillips reloaded with a second Stalwart and a second Figure, but they did not seem powerful in the face of Liege-pumped Doran and its Birds of Paradise friend. The last Spirit traded with the Bird, but the hit from Doran brought Phillips to 7 to Robinson’s 11. Rhox War Monk and Noble Hierarch joined the white-green party on Robinson’s side of the field, and when he untapped and swung in with the team, Phillips resigned in the face of 21 toughness of damage.

Brian Robinson defeats Cedric Phillips 3-0 and advances to the Semifinals!

“I feel like if you don’t have a Bird, you can’t win,” claimed Phillips after the match. “A mana accelerator, I mean.”

“Yeah, if I have no turn-one play, you maul me,” Robinson agreed.

Phillips shook his head one last time. “Absolutely destroyed. That was ugly.”