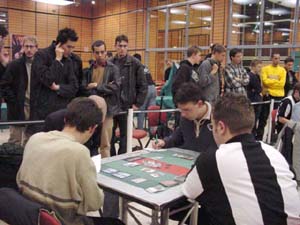 This quarter final sees two amateurs meeting in the quarterfinals. Daniel Madan sporting an aggressive red white build with such favorites as Loxodon Warhammer and Spikeshot Goblin versus Sebastien Bernaud piloting a much more controlling black Blue build featuring a number of expensive bombs including a Reiver Demon.

players seemed happy with their opening hands and Daniel opened up with a Pyrite Spellbomb which he followed up with a turn two Slith Firewalker signaling is aggressive intent. The slith swung in again on turn 3 whilst the spellbomb was sacrificed to dig for the third land which was nicely waiting on the top of the library. Sebastien made his first play when he cast a freshly drawn Terror during his main phase. Daniel did not miss a beat in the pressure however making a Clockwork Condor on his forth turn making Sebastien's reply of Neurok Spy seem a little small.

Daniel had yet to find any of his equipment cards however and this meant that the Loxodon Punisher he cast on turn 5 was not as large a threat as it could have been. Daniel however seemed to still be searching for gas as he was forced to tap out for Thoughtcast on his fifth turn and was less than impressed when his attempt to trade the spy for the punisher was thwarted by a Call of the Kha. 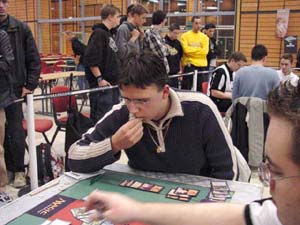 Sebastien played a Serum Tank which would give him a constant stream of cards and should be enough to win the game if he could survive long enough however he was only at 11 and so he needed to improve his board quickly. The board position further swung against him when a Leonin Den Guard joined Daniel's team. Sebastien's deck sprung into life on his next turn with a Nim Lasher and a Rustspore Ram coming into play and looking to stabilize the board however everything changed when Daniel busted out a Mindslaver and after some surprisingly sub optimal plays from Sebastien including playing Inertia Bubble on his own Clockwork Condor he was forced to scoop up his cards.

Daniel once again opened up with the first play of the game with a Lightning Greaves which was met by an Annul. This was followed up by a Molten Rain and a turn four Slith Firewalker. This was countered by a Proteus Staff from Sebastien. However Daniel's aggressive approach seemed to be the more effective as he was able to play a Skyhunter Cub and a Loxodon Warhammer on successive turns whilst Sebastien was a spectator his deck seemingly failing him again. A Rustspore Ram removed the Warhammer but it was too little too late and another appearance of the Mindslaver was enough to persuade Daniel that it was time to call it a day