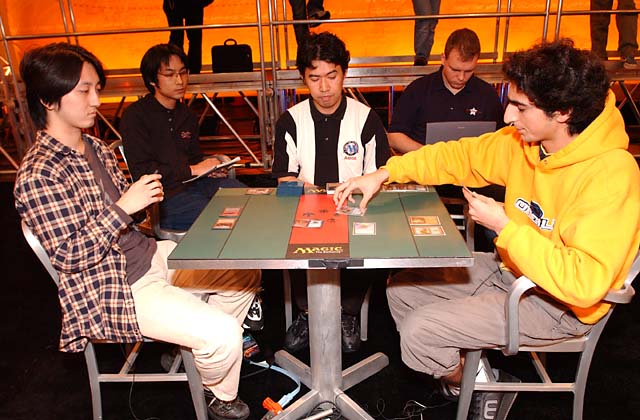 Could a rich, white male be our next president?

Will a deck with Tinkers and Monoliths win this Pro Tour?

The above questions seem similar, but yet there is one difference. Tomohiro Yokosuka is actually playing Psychatog in this tournament, and managed to assure a Top 8 berth. None of the aforementioned cards (from a total of fifty six copies in this Top 8) can be found from his deck. This makes him something of a hero of the people, fighting a just cause in this increasingly standardized world. This is Tomohiro's second Pro Tour, as he finished 25th in Yokohama.

His opponent this round is Gabriel Nassif. Known as Gabe to his friends and Mister N to his enemies, the Frenchman has quite an impressive resume. Masters final, team Pro Tour finals and whatnot. Not bad for someone not old enough to go to a casino.

Gabriel thinks that the matchup is very even, but that his experience will lead to him outplaying the opponent. He also thinks that this is one of the few matchups where Mana Severance version is worse than normal Tinker, as Upheaval and Stroke of Genious provide a good late game. Tomohiro thinks that the match will be decided in great part with the coin flip, and he also says that turn two kills are not nice.

Gabriel won the die roll and chose to go first...but was that the correct call? The pros are still considering this question. He lead with a Polluted Delta, sacrificed it to get an Island and dropped a Voltaic Key. Tomohiro played Shivan Reef. Gabe cast Tinker with the help of Ancient Tomb to get Gilded Lotus. Then he followed up with Brainstorm and Mana Severance. So much action, and this is only the second turn. Yokosuka played Brainstorm at end of turn, and shuffled during his turn with Polluted Delta getting an island. During Gabriel's upkeep Tomohiro Iced the Lotus. He had access to the information about the lands in Gabriel's hand, due to Severance. Maybe Gabriel was out of lands? This proved not to be the case, as the Frenchman played Ancient Tomb, Talisman of Progress and Tinker for Charbelcher getting a concession from his opponent.

Yokosuka took a mulligan, and pondered his next hand long and hard before keeping it. Gabriel was fine. Both players dropped Island on turn one. I looked around and saw Hans Joachim Höh drawing cards. There was Stroke of Genius on the table. He just drew and drew. It seemed like a never-ending process. But let's get back to this match. 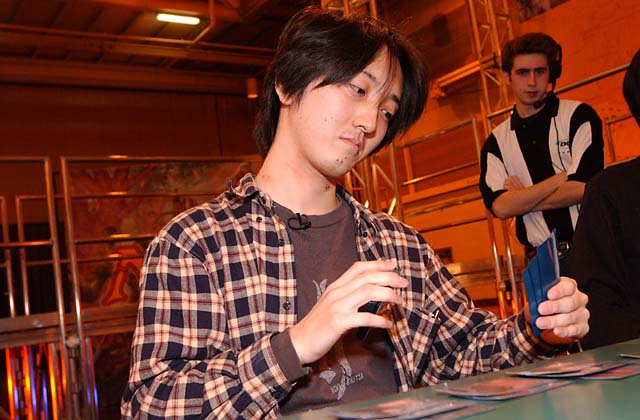 Tomohiro played Bloodstained Mire while Gabriel had a second Island. At the end of Yokosuka's third turn, Gabriel got Mana Severance with Mystical tutor. The Japanese Iced his land during upkeep but a third Island helped cast the Severance. During his fourth turn Gabriel played Gilded Lotus with the help of City of Traitors, and Tomohiro played Fact or Fiction at end of turn. He took two Counterspells over two Scepters and Accumulated Knowledge. Gabriel cast Mystical Tutor for Deep Analysis, but second Ice shut down the Lotus during upkeep. Gabriel was only able to hard cast the Analysis. Tomohiro Intuitioned for Accumulated Knowledge at end of turn. During his turn he cast it and played Mox in order to avoid discarding, bringing his mana count to seven with a full grip of cards.

Gabriel started casting the threats. Charbelcher got countered and he drew more with Analysis. Tomohiro Brainstormed, and second Charbelcher went immediately to the graveyard. Another Fact gave the Japanese three Cunning Wishes over Brainstorm and Fire/Ice. Nassif got his Tinker countered but resolved a Charbelcher with three mana open. Tomohiro had seven mana open so he cast Cunning Wish. Oddly he took Shattering Pulse over Stifle, meaning that he cannot cast the second Wish right then without dying, essentially wasting three mana.

Gabriel was shaking his head and saying to himself "Fact or Fiction...makes difference!" Seemed like a strange situation for such an insight, but who am I to question him.

Nassif shot at end of Tomohiro's turn but another Wish got the Stifle, and Shattering Pulse without buyback handled the shooter. Gabriel Tinkered for Mindslaver and started to have fun, but not before Tomohiro Wished for Tsabo's Decree. Gabriel then played the fine turn of Psychatog, Decree oneself, and in response discard hand and remove the graveyeard from the game. On his turn the fourth Charbelcher ended the game.

Tomohiro took the fourth Mana Leak back in for a Fact of Fiction.

How did the Psychatog player lose after drawing so many extra cards? Knowledge for four and two full Facts is quite the load. Gabriel drawing several Tinkers and all four Charbelchers is no picnic for the opponent, but still the main issue was that all the Duresses were hiding at the bottom of Tomohiro's deck. 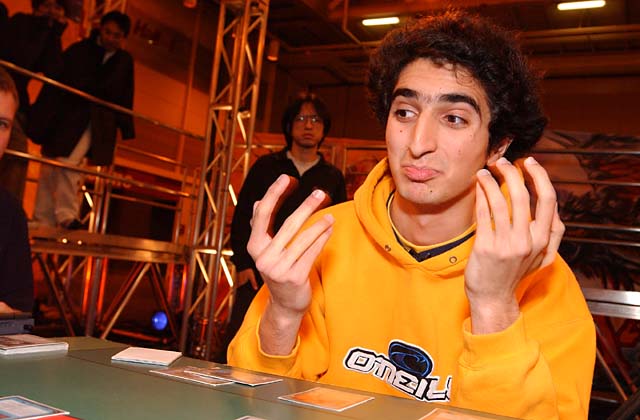 Yokosuka started with a Delta. Gabriel sped out a Talisman with Ancient Tomb, and Tomohiro got Island for end of turn Brainstorm. A second Delta hit play and Gabriel cast his own Brainstorm. Charbelcher got Mana Leaked during his turn. Tomohiro went Swamp, Duress seeing Charbelcher, Tinker, Force Spike, Rishadan Port and Chain of Vapor. Tinker got the boot. Gabriel played the shooter during his turn, Force Spiking a Mana Leak. Yokosuka was lacking a fourth land and just said go. Gabriel Ported the second Island during his mainstep. Tomohiro took mana and Iced the Belcher, but Gabriel just played Tomb and Mana Severance. With nothing but a Mox to play on his turn, Yokosuka succumbed in three games.

Tomohiro thought that Nassif played well. Also a problem was that without drawing the Rack and Ruins, he was unable to stop Gabriel ramping up the mana development. Gabriel would have taken Belcher with the Duress but otherwise approved of his opponent's actions. He thought that the match was decided with good draws on his part, and an opposing mulligan.