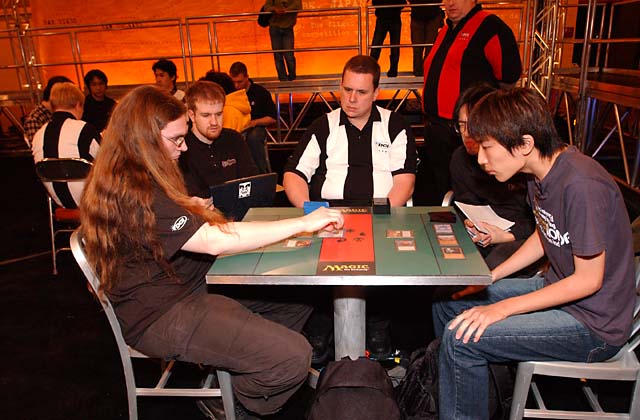 Hans Joachim Höh has been the wild-haired, wild-eyed surprise of this weekend. Coming into this, his fourth Pro Tour, he had yet to make a Day 2. He's been picking up speed on the Grand Prix circuit, and all that work finally paid off. He 7-1'd the first day but found himself needing a win to Top 8 by the end of Saturday. He did, and now he's got his eyes on the prize. Unsurprisingly, he is playing Tinker.

His opponent is Japanese Rookie sensation Masashi Oiso, who made history this weekend by becoming the first Japanese player to make two Pro Tour Top 8's. What makes his success this weekend even more incredible is that he did so without the benefit of a team, just his buddies at his local card shop. Imagine if he teamed up with some of Japan's veterans! Oiso was likewise playing Tinker, but a version far to the left of the norm.

Höh took a long hard look at his opening hand- it contained mana accelerating lands, a Tinker, Upheaval and Grim Monolith, but no blue sources. He was playing first, so rather than taking a gamble on drawing blue mana, he sent it back. The next hand was better, and he started the game with Voltaic Key. Rishadan Port slowed Oiso down a bit, and Höh summoned Metalworker. Oiso answered back with Thran Dynamo and a Metalworker of his own. Höh used Key/Metalworker to produce plenty of mana, and drew seven cards with Stroke of Genius.

Interestingly, he could have played Bosh followed by Tangle Wire instead, but this play put him in a position where he could gain some massive card advantage, and if he drew a land that produces two mana, he could follow up with the Tangle Wire anyway. Indeed, City of Traitors was in the seven cards, and Tangle Wire was played to slow down Oiso a bit. All of his lands were tapped on upkeep but Metalworker was able to do its thing, and Mindslaver hit play. Höh had two Stroke of Genius in hand, and didn't want Oiso using them to target himself. 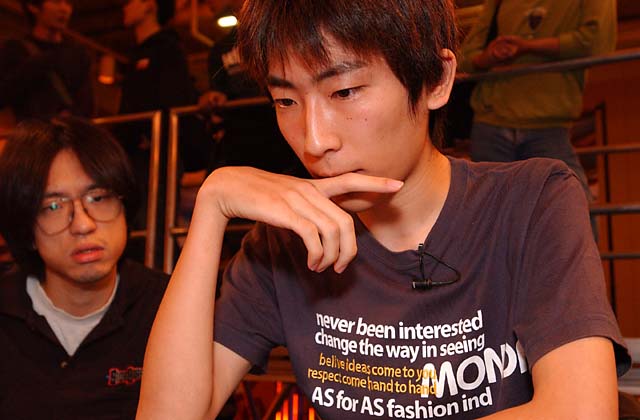 After some thought, on upkeep he produced a ton of mana before Tangle Wire went on the stack, and cast a Stroke to draw sixteen cards. After some more thinking, he played Ancient Tomb, used Voltaic Key to untap Metalworker, and produced only six mana, playing two more Tangle Wires. He then moved to discard step, getting rid of quite a few cards, including the Stroke of Genius that would have been a major problem under Mindslaver. It wouldn't be a stretch to estimate that this whole turn took around twenty minutes.

Höh- "That may have been the most difficult turn I've ever played. That situation, having half your deck in your hand and not being able to win, and knowing that your opponent may take your next turn and win...that's crazy."

With three Tangle Wires out, Oiso would have to cast spells only on his upkeep. He cast a Stroke of Genius, and activated Mindslaver. Höh's hand contained lands, Bosh and Upheaval. Oiso used Höh's Keys to untap his own Metalworker twice, producing enough mana to Stroke Höh for 22. One of those 22 cards was another Stroke, and Oiso had Höh's Metalworker activate to point Höh's Stroke right at its owner to deck him and win.

Höh explained that he made a mistake by tapping out on upkeep to Stroke himself for the maximum amount rather than letting Tangle Wire resolve and casting the Stroke for less. If he had done the latter, he would have been able to play an island afterwards. As is, he likely would have won if Mindslaver was in the sixteen cards, but otherwise he had no mana available other than what he would get from playing a land and untapping the Metalworker with a Key- doing so means not being able to get the blue mana necessary to cast Tinker.

Höh mulliganed down to six. He missed his third land drop, and had no artifact sources of mana to play. Oiso played Grim Monolith and Voltaic Key, along with Welding Jar. On the following turn he played Thran Dynamo, but didn't play a threat to go along with all that mana. Höh finally found a third land, and played a Key of his own- it was soon Tinkered into Gilded Lotus, and tapped to bring out Metalworker. On end step, Oiso cast Stroke of Genius to draw four cards. He then untapped, played another Welding Jar along with a Metalworker, and ended his turn. On upkeep, Höh cast Mystical Tutor to get Upheaval. Before he was able to draw it, Oiso used Rishadan Port to tap down Höh's island, and Höh used his own Port to tap Oiso's remaining untapped blue mana source. In response, Oiso cast Stroke of Genius, drawing three cards. Now, Höh got his Upheaval, and cast it with one mana floating. After everything bounced, he was able to play City of Traitors, along with Metalworker. Oiso couldn't do more than playing a land, a Key and his two Jars on his first post-Upheaval turn. 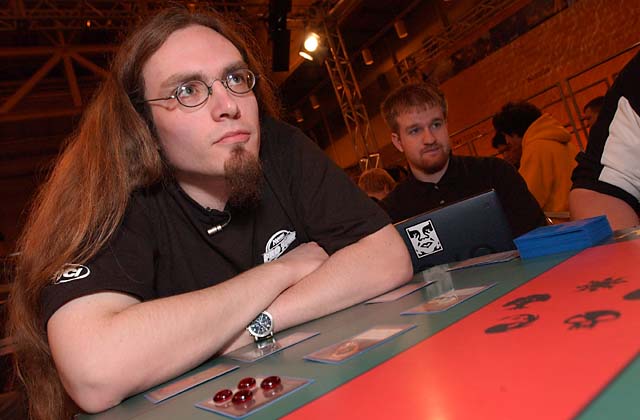 Höh's Metalworker now became active, and let him draw six cards off Stroke of Genius. Interestingly, Höh had a Key and could have produced more mana to draw more cards, but was perhaps hesitant to use too much mana on the Stroke, showing that last game's mistake was fresh in his mind and he wanted to make sure he left resources available. After the Stroke resolved, he played the Key and untapped the Metalworker, which produced fourteen mana. Gilded Lotus and another Key provided even more, letting him cast another Stroke for thirteen, leaving two blue and two colorless floating. Now a third Key came down and untapped the Metalworker with the colorless mana floating, allowing it to activate again- this time producing twelve mana. This led to Tinker for Mindslaver, and another Tinker for Bosh. As soon as Höh activated the Mindslaver, Oiso conceded.

Oiso had a second turn Monolith, which brought out Metalworker. On turn three he simply played a Port and ended his turn, using it on Höh's upkeep. To make matters much worse for Höh, he was once again mana screwed in the early game, and missed his third land drop, discarding Metalworker on end step. Oiso drew a second Port, locking down Höh even more. Höh made his third land drop on turn four with a Port of his own, but was far behind. Oiso went up eight cards with Stroke of Genius and cast Tinker, getting a Key to untap the Metalworker. This led to Mindslaver and an activation, two more Metalworkers, and a Thran Dynamo. Höh's hand contained Mystical Tutor, Stroke of Genius, two Dynamos, Metalworker, Upheaval, Tangle Wire and Shivan Reef. Without many options that would benefit him, Oiso just played the Reef out of Höh's hand and tapped down all the lands. Oiso took his turn, Tinkering out Phyrexian Processor set to ten. He had enough mana and Keys left to make three 10/10 creatures in the same turn, and followed with Tangle Wire for the win.

Höh's bad luck streak continued, as he mulliganed down to five. Both players had Grim Monolith on turn two- Oiso had one Port, and Höh two. On turn three, Oiso tapped his Monolith, played a Dynamo and a Key, then Tinkered the Monolith into Welding Jar. On end step, Höh cast Stroke of Genius for three. He untapped, played Tangle Wire, and ended his turn. On upkeep, Oiso tapped out for Stroke of Genius, drawing four cards. Höh took his turn, and played a third Port along with a Monolith. Oiso played a Mindslaver, but did not have enough mana available to activate it. Höh used the window of opportunity to its fullest extent, casting Upheaval. He played a land and Grim Monolith, and suddenly things weren't looking bad at all for a double mulligan game. Oiso played a land, Voltaic Key, and two Welding Jars. Tinker let Höh change his Monolith into a Gilded Lotus, which tapped for red to cast Rack and Ruin, targeting Oiso's artifact land and Voltaic Key- both Jars were sacrificed to nullify the effect.

With mana still remaining, Höh played Tangle Wire to lock down Oiso for a turn. When it triggered on the following upkeep, Oiso used Stifle on it. He then played Welding Jar, Grim Monolith and Thran Dynamo, catching up to Höh in the mana department. On the next turn, he cast Tinker to get Mindslaver, and activated it. On end step, Höh cast Stroke of Genius for zero, so that Oiso wouldn't be able to use it and target himself. The rest of Höh's hand contained an island and Bosh, and Tinker showed up on the draw, getting a big sigh out of Höh. Oiso used it to sacrifice Gilded Lotus and get Mindslaver, which was activated to get it in the graveyard and out of the way. When he got to his own turn, Oiso summoned a pair of Metalworkers, and a turn later used them to cast a big Stroke of Genius, followed by Mindslaver. With few options left, Höh summoned Bosh, Iron Golem. Oiso produced a massive amount of mana, and cast Upheaval with thirty-two mana floating. Surprisingly, he chose not to Mindslaver Höh at any point during the turn, which is a great combo with Upheaval- you take your opponent's turn, and force them to discard down to the worst seven card hand possible. Instead, Oiso chose to wait until the next turn when he could play Phyrexian Processor and put lethal creatures on the table, then activate Mindslaver to ensure that Höh couldn't get out of it.