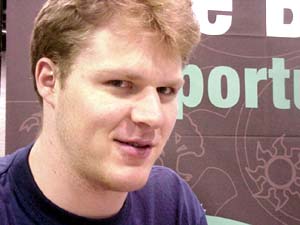 was a rematch of a Day One pairing between these very different players. Ben emerged victorious in that meeting and Gerard was looking to reverse his fortune by sitting in the opposite seat that he used yesterday. Ben arrived at the Feature Match area first and was sitting in the same seat as yesterday which was a great disappointment to Fabiano. "The last time I sat here I lost to you. I wanted to sit on the other side. Do you want to switch?"

"I would switch for you."

"Thanks, I'll remember that."

Gerard was all sunshine and smiles regardless and announced the reason he was so chipper, "This is my first Top 8."

"I made the Top 4 of the team Pro Tour but that doesn't really count." Gerard quickly shifted gears, "How many girls do you think read the coverage?"

Apparently Gerard was keen on one of the girls working the show, "I told the Bench Warmer girls to come over here after they were done-remember the Asian girl?" He was referring to a trading card of the girl that he and Rubin used to decide choice yesterday.

Gerard wiped his hands on his trusty towel and shook his opponent's hand, "Good luck man!"

Both players kept. Ben opened with an Island and a Peek. "Why now?" asked Gerard.

Ben played out a Seal of Cleansing and passed. Gerard was sitting on a pair of Deltas. Ben played a Delta of his own and then when Gerard played Bloodstained Mire he whistled and commented that there were some pretty expensive cards in play.

Another Peek showed Daze, Counterspell, Cunning Wish, two Scepters, Vampiric, and an Island. Ben left one mana open to cast a face down Angel. Gerard decided to break his lands and counter it. Gerard cast an Isochron Scepter and responded by sacrificing a fetch land. He eventually imprinted a Daze on it. Ben took a long time contemplating his next turn and ultimately played a fetch land and cast Deep Analysis with his fetch land available if needed. Gerard chose not to activate the Scepter, he Vampiric Tutored at the end of the turn instead.

He passed the turn back without incident and Ben broke his land and took his turn. He played a Meddling Mage and waited for responses but Gerard had none and Ben named Cunning Wish. He also played a morph. Gerard cast the Fact or Fiction that he had searched for last turn. Gerard took a pile with Tog, Scepter and land over one with Tog and Fire/Ice.

Gerard played Bloodstained Mire and made a Scepter with Fire/Ice on it. And he used it immediately to kill the morph-Ben still had the Seal. Ben flashed back a Deep Analysis and then Brainstormed. Ben then Duressed and Gerard broke his Mire for a Swamp and used it to Vampiric Tutor in response. Ben saw Scepter, Tog and Cunning Wish. He took the Scepter. Ben used his Seal on the dangerous Scepter and passed the turn after swinging for two.

Gerard merely passed and when Ben used another Duress he cast FoF in response. He flipped over Brainstorm, Counter, Chrome Mox, Tog and Fire/Ice. Gerard took the first three and Brainstormed in response. Gerard showed Ben a hand with Tog, Wish, Mox, and Counterspell and Ben took the Counter.

The Mage beat Gerard down to six and Gerard brainstormed EOT. He used a Mire to shuffle his deck and then cast FoF. Gerard revealed Fire/Ice, two Islands, Cunning Wish and Chrome Mox and Gerard took the Fire/Ice when it was put into a pile by itself.

Gerard cast a Tog and pried a, "That sucks." from the taciturn Rubin. He had the Diabolic Edict and he used it to kill the blocker and Gerard fell to three on the next attack. Ben promised to finish him off on the next attack when he played a Shadowmage Infiltrator. Gerard allowed it to resolve and passed his next turn with lethal damage staring him in the face.

When Ben attacked he killed the Meddling Mage and took one. Ben drew a card and passed the turn. Gerard cast Cunning Wish and pondered what to take. He had 26 cards in his yard and decided to get Corpse Dance.

Gerard's turn was indecisive. He could probably win if Ben did not have a Diabolic Edict. Finally Gerard played the Corpse Dance and picked up a Psychatog. He went for the kill but Ben had the Smother. Gerard Countered. The Counter resolved but Ben had the Edict as well. Gerard wondered if he should have waited another turn to draw another counter.

Gerard mulliganed to kick off Game 2, which came as a huge disappointment to the Gerard fan club that was engulfing the feature area. That is not to say that Ben was without his fans - Brian Hacker and Frank Gilson were looking on rapt until they were convinced to do a draft with Jeff Fung.

The second game was slow to develop and Ben was able to resolve a spell without fear thanks to an EOT Peek at Gerard's hand that had no permission. He played a Damping Matrix and he didn't have to worry about Gerard's Togs. A few turns later another Peek allowed him to cast a face-up Exalted Angel.

He rode that all the way to victory even though Gerard gave him a scare in the end game playing as if he had an out. Ben used another Peek to ascertain that Gerard was bluffing and the match was over shortly thereafter.