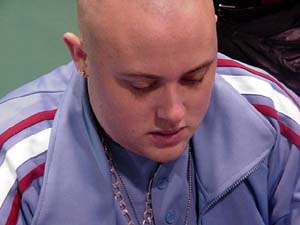 Quarterfinal match featured two solid competitors that both wanted to get their hands on that trophy. Paul Rietzl from Your Move Games brought a Psychatog deck, which will be completely unaffected by the January first bannings, to the table. Peter, on the other hand, brought a deck that will cease to exist come January first.

Peter won the die roll and elected to play first. He kept his opening hand while Paul Parised to six.

The first two turns of the game consisted of "land go" from both sides. On Peter's third turn he played an Ancient Tomb and dropped Metalworker. Paul came back with a Polluted Delta and passed the turn back. Peter was then able to trap Paul under a Tangle Wire, leaving his only play to be Cunning Wish for Fact or Fiction.

Paul then cast Accumulated Knowledge during his upkeep, played a land and passed the turn. Over the next couple turns, while Paul was under the Tangle Wire, Peter was able to Tinker out a Mindslaver.

Paul revealed his hand to be Intuition, two Force Spikes, Upheaval, Fact or Fiction, Mana Leak. He drew a counterspell for his turn, then Peter made him cast Intuition and Force Spike it.

PTR's next turn was simply Tinkering out Myr Incubator and activating it.

"Well, at least that wasn't really close at all" - Paul Rietzl

Paul's first play was a turn two Powder Keg which blew up Peter's Seat of the Synod to cut off his mana. Two turns later PTR tried for a Tangle Wire, which was Mana Leaked.

PTR's next turn was a repeat of the last, having a Tangle WireForce Spiked after not drawing a land. Peter played out a Metalworker while Paul cast Intuition for Accumulated Knowledges.

The first few turns saw little action outside of "land… go" until Paul cast an end of turn Cunning wish for Fact or Fiction, which PTR responded to with a Stroke of Genius for four which was Dazed.

Paul replayed his Island and passed the turn back to Peter. Peter had a more lively turn with Tangle Wire and Metalworker. Paul intuitioned for AKs during PTR's endstep. 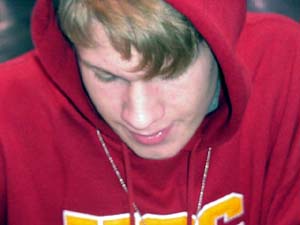 Paul got tapped down on his upkeep, and Peter tried to take advantage by playing Mindslaver which got Annulled. Paul plays through the Tangle Wire for a few turns until he casts an end of turn Fact or Fiction revealing Force Spike, Mana Leak, two Polluted Deltas and a Daze. Peter split them as "land or no". Paul plays a Psychatog on his turn and passes back the turn with five land open. Mindslaver got countered, but a Tinker resolved to get Myr Incubator. Paul didn't draw an answer and the game was over.