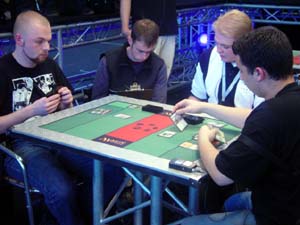 Farid and Nicolai passed passed each other after the draft, Farid muttered, "So lucky!" The Norweigen's draft had started strong with Molder Slug, and he followed it up with Icy Manipulator, Spikeshot Goblin, two Electrostatic Bolts, and Solemn Simulacrum. His seven-drops - two Trolls of Tel-Jilad and a Wormskin Forager - also promised to be powerful in the green-on-green matchup.

Farid, on the other hand, didn't have much firepower to bring to the battle. To win, Farid would need to rely on his Living Hive, Slith Ascendant, Arrests, and the combat tricks Soul Nova and Awe Strike. His two Viridian Shamans, while powerful, were probably worse in this matchup than they would be anywhere else.

Both Nicolai and Farid felt that Nicolai had a distinct advantage.

"Two Shamans eh?" Nicolai asked as they sat down to begin the game.
"True," affirmed Farid.

The first game started out innocently. Farid lead with a Copper Myr, and Nicolai played a Tel-Jilad Chosen. Farid upped the ante with Slith Predator and Viridian Longbow - threatening to kill the Chosen on the next turn. Herzog, lacking an immediate answer to the Bow, just attacked Farid down to eighteen on his turn. Farid then asked the judge a question, which Nicolai guessed was about the inter action between Viridian Longbow and Tel-Jilad Chosen (the equipped creature is the source of damage, not the Bow), but was actually about whether Awe Strike works if the targetted creature dies in response (it doesn't). Farid decided to attack and grow his Slith rather than to try to equip the Longbow and shoot down the Chosen. On Farid's next turn, Nicolai killed the Slith with Electrostatic Bolt, so his choice not to equip the Bow proved to be astute.

The game looked to be coming to a standstill, but Nicolai took things to another level with Molder Slug. Farid's expression on seeing the Slug was one of total dejection. He had no way in his deck to remove the Slug unless Herzog decided to send it into his Soul Nova - an unlikely occurance in Rochester Draft. At that point Farid didn't even have double white, so the Slug began taking large bites out of his life total. How ridiculous is the Slug? It kills all your guys, AND it's a 4/6 for five?

Farid got his second white mana a couple turns later, so Herzog went to Plan B - drop some artifacts and send Krark-Clan Grunt into the Tel-Jilad Archers. Farid revealed his trick for the matchup, Awe Strike, to take down the Grunt. However, just when things were looking up for the Frenchman, Nicolai dropped Trolls of Tel-Jilad and Wormskin Forager on consecutive turns to take the first game.

So we've seen how Herzog's deck wins the matchup - Molder Slug backed up by even larger green men - but what does Meraghni's have to produce to come out on top? Farid's third turn Pearl Shard elicted a "nice" from Nicolai - a good indication that he wasn't happy to see the generally underrated artifact. Farid followed it up with a Tel-Jilad Archers, but Nicolai had Solemn Simulacrum and Icy Manipulator to bolster his side of the table. At this point, Meraghni had the option of racing the Simulacrum with the un-Icyable Archers, but he instead decided to sit back on defense.

Instead of immediately using the Icy to keep Farid off white mana, Herzog opted to tap down the Pearl Shard - an odd choice as he didn't have many attacking prospects with the Archers staying back. A couple of turns later, Herzog decided that keeping his opponent from casting white spells was a good thing, so he began tapping Farid's Talisman during upkeep. Meraghni drew a Creeping Mold for the Icy soon after, but he still didn't seem able to cast most of his spells.

Herzog, speculating on Farid's probable holdings, guessed the double-white-requiring Slith Ascendant - a guess that was proven correct as Farid dropped the dangerous flier on his next turn, when he finally drew a Plains. At this point, Herzog must have lost track of things, as he decided to target the Ascendant with Electrostatic Bolt while Pearl Shard was untapped. On his next turn, his error was somewhat mitigated by a topdecked Pyrite Spellbomb, but Nicolai still muttered, "So bad," as he passed the turn - clearly frustrated about his lapses. 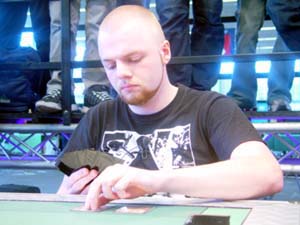 Neither player had very good attacking prospects, so they both began marshalling their forces. Nicolai's board improved to Leaden Myr, Viridian Joiner, Iron Myr, Tel-Jilad Exile, Krark-Clan Grunt, Solemn Simulacrum, and Goblin Replica, while Farid held him off with Copper Myr, Tel-Jilad Archers, Leonin Den-Guard, Vulshock Guantlets, and Pearl Shard. It would take something large to break things up. Herzog's solution was Trolls of Tel-Jilad, but Farid had the immediate reply of Arrest.

With the Trolls no longer an option, Nicolai decided to try and break through with his smaller creatures instead. He used Deconstruct on Pearl Shard, Replica on Guantlets, and attacked the next turn with Exile and Grunt. Farid took a while deciding on his blocks - probably figuring out how to wreck Herzog the most with Awe Strike. Eventually, Den-Guard blocked Exile and Archers took on the Grunt. Awe Strike on Grunt three-for-one'd Herzog, but he had Battlegrowth to make it less terrible. Soul Nova then offed the Exile, so Herzog's attacking days looked to be over, at least for a while.

When Farid tapped eight mana a few turns later, Nicolai exclaimed, "Oh my god," as there was only one thing it could be: Living Hive. With Icy out of the picture, and his forces depleated from his attack, Herzog didn't have any way to deal with the 6/6 trampler, and he soon succumbed.

In contrast to the previous two games, this one was a fast-paced race to twenty damage. Herzog didn't have any immediate answer to Slith Ascendant, and it soon grew out of range of any of his removal, so he was left with only one option: kill or be killed. Ogre Leadfoot off Deconstruct targetting a myr put him in contention, and Wormskin Forager put him a step ahead. Farid, however, had been dropping creatures of his own, and it looked like he would be able to chump-block long enough to let his Slith attack for the win. Herzog noted that Awe Strike would be extremely bad for hin, and he passed the turn without attacking. When Farid went to send his Slith in for another hit, Herzog interrupted him and dropped the bomb - Incite War with entwine. Farid smirked - wrecked by a fourteenth pick! He was forced to Creeping Mold a myr to stay alive the next turn, but his deck was unable to come up with any miracles and he packed up his cards.

For the first time in the match, Farid came out to a fast start this game while Herzog stumbled. Farid began the assault with a third turn Creeping Mold, and followed it up with Vulshok Guantlets on Leonin Den-Guard. Herzog was forced to wager the game on Meraghni having no Viridian Shaman, as he had to tap out for it on his fifth turn. With two Shamans in his opponent's deck, this wasn't a good gamble, but facing six damage a turn, he was out of options. Remarkably, Farid didn't have the Shaman, and Nicolai's Icy took over the board, stabilizing him at seven life. 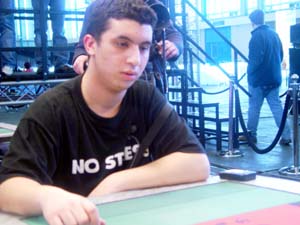 Nicolai got out Tel-Jilad Exile and Spikeshot Goblin and got to work evening the life totals. A Deconstruct on Vulshok Guantlets signalled the begininning of the end, and two Goblin Replicas joined the Exile to hasten Farid's demise. Despite Soul Nova on Exile and Viridian Shaman on Icy Manipulator, he couldn't stop the assault, and he scooped facing lethal damage on the next turn.

Both players predicted Herzog to take the match, and he did, handily. It was certainly possible for the Frenchman to win, as Game 2 demonstrated, but Farid really needed either Living Hive or Slith Ascendant to win, while Nicolai had several ways to take the games. The result of the match probably surprised neither player.