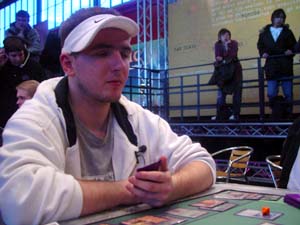 new guy versus the habitual quarterfinals loser. The mysterious, often talked-about Canada with its forestland mystique versus the beatiful Sweden. Which will prevail?

Aeo ended up with a Red-Black deck running a lot of good removal like Shatter, Electrostatic Bolt, and Grab the Reigns. Anton´s Blue-Red Affinity deck has plenty of removal targets in the form of Pentavus, Platinum Angel, Megatog and two Myr Enforcers. Anton drafted a Terror in order to deal with a potentially dangerous Spikeshot, but ended up not splashing it.

Aeo thinks that he managed to cooperate well with his neighbours during the draft, and adds that the answers he got give him an edge in the match. During the swiss he drafted four Blue-Red-Black Affinity decks and a "really bad" Green-White that he 3-0´d with regardless. Anton said that his side of the table had more colorswitching, and was upset that Nicolai randomly took a black card from him. Others also took Teeths and Scales that Anton wanted. He was hoping to get a Welding Jar to protect the threats, but none was seen aside from early picks. Due to Aeo`s Promise of Power, Anton has to be aggressive in order to win. During the swiss he drafted Black-Red, White-Red x 2, White-Green and Blue-Green.

Anton: So this is your first Pro Tour? How lucky. I needed to wait for the second one to make Top8. (slightly sarcastic, but also boasting voice)
Aeo: Yeah...I was really lucky in my last two matches.
Anton: I was kind of lucky in my first eleven.

Anton won the flip and started. Aeo took a mulligan. Anton had Alpha Myr while Aeo lacked a two-drop. Anton played Wizard Replica, and Aeo had Bottle Gnomes for defense but Anton`s Scimitar enabled the guys to keep up the beats. Aeo just hit for one and played Elf Replica. Anton cast Aether Spellbomb and Myr Enforfer for two mana with his explosive draw, putting the Scimitar on Wizard Replica before swinging with that and Alpha Myr. It traded with Elf and Aeo was put to twelfe life.

During his turn Aeo dropped Mesmeric Orb. Among the four cards it milled were an Override, interesting maindeck card but good against Grab the Reigns. Enforcer and Replica hit Aeo down to six and Anton dropped Grid Monitor. Aeo failed to mill away any of his three Nim Lashers to make this equally embarassing. Aeo just played a land, Ancient Den I might add. Anton milled six including Megatog and hit with the three guys. Paquette sacrificed Orb to Shrapnel Blast the Replica away, then blocked and sacrificed Gnomes going to five life. Anton equipped the Enforcer and passed. Aeo had nothing and Anton cast Thirst of Knowledge, discarding Pentavus (?). Shatter killed Enforcer and Aeo fell to one. He put out Spikeshot as chump blocker, but it got bounced with Spellbomb and Monitor ended the game.

Anton played Bonesplitter and hit for four with Neurok, after which he cast Wizard Replica and equipped his Myr. Shambler got blocked by the Myr and a newly cast Nim Lasher was sacrificed before it even had a change to bring a strong presence into the game. Anton hit Aeo down to eight with Wizard Replica, Neurok Spy and Vulshok Berserker, a nice draw to an empty hand. Aeo played Ogre Leadfoot and brought Jonsson down to six with Shambler and Hematite.

The game was getting really intense, as Anton had a two-turn kill on the board while Paquette could hit for lethal soon. Neurok Spy put Aeo down to four. The Canadian drew; attacked with everyone bringing Anton to two, and showed a useless Promise of Power.

Anton: The Vulshok Berserker draw was pretty good! You weren´t exactly drawing removal either.
Aeo: Sometimes you do, sometimes you don`t.

Aeo went first and kept while Anton mulliganed. No Myr for Aeo, and Anton had an off-color one. Still without a red mana Aeo put out Elf Replica. Anton just played Alpha Myr and passed. The two-power guys traded, and Aeo cast Serum Tank and added a counter with Great Furnace. Anton Cast Frogmite for one and chose not to attack with Myr, leaving blue and two open. That helped him to Override a Barter in Blood. The guys hit and Anton passed. Awfully slow beats versus Serum Tank. Aeo dropped Shambler leaving two open. Anton kept on hitting and played yet another off-color Myr. Paquette drew from Tank during main step and cast Hematite Golem. 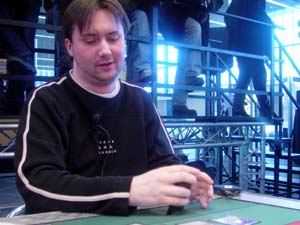 Anton drew his fifth land and played Platinum Angel. Grab the Reigns immediately dealt with that and Frogmite. Anton drew his second Mountain and dropped an immensely large Megatog having five artifacts out. At this point both players were at thirteen life. Aeo thought for a long time. Then he hit with Shambler and Hematite. Anton blocked Hematite with Megatog and Shambler with Myr. Hematite became 9/4, and the Swede sacrificed Myr and land. Topdecked Thirst of Knowledge provided the missing lethal artifact.

It seems that the sketchy creatures Black-Red is forced to play are a liability versus an Affinity deck. It also seems, though, that rares in general are nice.