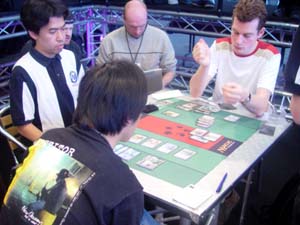 was a time when the Magic community was waiting for a Japanese Magic player to make a Top 8, and it finally happened when Tsuyoshi Fujita reached the finals of Pro Tour Tokyo. After that, the country went through another dry spell where Sunday finishes are concerned, but as of late Japanese Magic has absolutely exploded. This is the fifth, count 'em, fifth individual Pro Tour in a row where a Japanese player has made the Top 8. Not only that, but it's been a new player every time, except when Masashi Ooiso did it twice. This time around, it's Osamu Fujita representing Japan on the Sunday stage. Fujita is best known as a "Silver Collector", because he has made the finals of numerous tournaments, but has never managed to win the whole thing. He had to settle for second place at Grand Prix Hiroshima, Grand Prix Taipei, the APAC Championships, and Japanese Nationals.

If anyone can sympathize with Fujita's plight, it's Kamiel Cornelissen. Cornelissen burst upon the Magic scene a few years back, coming in second place in back-to-back Pro Tours. Since then, this is his first return to the Top 8. People had huge expectations for Kamiel after his big two event run, and they were likely too unrealistic. Despite the fact that it's taken him a while to return to this point, Cornelissen has been a strong force on the Pro Tour during that time. The only question left to be answered is if one of these players will make the finals again, and if so, can they break the curse?

Cornelissen kept a one-land hand with a Spellbomb, and had a lot of trouble finding a second one. Fujita used Silver Myr to get out Nim Shrieker on turn three, and then put Mask of Memory on it to get some serious card advantage while Cornelissen already had his back against the wall early in the game. A Frogmite gave Fujita a little more to work with, and Cornelissen found a second land, using it to summon Neurok Familiar. The card flipped over was Goblin War Wagon, and it went into his hand. With an AEther Spellbomb in play, Cornelissen had some chance to improve his board position, but it was going to be a hard fight. Fujita put the Mask on the Frogmite and drew some more cards, then summoned Somber Hoverguard. Cornelissen was still stuck at two lands, and just played Empyrial Plate. Fabricate allowed Fujita to search up Crystal Shard, and with Cornelissen stuck at two mana, this was very bad news. It bounced the Familiar to clear the way for a massive attack, and Cornelissen conceded.

Cornelissen started off with Viridian Longbow, and played a second turn Neurok Familiar. Fujita had a second turn Myr, and Cornelissen used turn three to equip the Familiar with the Longbow and kill it. Fujita untapped, and put Cornelissen on a slow but steady clock with Relic Bane. Cornelissen played Empyrial Plate, and Fujita brought out Crystal Shard, bouncing the Familiar. It would give Cornelissen another shot at a free card, but it would set back the tempo a bit. It didn't hit an artifact when it came back out, and on Fujita's turn, Fabricate searched out Rustpore Ram. He then used his remaining mana to play Mask of Memory, and ended his turn. Cornelissen played a War Wagon, and attacked for a point of damage with the Familiar. Rustpore Ram came out to deal with the Empyrial Plate, and Frogmite was summoned for only one mana. Cornelissen attacked with his Wagon and Familiar for four damage, played another Wagon, and put Lightning Greaves on it. This ensured a blocker that couldn't be moved, and would be able to block a Masked creature. Fujita had the perfect answer, however, bringing out the trampling Lodestone Myr and giving it the Mask.

Cornelissen cycled Pyrite Spellbomb looking for an answer. Domineer would have gotten the job done and then some, but Fujita used his Crystal Shard in response to bounce back the Lodestone. This wasn't the worst thing possible since it effectively made Domineer a bounce spell, but Cornelissen still had his back up against the wall. Skeleton Shard would have made things even more lopsided, but the only card left in Cornelissen's hand was Annul. Lodestone Myr attacked, and Cornelissen threw his two Wagons in front of it. Fujita pumped it to 3/3, and bounced it back after damage went on the stack. He didn't have enough mana left to replay it, but for two mana he was able to summon Somber Hoverguard. Thanks to Relic Bane doing its thing for most of the game, Fujita only needed to force through a little more damage to finish the job. Cornelissen's blocks continued to be futile as Crystal Shard just brought back Fujita's men after damage went on the stack, making the match score two games to none.

Cornelissen accelerated with a second turn Myr, and Fujita's Neurok Familiar hit a Myr Enforcer. Empyrial Plate came out and went right on the Myr, giving Cornelissen a 5/5 that would become a 6/6 on his next turn. Fujita's Familiar attacked for a point of damage, and he followed up with Yotian Soldier. The 6/6 Myr got through for damage, and Cornelissen was content to sit back on his cards and let the Plate try to win the race. Fujita's creatures came through for two damage, and he played a Myr Retriever followed by AEther Spellbomb, leaving one blue mana open. With Fujita's board growing and a Spellbomb threatening a tempo swing if need be, Cornelissen could no longer afford to ride Empyrial Plate to victory. The Myr attacked and got through for damage once more, then he played a land and summoned a War Wagon.

Only the Familiar attacked this time, and Fujita summoned a Nim Shrieker. Cornelissen's Myr attacked and was bounced, and it came back out along with Lightning Greaves, which went right on it so it could tap for mana. This let Cornelissen play Neurok Familiar in the same turn, and it hit Goblin Dirigible. The Greaves were then moved to the Familiar, giving Cornelissen an untargetable blocker for the Shrieker. Fujita put Relic Bane on an artifact land, and was content to sit back for a turn. Cornelissen tapped six for the Dirigible, and equipped it with Lightning Greaves. Fujita played a Frogmite for free followed by Myr Enforcer for one mana, and used Terror to kill Neurok Familiar. Fujita then sent his Shrieker in for an attack, and Cornelissen blocked and traded with his Dirigible. Cornelissen summoned Tel-Jilal Archers, and put the Greaves on the War Wagon. This brought the game to a stalemate, but Relic Bane was slowly taking Cornelissen out of the tournament, two life points at a time.

Things improved drastically thanks to Spikeshot Goblin, which donned Empyrial Plate. This put Cornelissen in a good enough position that he felt comfortable attacking with his pro-artifact Archers to deal some damage and bring Fujita to five life. Fujita attacked with the Enforcer, and Cornelissen blocked with a Myr and a Wagon, looking for a trade. When damage went on the stack, Fujita played a Scale of Chiss-Goria to save his 4/4, but Cornelissen had Annul. He then drew, and sat back on his hand of two cards. With Spikeshot Goblin getting a +2/+2 bonus and Fujita at five, the game took two turns to end.

Cornelissen mulliganed his opening hand. He had a first turn AEther Spellbomb, and Fujita accelerated with a Myr. On his third turn he played another Myr, but had no third land and only blue mana. Neurok Spy provided Cornelissen with a good damage clock, and Fujita summoned Somber Hoverguard. The Spy attacked for two damage, and Cornelissen played Goblin Replica. Fujita found the swamp he had been looking for, attacked with the Hoverguard, and played Wizard Replica- Cornelissen had Annul. Fujita wasn't done, and played Frogmite for one mana. It blocked the Replica in combat, and AEther Spellbomb bounced it back after damage went on the stack. Since he was lacking any red source of mana, Cornelissen chose to use the rest of his turn to bring out a War Wagon. 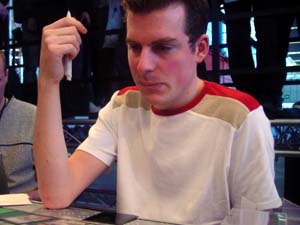 Terror dealt with Cornelissen's Neurok Spy now that AEther Spellbomb was out of the way, and Fabricate searched up Crystal Shard. The Wagon attacked for three, and now that Cornelissen had drawn a mountain, he was able to play Spikeshot Goblin. Luckily for Fujita, it wasn't nearly as intimidating in relation to the board without equipment. His Hoverguard dealt three more, and Myr Enforcer followed. After thinking through his options, Cornelissen played Goblin Replica. Fujita played Crystal Shard and attacked with his creatures. War Wagon and a Spikeshot damage looked to take down the Enforcer and force Fujita to use Crystal Shard to save it, but Scales came out to get the job done without any tempo being lost. Goblin Replica was able to block the Enforcer on the next attack and destroy Crystal Shard, but Cornelissen was out of resources. To make matters worse, Fujita's Neurok Familiar hit Mask of Memory, clinching the match.