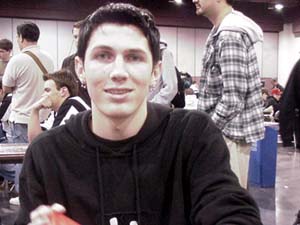 Turian is just coming off his top 8 in Amsterdam to his undefeated streak in the swiss portion of this Grand Prix. Needless to say he is happy at the great success he has had recently before his final Pro Tour coming up at PT San Diego.

Mitchell Tamblyn has been out of Magic for awhile, but when he was 15, he was 5-0 at a Pro Tour and featured as the child prodigy. Mitchell said that taking time off of Magic was really good for him but he was glad to be back.

Mike: "I'll show you mine if you show me yours…"
Mitchell: "Let me look whats in my deck - oooh!" as he passes over a Molder Slug, Grab the Reins, and Sword of Light and Shadow.

Mitchell won the coin flip and as they were about to start the match, Mike's cell phone rang.

Got to love the timing.

The first game started off slow, with Mitchell playing a Turn 3 Krark-Clan Stoker and Mike following suit with a Bottle Gnomes. Mitchell played yet another Stoker. Mike responded with a Nim Shambler.

That is about when Mitchell played out Molder Slug and the game looked very different all of the sudden. Mike had no real way of dealing with the Slug, and he would have to be very aggressive to have any shot of winning. Luckily, Mike is a very aggressive man. Mike played out two Fangren Hunters in the next two turns while his Shambler got Barbed Lightning tossed at it with entwine. The Slug continued attacking, and the Fangren Hunters were happy to race.

The Krark-Clan Stokers were not able to attack at all due to the Fangren Hunter situation, but they were joined by a surprise Tangle Spider to triple block one of the Hunters. Mike chose to kill the two Stokers over the Spider, and played out Tel Jilad Chosen. Mitchell attacked with the Slug and the Spider, threatening to put Mike on a very low life total, but Mike blocked the Spider with the chosen and cast Predator's Strike, taking out the threat. The race continued.

Mitchell eventually played out the Sword of Light and Shadow that he was holding, equipped the Slug, and attacked getting back Tangle Spider. He then played a Talisman to protect the Sword for an extra turn. Unfourtunetly for Mitchell, the next turn Mike had One Dozen Eyes to make five 1/1's, easily giving him enough guys to halt the attack and win the race.

Game 2 started out slow again with cards like Steel Wall, Bottle Gnome, and Tel-Jilad Exile being the first cards to hit play. Mike played the first real aggressive cards - Nim Shambler and Juggernaut. Mitchell played out a not-so surprising Tangle Spider to attempt to block the Juggernaut, but he decided not to because of the Arcbound Hybrid Mike had just played. Mike had the ability to sacrifice it to his Nim shambler at any time to give his Juggernaut a little extra juice. Mitchell took the attack and went to 15 life. 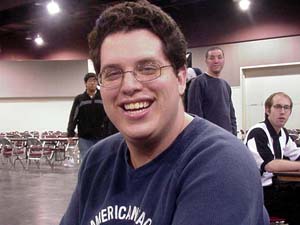 After a turn of creature standstill, Mike cast One Dozen eyes again for five 1/1s, then alpha striked with an Echoing Courage in hand. Mitchell blocked a bunch of 1/1's and was going to accept 11 damage, but after the courage he found himself left with only two of his five creatures, staring down nine of Mikes.