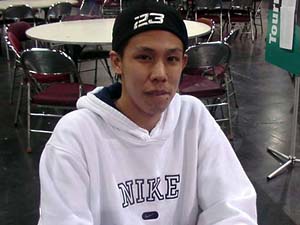 Rubin and Ken Ho are old friends from the Bay Area. They play together frequently although both players profess to have little more than a passing interest in professional Magic. While they were shuffling Patrick Sullivan walked by and laughed at the former Pro Tour Champion Ken Ho. "I told you you'd be back!"

Ken laughed and shook his head in denial. This was just a local tournament for him and if he avails himself of the Pro Tour slot it will only be because it is for San Diego. Ben is having a hard time backing up his claims of disinterest. After winning Anaheim he attended Amsterdam despite his assurances that he would not do so. He even went so far as to write an article for one of the major websites about his deck.

Ken Ho: "Do you want to play one game for the match?

Ken turned to the judge and asked if that was possible. Sheldon explained that it was not illegal. One player could concede after a game loss but the agreement would not be seen as binding. Ken laughed; he had no intention of playing only one game. Ken and Ben are among the most deliberate players in the game and this match was expected to take a lot of time.

Ben was saddened, "We're not one-gaming it?"

"I was just messing around."

As they settled in for the match Ken emptied his pockets onto the table to get more comfortable. This including taking out his wallet prompting Ben to crack wise. "That's a pretty thick wallet Ken. You must have a lot of ID cards.

Neither player mulliganed. Ken had a turn one Disciple of the Vault on the draw. Ben had a turn two Arcbound Stinger and was not willing to trade it for the Disciple when Ken attacked the next turn. Ben got in for one on his next turn and played a Loxodon Warhammer. Ken played a Chittering Rats to stunt Ben's development and prepared to be Hammered on the next turn.

Ben was out of land but did fly over for four with his Stinger. Ken killed the flier with a Consume Spirit and took Ben back down to eighteen on the attack. Ben missed his next land drop as well and played a Thunderstaff. Ken could no longer attack with his Disciple and had to content himself with getting in for one point with his Chittering Rats. He followed with a Woebearer.

Ben found his fourth land and made a Cobalt Golem. Ken kept 'pressure' up and Consumed Spirited the Golem for four. Ben played a Hematite Golem on the next turn and Ken dug for answers in the bottom of the frame. He cycled a Spellbomb, which yielded a Skullclamp, and he dug for two more cards at the cost of his Disciple's life. That got him a Bonesplitter and he put them both on his Rats and attacked Ben down to nine.

Ben dug for cards as well with a Thoughtcast. He equipped his Golem and attacked for four to go up to thirteen. He played a Steel Wall and passed the turn. He fell back to nine on the attack from Ken who then played a Slith Bloodletter and clamped it for two more cards. He then moved both equipments over to his Woebearer.

Ben's pace slowed considerably as he weighed the options of sitting back and of attacking. After a long tense wait he smiled and cast Sculpting Steel copying his Warhammer. "Isn't that cool?" He also played a Hoverguard Observer. Ken ate the Steel wall with his Woebearer and then moved the equipment over to his untapped Rats and braced for impact. Ben played a Frogmite and then doubled up the Golem with the copied Warhammer. He sent the Hematite Golem into the waiting arms of the Rat and double pumped his guy. He did thirteen damage to Ken and gained twenty-two for himself. Ken did get to draw two cards. He played a Grimclaw Bats on the next turn and promptly clamped him for two more.

It was almost the most amazing comeback ever. Ben double equipped the Frogmite and sent both creatures into the red zone-Ken was at four. He had drawn the Murderous Spoils and killed the Frogmite and the two Warhammer came under his control. Ben remembered the other ability of the Thunderstaff and pumped his Hoverguard for the final point of damage.

Ken had no plays until turn four after Ben played a Bottle Gnomes. "That's what I am talking about-turn four Iron Myr. Right on time."

Ben attacked for one with the Gnomes and played a Cobalt Golem. Ken had to think about whether he was best served using his Promise of Power to make a 5/5 flier or draw five cards deeper into his deck. When he almost played a Swamp it looked like he was going to take the card drawing path but he didn't commit the land to the table and made a 5/5 token creature.

As soon as he passed the turn Ken began to shake his head in obvious frustration with himself. After holding off on playing the land before the Promise he completely forgot to play it all on the turn. With a Pewter Golem ready to go next turn and a Consume Spirit in hand that could have been crucial. Ben missed his fifth land and tapped out to play an Arcbound Crusher.

Ken was still reeling from his previous turns misplay and considered not playing the Pewter Golem until next turn when he could use the regeneration ability. He played it in the end and had Iron Myr as his only available mana.

Ben's land was still avoiding him and he played Sculpting Steel to copy the Crusher. He used Thoughtcast for two cards and attacked for five with his Crusher and the Golem. Ken could not block without losing his Golem and continued to berate himself as he took unnecessary damage.

Both players were taking agonizing amounts of time debating each turn. Ken finally decided to play a Disciple of the Vault and attacked with the Pewter Golem and the flier. Ben blocked the Golem with his Gnomes and gained three life and only fell to twelve.

Ben played an Arcbound Stinger and attacked with his 4/4 Crusher. After Ken took the four Ben played a Krark-Clan Shaman that he had sided in. Ben chump blocked Ken's next attack and made his copied Crusher bigger by sac'ing the Stinger before his Shaman died in combat. With the Disciple, Ben lost an additional two and Ken took him down to six with a four point Consume Spirit. Ken went to fourteen.

With two trampling Crushers Ben should have been able to get past Ken's Woebearer that was on guard duty. He did not have enough mana to play spells that would have saved him and he died when he ran out of flying blockers and Ken drew into another Disciple that gave the GP Anaheim winner no blocks that could save him.

Ben played a Vedalken Engineer the turn after Ken led off with Bonesplitter. Ken answered with Iron Myr. Ben had no big artifact to bring out on turn three and attacked with the blue elf. Ken wasn't trading and took one. Ben played a Neurok Prodigy. Ken killed the Engineer with a Consume Spirit and attached the Bonespitter to his Iron Myr.

He took two in the air from the Prodigy but once again Rubin's mana development was halted at three. He played a Bottle Gnomes and passed the turn. There was no attack for Ken and he used his Myr to play a Woebearer on the next turn. Ben's fourth land allowed him to copy the Bonesplitter with Sculpting Steel and put it on his Gnomes and attacked for five.

Ken played Promise of Power as a 3/3 flier and sent his Splittered Woebearer in for four. Ben moved the Bonesplitter to his flier and attacked. Ken put his 3/3 in the way and Ben saved it with a discarded Frogmite and replayed it. With two cards in Ben's hand, Ken cast Chittering Rats and then killed the Prodigy with Consume Spirit. Ben could not save it and the Woebearer got in for another four.

Ben played a Chromescale Drake and revealed a Great Furnace, Thoughtcast and Krak-Clan Shaman. He only got to keep the first one. He played the Furnace and equipped the Golem. Ken untapped and took the copied Splitter when he used Murderous Spoils on the Golem. He put the second Splits on the Rats and attacked for six. Ben thought about chumping with his Drake but opted to take six instead.

Ken had his head in his hands when Ben tapped three mana but it was only for Thoughtcast. He played the Warhammer that he had just drawn but only had two mana left-not enough to equip. Ben was forced to chump with the Drake. When ken played out two more creatures it was all but over. 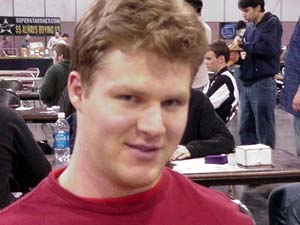 Ben Shattered a Pewter Golem and machinated for four cards but he could not survive another turn.

The match had taken so long that Dave Humpherys had already ripped through his bracket and was awaiting the winner of Ken Ho vs. Ian Spaulding at the final table.