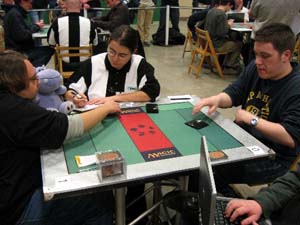 are only two Spanish players in the Top 8 and one of them has to face Kai Budde in the Quarterfinals. Marrero drew that dubious honor. The crowd is leaning against the barriers to catch all possible glimpses on the action on this table. If Marrero loses no one will blame him, but if he wins... it will be almost like winning the Grand Prix for the crowd, and even if he didn't press on to win he would have at least stopped the Juggernaut right here and now.

Kai opened with Pyrite Spellbomb and Jaime promptly blew it up before playing Yotian Soldier, Auriok Glaivemaster and Auriok Bladewarden. The German played Raise the Alarm but had nothing else for the time being, locked as he was at two lands.

The tokens traded with the pumped Glaivemaster and Kai again missed his third land drop. He was forced to discard. Marrero greedily pounced on that weakness dropping creatures as fast as possible to put the pressure on his mana-screwed opponent.

Budde found his third land and used Barbed Lightning to kill Glaivemaster and Wizard Replica to stop Alpha Myr and Arcbound Worker but Marrero had the Blinding Beam to keep it out of the way. At two life Kai drew one final card and conceded.

They both kept their hands and Marrero came out with a cycled Spellbomb but still missed his second land drop.

Kai: "We are having very good games here."

As in the first game the player that wasn't mana-screwed quickly pressed on. Kai played Raise the Alarm, Vulshok Morningstar and Hematite Golem before the Spanish even found his second land. Then he played Oxidda Golem.

Jaime used Blinding Beam to buy an extra turn and attacked with his Bladewarden. On the "extra" turn he played Alpha Myr but by then he was too far behind. At ten he could only watch as Kai Budde sent his whole crew in and pumped his Golem to finish the second game.

Kai: "Maybe we can play a real game now."

Again Marrero went through his strange ritual with his stuffed toy much to the delight of the Spanish crowd. They both started the game with Spellbombs, which they both cycled. Apparently Marrero's stuffed boy has better mojo than Budde because the Spanish kept on going while Kai missed his third land drop.

He played Vulshok Morningstar and pounded his deck. The deck yielded and gave him his third land and second color. Jaime already had creatures on the table but Budde fought back with Wizard Replica and Barbed Lightning.

Jaime did his math and sent his creatures. The German hardly blinked before blocking. Marrero used Savage Beating to trade Arcbound Worker for Loxodon Punisher. Budde seemed happy with that. He sent his Golem in before playing and equipping Skyhunter Patrol.

On the next turn the Patrol grabbed Fireshrieker along with the Morningstar. Marrero took eight damage down to eleven. When Kai tried to attack on the following turn Jaime used Blinding Beam. The German played Loxodon Mystic to hold the fort for a while. 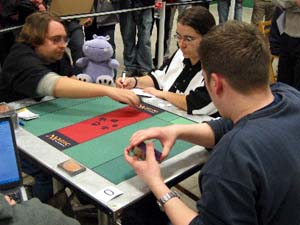 On the next turn the Mystic grabbed all the equipment along with a Leonin Scimitar and ate up Yotian Soldier to save Jaime Marrero.

The Spanish drew one more card and facing three good creatures with three great equipment cards he could only extend his hand.

Kai now plays against the winner of the Levy-Alcaraz quarterfinals.