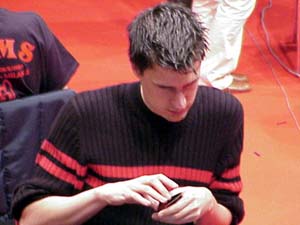 players were rubbing their eyes from the bright camera lights as they shuffled up for their quarterfinal match. Neither had gotten much sleep. There was too much on the line not to burn the candle at both ends. This is Jelger Wiegersma's second Pro Tour Top 8, the last coming at New Orleans two years ago. Luigi Sbrozzi was in the hot seat for the first time. Wiegersma is playing the tournament's defining deck: Affinity. Sbrozzi is playing a variant of the Big Red control deck, but the lack of Furnace Dragons in his sideboard made this matchup less than stellar.

Before the match started Wiegersma asked Sbrozzi about his career as a player. Sbrozzi said he'd been playing about four years, and they shared Grand Prix stories. Sbrozzi mentioned Turin, where his team finished 25th.

Wiegersma started with Darksteel Citadel, and hesitated before playing an innocuous Ornithopter. Sbrozzi came back with Spellbomb. Wiegersma's draw was slow. He made an Aether Vial a turn late only to have it Detonated on Sbrozzi's turn. The slow amassing of resources continued, this time with Disciple of the Vault and Myr Retriever. Sbrozzi wasn't about to let the Disciple stick around and offed it with Fireball.

Finally Wiegersma got something worthwhile on the table: Arcbound Ravager. Before it could come into play Sbrozzi took down the Retriever with the Spellbomb. Wiegersma got back his Vial. Echoing Ruin took out the Ravager before it could get crazy. Wiegersma hit for one with his enhanced Ornithopter and played his Vial and a Myr Enforcer. Unfortunately for him Sbrozzi was about to bring out the big guns.

Arc-Slogger came into play, and Wiegersma could only shake his head slightly. He flew over for damage and watched as Sbrozzi dropped another Slogger. Wiegersma made another Disciple and dropped a second Enforcer on his turn. Sbrozzi bashed in and Wiegersma considered blocking before deciding to take it on the chin. He fell to seven. Sbrozzi had a third Slogger.

On the next attack the Sloggers decimated Wiegersma's board. Thoughtcast provided him with no miracle and he packed up his cards. 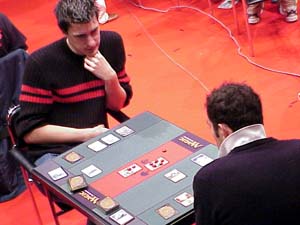 Wiegersma started with Aether Vial and Myr Retriever, which Sbrozzi cut down with Fireball before there was anything for it to rescue. The Vial put an Arcbound Worker into play at end of turn, and then Wiegersma untapped and and played a second Vial and big Myr Enforcer. Sbrozzi played Pyrite Spellbomb and waited for the Enforcer to hit the Red Zone before he Shattered it. Wiegersma's Vial gave him an instant-speed Ravager to eat the 4/4. He played a replacement.

Sbrozzi shot down the Worker with his Spellbomb. Wiegersma naturally ate it. Echoing Ruin took out the Enforcer, and he ate that too. The Ravager bashed in for five. Sbrozzi put Jens in the way for a turn. Next came Genesis Chamber. Sbrozzi tried to calm the Ravager down with Damping Matrix, but Wiegersma's Vial let him have a second at instant speed, and he grew it to 3/3 by eating his Vials. Sbrozzi also had a second Simulacrum, but was clearly on the back foot.

Sbrozzi's token took one for the team while Jens ambushed Wiegersma's 1/1. Frogmite gave Wiegersma still more men. Jens chumped for a turn, but yielded an Electrostatic Bolt that would only shift the counters onto another creature. A turn later Sbrozzi was dead.

Sbrozzi led with Pyrite Spellbomb and had no turn-two play while Wiegersma dropped Chromatic Sphere and then Myr Retriever. Sbrozzi cycled his spellbomb and Fireballed the Retriever. Wiegersma showed him its twin. Facing no pressure, Sbrozzi played his fourth land and waited.

Wiegersma didn't keep him waiting long. He cracked the Sphere to make a Genesis Chamber. Then came Arcbound Ravager and two Myr Enforcers, along with their three tokens. Not too shabby. Sbrozzi leveled an Electrostatic Bolt at the Ravager, and Wiegersma gobbled the tokens and Retriever (picking up the other Retriever) to save it. He was not thrilled that Sbrozzi had the second bolt. He pursed his lips. He surveyed his board and scooped away two lands, the Chamber and one of his Enforcers. His eggs were in one very big basket.

Sbrozzi untapped and put Echoing Ruin on the Ravager. The counters slid very easily onto the Enforcer, and it hit hard, leaving Sbrozzi at six. Worse, Wiegersma had a second Ravager. Sbrozzi made an Arc-Slogger and gave it back. Wiegersma counted, then played his Retriever, ate it and picked up an artifact land from his graveyard. He swung in and the unblocked Ravager ate his board, dealing exactly six.

Neither player touched their sideboards for Game 4. Wiegersma started with Arcbound Worker and lost it to Fireball, then had his Ravager made less exciting by a Damping Matrix. He played Ornithopter and Skullclamp with an implied shrug. Sbrozzi aimed Echoing Ruin at his pair of Vault of Whispers. Wiegersma turned to a nearby Gabriel Nassif and warned him that he'd be going to Game 5.

He tried a Frogmite and lost it to Electrostatic Bolt. Sbrozzi brought out the mighty Arc-Slogger. Wiegersma showed him the third Vault and Sbrozzi sighed, knowing that he wasn't able to keep him off Terror mana. Sure enough, the Slogger went to the bin. Sbrozzi had a replacement. Wiegersma flew over for a damage and chumped with his Ravager, giving the counter to his Ornithopter. He even had a pair of Myr Retrievers to keep the Slogger at home. Sbrozzi Shattered the 'Thopter before it could get him too low. 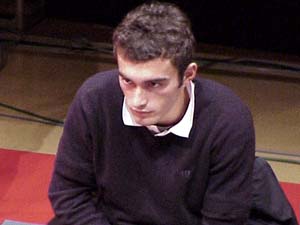 They stared at each other. Wiegersma made an Enforcer, and that got Shattered too. Unfortunately, when he showed Sbrozzi Genesis Chamber, he was allowed to keep it. He started building up his 1/1's, but his swarm plan was cut short when he ripped another Terror. He put the Slogger on Ice and hit for seven. Sbrozzi was holding useless redundant Damping Matrices. He drew another dud and then extended the hand.