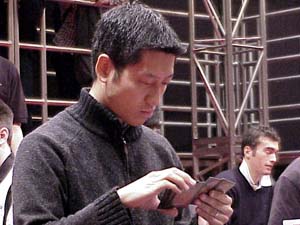 Masashiro Kuroda, this is a day of redemption. In the past, he was notorious for going undefeated on day one of a major tournament, but failing to make the Top 8. He did it at Japanese Nationals, Grand Prix Sapporo, and Grand Prix Kyoto. With a bad start yesterday it seemed that the trend was destined to continue, but Kuroda came back to form and is now the only Japanese player in the Top 8. Recently married, Kuroda had his wife cheering him on from the stands along with the local Japanese players.

Kuroda and his opponent, Italy's Raffaele Lo Moro, are running versions of Big Red. The difference maker here may be the fact that Lo Moro's deck is packing a lot more artifact destruction, while Kuroda has more burn. That may make a difference where the metagame is concerned and you want to be able to destroy Ravagers and Skullclamps, but in a red-on-red matchup, the efficient, massive damage spells tend to be what wins games.

Kuroda took a mulligan, and strangely Lo Moro declared a mulligan of his own as Kuroda started shuffling. Occasionally people will not wait until their opponents declare all their mulligans before taking one of their own in the interest of saving time, but it was odd to see someone do it in the Top 8 of a Pro Tour where you'd theoretically want every advantage you can get.

No action happened until turn four, when Lo Moro played Solemn Simulacrum. Kuroda brought out an Arc-Slogger, and Lo Moro answered back with one of his own. Kuroda's Slogger took out Lo Moro's, with the help of Barbed Lightning. Another shot killed the Simulacrum, clearing the path for an attack for four. Lo Moro played another Simulacrum, and Kuroda targeted it with Detonate, but Lo Moro responded with Electrostatic Bolt, which cost him a card but prevented two damage. This let the Slogger get through for damage again, but it got Flinged at Kuroda on the following turn thanks to Lo Moro's Grab the Reigns. Lo Moro played an Arc-Slogger of his own soon after, but Kuroda's early damage made it insignificant. He cast Pulse of the Forge on end step, then used Fireball to deal the final points of damage.

Lo Moro kept his opening draw this time, but Kuroda didn't. Lo Moro's Talisman was destroyed with Echoing Ruin, and both players missed their fourth land drop. Turns went back and forth with each player hoping to draw land- Lo Moro found one first, playing a Simulacrum. It died to an Electrostatic Bolt, and Kuroda still only had three mana sources. A second Simulacrum was killed by Kuroda's Fireball, and Lo Moro played a third, along with Pyrite Spellbomb. Kuroda finally found a land, and played a Simulacrum of his own, but had a lot of catching up to do if he was going to put up a fight this game. Detonate killed his Simulacrum and Lo Moro's attacked, bringing Kuroda down to fourteen.

Molten Rain destroyed one of Lo Moro's Stalking Stones, and a Bolt killed the Simulacrum. Lo Moro activated his remaining Stalking Stones on end step, and during his attack, Kuroda targeted it with Barbed Lightning with entwine. In response, Lo Moro cast Grab the Reigns to throw it at Kuroda. Massive Fireballs were thrown back and forth, but Kuroda was able to squeak out the win by casting a second Fireball, along with Shrapnel Blast. 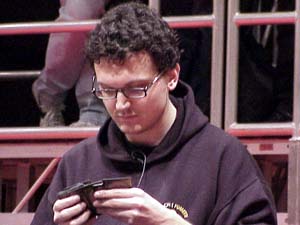 Lo Moro summoned a Simulacrum, and Kuroda killed it with a Bolt. He untapped, activated two Blinkmoth Nexuses, and attacked to deal two damage. Lo Moro summoned an Arc-Slogger, and it got through for damage on the next turn. He then played another Simulacrum, and Kuroda sent Barbed Lightning to the dome. A Fireball killed the Slogger, and Lo Moro responded by shooting Kuroda twice. The Simulacrum dealt two damage, and Kuroda killed it with a Bolt on his turn before destroying a Talisman with Echoing Ruin. Lo Moro's Fireball for seven brought Kuroda down to three, and on end step Pulse of the Forge brought Lo Moro to ten. With two Darksteel Citadels, two Blinkmoth Nexuses and two mountains, he couldn't maximize efficiency off the Pulse. He attacked with one Nexus, and cast the Pulse again. This brought Lo Moro within Fireball range, giving Kuroda the match.