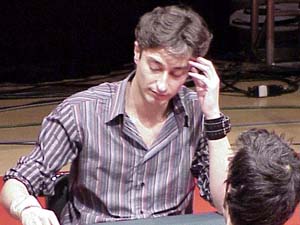 of the wonderful things about the Pro Tour is that you can arrive full of expectations about what you are going to see and still be surprised in the end. Sitting across from each other in the Top 8 are two very different mono-red Control decks. Alex Peset of France was piloting the version that was most similar to what most playgroups throughout the world had come to: Turbo-Dragon. In Turbo-Dragon, the Talismans and the Artifact Lands would both count as double-mana towards a Dragon, and Alex's version also tossed in some Seething Songs to push out early an Arc-Slogger or Dragon on the likely chance that the artifact mana would get attacked. Packing burn and artifact kill, Peset's deck has all of the things that we would expect in a competitive mono-red Control deck.

On the other hand, we have the surprising Stefano Fiori's deck. Looking more like a block version of Red Deck Wins, Fiori instead chose to focus primarily on attacking resources, and with Slith Firewalker, the deck could certainly take advantage of the time it would gain. The Italian's deck wouldn't have much in the way of pure burn, but it would certainly keep things tricky for any opponent that was thinking they could keep artifacts on the table.

Stefano got the kind of start that you really hope for. Winning the flip, his opening hand was solid, with several land, a Slogger and burn. His opponent had to double mulligan into a hand with two Shatter and land. Stefano would cycle an early Spellbomb and follow up with a turn 3 Detonate for Alexandre's Talisman. By turn five, he dropped the Slogger against a table full of nothing.

Alexandre tried to get back into the game with a turn five Solemn Simulacrum, only to have it Detonated. His hand was weak: two Shatter and two Seething Song, making it seem almost as though he had Mulliganed 6 times this game already. After the Detonate, Stefano put him on 10 life with Arc Slogger's attack. A top-decked Furnace Dragon came out onto the table with the help of Seething Song, but it wasn't meaningful. Arc-Slogger was activated 3 times, and a Fireball finished the score.

Sideboarding:
Both players employed the eons old sideboarding technique of shuffling their entire board into the deck and removing 15 cards. This handy little technique makes it difficult for an opponent to guess exactly what kind of changes are going on between games. Luckily, I was able to get a glance at what happened: Stefano brought in Grab the Reins and Shatter, replacing Echoing Ruin, and shaving off a Shatter and Bolt; Alex brought in Shrapnel Blast and Shunt, cutting Dragons and Shatters. During the rest of the match each player made a show of changing board cards, but neither actually did it.

Alex's hand was not in the rough shape it had been in the first game, with a mitful of burn (2 Pulse of the Forge, and a Shrapnel Blast), mana, and a Shunt. Stefano's was also solid, full of one of each of his men (Slith, Slogger, and Jens), and mana.

The game started out slowly, with mana on both sides. A turn 2 Slith Firewalker was killed by a turn 3 Arc-Slogger powered out by Seething Song and a Talisman. Stefano tried to set up to bring out his own Slogger by dropping Solemn Simulacrum but Alex's Slogger would not be denied some kind of retribution for the first game. Holding an immense amount of burn, Alex used all of it and the Slogger itself to finish the game by turn 5, blowing the artifact creature out of the way and throwing everything else at Stefano's face.

Wizards R&D has long talked about how they don't like mana denial being too good. Losing to cards like Stasis, Armageddon, and Winter Orb just don't make the game fun. Land Destruction has been purposely held back with each set just to make the games interesting. This game was an illustration of why they feel that way.

Stefano started out with land, and on turn 3 it all began to go badly for Alexandre. Molten Rain wasn't all that surprising. What was a kick in the teeth was the next turn. A Detonate on a Great Furnace and another Molten Rain was bad enough, but when the next turn brought a third Molten Rain, the board looked bleak indeed: Stefano's 4 land were the only permanents on the table. A Slith Firewalker started going to work, and Shatter destroyed Alex's next mana, a Great Furnace. The turn that Alex drew a Mountain to power his Electrostatic Bolt, the Slith was already a 3/3 and it would go the whole way.

Here, both players had excellent hands. Alex held three land and a Talisman, a Shunt, Shrapnel Blast, and Handsome Jens the Solemn Simulacrum. Stefano held a pair of Mountains, a pair of Detonate, Grab the Reins, Pyrite Spellbomb and Arc-Slogger.

The Detonates would begin going to work on turn 2, tearing at a pair of Great Furnaces. Alex's Talisman helped him drop another Talisman to keep a reasonable amount of mana on the table, and an Electrostatic Bolt stopped Slith Firewalker from getting anywhere.

The game slowed down for a few turns, with Alex finally dropping Jens onto the table on turn 5 rather than on turn 3 as planned. The Arc-Slogger on the other side of the table was smashed by a Shrapnel Blast, and a Shatter from Stefano left the board as Solemn Simulacrum and 4 mana on Alex's side, and 5 mana on the other.

Jens marched onwards, eventually drawing Alex to 12 before Grab the Reins stole it and tossed it back into his face. A Fireball smashed another of Alex's men, an Arc-Slogger, and a second Arc-Slogger from Alex met a second Grab the Reins from Stefano.

With a clear board, Stefano pushed back into the game with an Arc-Slogger of his own, prompting Alex to spend some time thinking. His hand included a Pulse of the Forge, a Shunt and a Flamebreak. After several minutes of thinking (most likely considering whether or not to mana-burn himself), he untapped to draw a Pyrite Spellbomb. Now, he thought even longer. With Flamebreak and Pyrite Spellbomb, he would be able to kill the Arc-Slogger, but would not be able to hold open enough mana to Shunt anything. At this point, there was so much mana on the table on Stefano's side, a Fireball would be terribly devastating. He grabbed paper and pen and worked out some figures in his head for several minutes before passing the turn back to Stefano.

What a turn it would be. Stefano used the end of the turn to activate the Slogger, attacked on his own turn, activated the Slogger some more, and went for a Fireball for 4 for the win. The lifetotals were 4 to 12. Alex Pulse of the Forged Stefano to 8 (keeping his Pulse) and tapped out to Shunt the Fireball back at Stefano to bring him to 4. Untapping, his Pulse nailed the coffin shut. 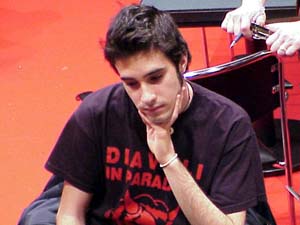 Again, both players kept good hands. Alex was with 4 land, a Slogger, a Bolt, and Jens the Solemn Simulacrum. Stefano held 3 Mountains, a Slith, Grab the Reins, and two artifact kill. As was to be expected, the first two turns involved the Slith dying to Bolt. Turn 3, Alex opened up an early Arc-Slogger when he tore a Seething Song from the top of his deck.

Stefano would try to muster some kind of defense with a Solemn Simulacrum, but it was quickly brushed aside. Backed by a wee bit of burn, the Arc-Slogger ended the game on turn 6. After the long and exciting game 4, such a quick end made the entirety of the match seem like it had been decided in the previous game. If Stefano had only Fireballed before the attack on that game (dropping Alex to 8), it would have forced the Shunt then. After the attack, Alex would not have been able to bring back the Pulse, and would have been unable to win that game.