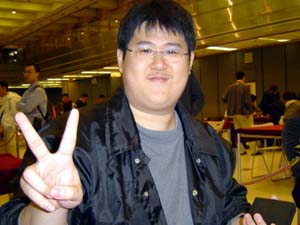 deck was not what you would normally qualify as good. He went into mono-black a little too late in Mirrodin and other players around him got the same idea. His deck had no Echoing Decay, Chittering Rats, or Grimclaw Bats as a result. Gabe always has a smile though and laughed off his misfortune and clowned for the spectators.

When Chi-Chung mugged for his Top 8 photos Gabe scolded him on how to play to the crowd, "No Peace signs, c'mon!" Chi-Chung gave Gabe's deck a bizarre cut that bordered on a forty-pile shuffle. Gabe chuckled, "Interesting." He mimicked the cut and divided up his opponent's deck as well.

Chi-Chung won the roll and kicked things off with a Gold Myr. The mana man got in for one and Gabe played a Thunderstaff on his third turn that meant the Taiwanese player would need to bring a better choice of weapons to the battle. On the fourth turn he summoned a Titanium Golem and a cocked eyebrow from Walls.

Walls killed the Myr with Screams from Within and then reduced the Golem to a 2/2 when it came back. He shook his head disgustedly and played a Disciple of the Vault after the Myr was dead. "I deserve to lose this match because of that one point. I hope I do, I deserve it. But I won't because he plays Titanium Golem."

"You have a spider don't you?" Chi-Chung sad nothing. He played a Den-Guard and equipped it with his Scimitar. Gabe killed the Golem with Essence Drain and the Screams moved over to the Den-Guard. Gabe equipped his Disciple with the Cloak and attacked for one point of unblockable damage.

Chi-Chung Deconstructed the Thunderstaff and attacked for two. Gabe ripped a Mind's Eye and played it but Chi had another Deconstruct. He played an Outrider with the mana and Gabe killed it and the Den-Guard with a single Terror thanks to the Screams. The enchantment was fizzled by his Whispersilk Cloak and his little beater lived to beat another day. Gabe also played a Nim Shrieker.

He put the Cloak on the Shrieker and although Chi-Chung did indeed have the Spider he could not block the Shrieker that got a tiny bit bigger each turn until Gabe had somehow won a game. 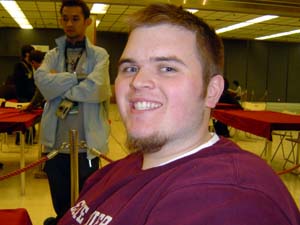 Chi Chung kept his hand but Gabe sent back a one-lander. The Taiwanese player missed his third land drop for two turns. Gabe got out to an early lead with Arcbound Worker, Leaden Myr, and Drill Skimmer. He played Mind's Eye while Chi was still stuck on three lands and simply outdrew hi the rest of the way. He whittled Chi down to six with his flier and finished him off with a Consume Spirit.

1 Scythe of the Wretched 1 Heartseeker
62 Cards