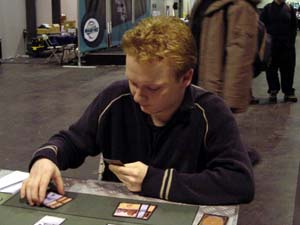 , the king of splits has done it again. Despite only having a 5% split during the swiss, his quarterfinal opponent agreed to a split before these games. This is what Frank does, and he is the best at what he does! Frank, the guy who is called the cutest amongst all magic players by his female fans, has had an impressive, yet not really awe inspiring career on the PT. He has been gravytraing for a couple of years now and is very much respected by his peers. His opponent, Kamman, who is originally also Dutch but now lives in the UK, is just at the started of his PT career. He had also made top 32 at GP Madrid though, so be wary of this up and comer.

Kamman started the game, and did so clearly signalling his deck type. Darksteel Citadel, Lifespark Spellbomb. No doubt about it, he was affinity. Frank played an early Vulshok Gauntlets, and swung with a turn three Oxidda Golem off of three mountains while Kamman made a Lightning Greaves and a Myr Enforcer off of more artifact lands. Combined with the Greaves the 4/4 was pretty bad for Frank, as that took all the tempo out of his game. He just kept attacking with his 3/2 guy though, wanting to race against an active Lightning Greaves, and added a Cobalt Golem to the board. When Kamman played his second Enforcer though, for free I might add, Frank sighed though. Being so very cute certainly didn't help him in this situation. Add to that a Morningstar, and Frank took ten damage on turn 5! Definitely not racing anymore, Frank held back and tried to build up defences to block the 4/4 and the 6/6. Going into his traditional mathematical thinking pattern he sat there doing the math for a few minutes and just played a Spire Golem and said go. Kamman added a Nim Shrieker to the board, which was 8/1, and swung with all his men. Talk about a blazing start. He emptied his hand by turn 5 and was attacking for infinite each turn. Frank traded and chumped, and still took 4 damage, bringing him down to two, with the 4/4 and 6/6 still on the board. He played an Elf Replica, his favourite guy, and equipped his Cobalt Golem with the Gauntlets, planning to block the 4/4 with the 6/5 and chump the 6/6. Kamman then attacked with just the 6/6 and a double block killed the Cobalt Golem. Frank made his Elf a 6/4 on the next turn though, and played another Grey Ogre: Neurok Transmuter. Kamman had run out of steam and could just say go, not drawing anything with which to kill the one they call Fat Frankie. Kamman even had two more equipments, including a Bola, but with the Greaves stuck on the surviving Enforcer, he couldn't even equip it. He seemed to have fizzled and had to draw more creatures. Of course the Greaves meant Frank could also not attack safely, since he only had 2 life left, but he was certainly thinking about it after playing an Auriok Siege Sled. Kamman's next turn was a sigh and a "go", and then Frank started thinking. He eventually attacked with the huge Elf, which brought Kamman to 8, and then played Looming Hoverguard, making certain that Kamman wouldn't have a good draw for another turn. That was enough as next turn enough guys could come over to kill Kamman! Frank made an amazing comeback to win the game. It turned out that Kamman did have the creatures, but that his Artifact lands on the board were all off-color and he just didn't have the needed blue mana.

After the game Frank boarded in a swamp for a mountain. He had two Nim Replica's and wanted to make sure they could trade for the 4/4's. 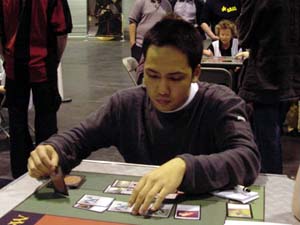 Kamman decided to start again, and did so with a mulligan. He still came out of the gates blazing though, with a turn one Arcbound Worker and a turn three Fatespinner. But still, compared to the last game it was of course sad, and that is exactly how Kamman looked. He was stuck on three Islands this time. Frank did play some lands and despite skipping his attacks he added a Pyrite spellbomb, a Morningstar, a Neurok Spy and a Spire Golem to the board, while Kamman could only muster a Neurok Spy. On turn 5 Frank skipped his draw and then played the bomb that is the Sword of Fire and Ice and put it on his Neurok Spy, attacking for four, killing Kamman's Spy and drawing a card! Kamman, stuck on 3 lands just looked in disgust and scooped up his cards.