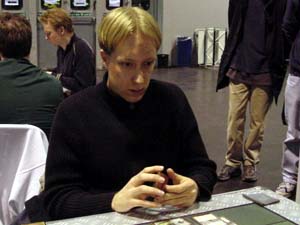 another strong European Grand Prix top 8 Mattias Jorstedt is probably the most accomplished of the players with PT Yokohama under his belt. David Grant is one of the stronger British players, having represented the national team back in 2002.

Jorstedt won the die roll and elected to go first. The game was interrupted with a mulligan from Jorstedt, but he was happy with his six cards and the game got underway. Both players had a reasonably slow start with the first play not coming until Jorstedt played a Vulshok Battlegear on turn 3. Grant's Vedalkan Engineer turned up a turn late. It accelerated him out a Razor Golem, but by this time the Englishman was facing down a Battlegear equipped Auriok Steelshaper. A Tel-Jihad Outrider cropped up to dissuade any counter attacking.

Grant took to the skies with a Hoverguard Observer but the next attack from Jorstedt saw the Outrider trampling right over Grant's Engineer with a Predator's Strike. Grant was down to 5.

Down but not out though. He attacked back for 6 and when Jorstedt tried to attack for the coup de grace Grant was waiting with a Blinding Beam. This gave Grant two turns.

It was all he needed. He attacked back for another 6 before summoning a Skyhunter Patrol. Jorstedt drew another card and then conceded in the face of a lethal attack on the next turn. He hadn't managed a single spell after Grant caught him with the Beam.

Grant mulliganed this game and again there wasn't much action until Jorstedt's Battlegear on turn 3. Grant followed with a Neurok Spy and then watched as Jorstedt imprinted Tel-Jihad Outriders on a Soul Foundry.

Grant had to move quickly before he was swamped. He cast a Slith Acscendant, which looked perfect for the situation. Another flier followed in the form of Skyhunter Patrol. Maybe Grant could race through the skies. 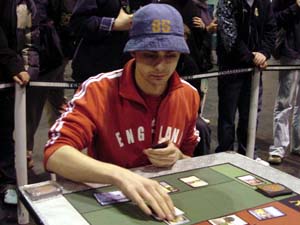 Jorstedt built up his army, he attacked with an Outrider token and then cast Pulse of the Tangle twice. Grant cut down his forces with an Irradiate and attacked back with his unblockable monsters.

Jorstedt came in for nine damage on the next turn. With an Echoing Courage and Predator's Strike in hand he could a whopping 16 damage. Unfortunately Grant was at 17 life and was able to attack over the top for lethal damage the next turn.