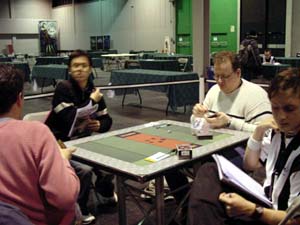 Kraft from Germany refused to drop a single point in the swiss portion of the Grand Prix. Even when he was secured in the Top 8, he didn't Intentionally Drew for a chance to rest for a while. He played and won, until there was no more rounds to win.

For the final draft of the weekend, the random pairing got him Argentinean Jose Barbero, currently living in France and taking that opportunity to enjoy quite a respectable success on the European Grand Prix circuit.

Both players drafted Black based decks: Kraft mixed it with Red, while Barbero combined it with White.

Jose Barbero opened this quarter finals with a Swamp and a Disciple of Vault, but had no other permanents in play except 3 Swamps by the end of his thitd turn. Meanwhile Kraft had a second turn Myr Retriever, and slowed even more Barbero with the Chittering Rats that followed next.

Barbero killed the rats in that same turn with Echoing Decay, and attacked with the Disciple, but had nothing else other than his swamp number four. Facing no opposition, Kraft developed his army: first a Scavenging Scarab, then a Clockwork Condor, and on the next turn, a Krark-Clan Grunt.

While Kraft was summoning his creatures, the only play by Barbero and his 4 swamps was a Relic Bane on the Myr Retriever. It was only on his seventh turn that Barbero found his fifth land, and more important, a Plains. He tapped all his mana for an Essence Drain on the Grunt, and Kraft opted to sacrifice his Retriever to get rid of the annoying Relic Bane.

Despite the fresh life gain from the Essence Drain, Barbero was only at a precarious 5 life after Kraft's attack, and the German added a Copper Myr to the table, which made the total power of his creatures exactly the life totals of his opponent. Barbero was hoping for his second color for so many turns, but now that he had it, he just untapped and hold back behind his Disciple.

Kraft didn't felt demoralized to attack with everyone, and killed the Disciple with an Electrostatic Bolt before blockers. Whatever trick Barbero might be holding, he would have to play it now. Two tokens came from Raise the Alarm to block, and suddenly the only creature alive was Kraft's Scavenging Scarab.

It all changed in the main phase that followed the board cleaning attack. Kraft played Moriok Scavenger returning the Clockwork Condor lost in the attack, and replayed him.
A last effort blocker from Barbero's side was a white creature, so a Terror put the score on this Quarter finals 1-0 to Rene Kraft.

Jose Barbero had a much better start on the second game. He got lands from both of his color, and a nice curve. He passed his third turn with an Auriok Glaivemaster, Neurok Hoversail and Slith Ascendant on the table, while Kraft only had two Mountains.

Kraft just played a swamp and chose the option "1 Damage to all creatures and players" on the card Wail of the Nim, that acted like a third turn Barter in Blood. That really hurt Barbero's chances, who passed his turn without having a replacement creature. It was now Rene Kraft playing the role of the attacker. He played a hasted Oxidda Golem and immediately attacked.

Barbero's next plays were all neutralized by Kraft. Loxodon Mystic died to Terror. Drill Skimmer to an Echoing Ruin. Chittering Rats traded with the Oxidda Golem and a Draw from Kraft. Barbero's Vulshok Gauntlets and Neurok Hoversail couldn't stand on the way of Kraft's Scavenging Scarab and Clockwork Condor, and this game ended even more quickly than the first one. It was a sad farewell from Jose Barbero to Birmingham, but Rene Kraft is going unstoppable at this point. The semi finals await him.