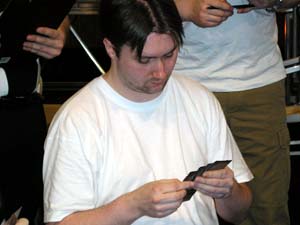 very interesting aspect of this match-up is the similarity between Jonsson and Oiso, specifically where consistency is concerned. Jonsson had made day two of the Pro Tour eight times, and on four of those occasions he made Top 8. That's a pretty amazing accomplishment, and shows that if Jonsson is put in a position to make a run for Sunday, odds are the same as a coin flip that he'll be there. By the same token, despite the fact that this is only Oiso's second season on the Pro Tour, he already has three Pro Tour Top 8 finishes, two of which were this season. In fact, his last Top 8 was in New Orleans, which was Extended. It's one thing to be a fixture on Sunday, but it's something entirely different to do it in two formats.

With these kinds of track records, Jonsson and Oiso are arguably the two most consistent players from their respective regions. The only thing missing from their accomplishments thus far is a Pro Tour victory, and one of them is going to come one step closer, while the other will have to wait.

Jonsson played a second turn Silver Myr, and Oiso had Skullclamp. Nim Shrieker gave Jonsson a threat in the air on turn three, while Oiso played Soldier Replica. Jonsson played Sun Droplet and a Myr Retriever, and attacked with his Shrieker for four damage (he also had an artifact land). Oiso put Skullclamp on his Replica, and with a grin, Jonsson stole it thanks to Murderous Spoils. Oiso winced, although he did get to draw two cards. The Shrieker and Retriever dealt six more damage, and Oiso's body language suggested that his chances of winning the game at this point were slim. He played a Clockwork Condor and an Arcbound Worker in an attempt to put up some resistance, and Jonsson played Thoughtcast to get ahead a little more on cards. Skullclamp went on the Myr to provide even more cards, and Jonsson played AEther Spellbomb to bounce the Condor. The Shrieker got through for five, and the Retriever was blocked by the Worker, getting back the Spellbomb. Oiso drew a card on his turn, and quickly conceded.

Oiso had Skullclamp on turn one, and Jonsson once again played a second turn Myr. This time, Oiso used Deconstruct to kill it, and played Pearl Shard in the same turn. Jonsson played Neurok Prodigy, and a turn later brought out Nim Shrieker. Oiso summoned Fangren Hunter, while Jonsson played Chromatic Sphere and Myr Enforcer to make his Shrieker bigger, sending six damage total through the air. Oiso stopped the Shrieker with Arrest and put the Skullclamp on his Hunter, then passed the turn. With Pearl Shard able to nullify the Prodigy's attack, it seemed that things were stabilized. 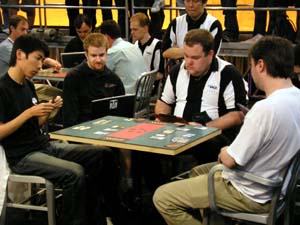 However, this game proved to be more of the same. With a sly grin and a shrug, Jonsson cast Murderous Spoils once again, as Oiso's expression said "I can't believe this" in a way that transcends cultural boundaries. Jonsson seemed to feel a little guilty about it, or at least as guilty as you can be when you steal one of the most broken cards in the format from your opponent in the Top 8 of the Pro Tour. Oiso tried his best to fight back, but cast the rest of his spells leaning back in his chair, with his shoulders hunched over. He knew he was about to be down two games to none, and had the monumental task of winning the next three in a row to advance.

Jonsson mulliganed down to six. He opened with Welding Jar and Seat of the Synod, and played Vedalken Engineer on turn two. On end step, Oiso cast Raise the Alarm, and then attacked for two on his attack before playing Skyhunter Cub. Despite having a fast, affinity-friendly draw, the most Jonsson could do on turn three was to play Thoughtcast. Oiso sent his team in for four, and added Tel-Jilad Exile to his side. Jonsson summoned Spire Golem, which didn't do much to stop Oiso thanks to Leonin Bola. Jonsson played a Nim Shrieker, and was clearly behind in tempo and unlikely to recover. The Golem was tapped on end step, and Oiso used a Viridian Longbow to kill the Shrieker, clearing the path for another attack. A few turns later, Oiso pushed through easily for the rest.

Once again, Jonsson mulliganed his opening hand. He started with a Chromatic Sphere and cracked it on turn two to play an Engineer and Oiso played Scythe of the Wretched. This draw wasn't much better than the last where speed was concerned, as Jonsson just attacked with the Engineer, and played Slagwurm Armor. Oiso brought out Elf Replica, and Jonsson simply put the Armor on his Engineer and passed the turn. Oiso put the Scythe on his Replica, and said go. Jonsson drew, played a land and had nothing else, and was obviously irritated by his change in fortunes from the first two games, when a trip to the Semifinals seemed inevitable. Oiso's Replica got through for damage, and he added Leonin-Den Guard and a Soldier Replica to his side. Murderous Spoils shifted things considerably, killing the Replica and giving Jonsson the Scythe. Oiso played Vulshok Gauntlets and had just enough mana left to equip the Den-Guard, but it couldn't get past the Engineer on this turn.

Jonsson summoned Neurok Spy, and gave it the Scythe. Oiso had an Arrest waiting to deal with the threat, and rather than using Soldier Replica to kill the blocking Engineer, decided to play Arcbound Stinger. Jonsson played Nim Shrieker, and Oiso put the Gauntlets on his Stinger. The Shrieker jumped in front of it, and with the help of Tooth of Chiss-Goria was able to take it down. Oiso was likely not expecting this, as he then played Pteron Ghost and ended his turn. Meanwhile, Jonsson was starting to make a comeback. He played Spire Golem, and gave it the Scythe. Oiso brought out Clockwork Condor, and Jonsson gave the Armor to the Golem, and switched the Scythe to the Engineer. Skyhunter Cub gave Oiso another flying threat, thanks to the Gauntlets.

At this point the game had slowed down considerably, and each player was looking for a way to break through the stalemate. Eventually, Jonsson decided to send in his Engineer for an attack. It was pumped with the Tooth, and was threatening to steal a creature thanks to the Scythe. After damage went on the stack, the Ghost was sacrificed to keep the Replica on Oiso's side, and Scale of Chiss-Goria kept the Engineer alive. It looked like the Scythe would be able to carry Jonsson through the game, but it would take some time. Jonsson also played Myr Retriever, although the only artifact in his graveyard was Chromatic Sphere, so it wasn't particularly threatening. The Engineer got through for an attack, Jonsson played Cathodion, and handed it the Scythe. On the following turn he gave it the Armor as well, and sent it in for an attack. Oiso didn't block, and took six total thanks to a pump from the Tooth. Sun Droplet made things look a bit better for Jonsson, who was quickly making the idea of attacking even less viable for Oiso. 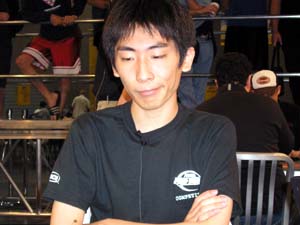 With his life running out, Oiso started to throw creatures in front of the massive Cathodion, using an Arcbound Worker to chump block. Of course, thanks to the Scythe, every chump block would set Oiso that much further behind. To make things even more lopsided, Jonsson played Viridian Longbow, and had all the mana and creatures necessary to end the game despite Oiso's best efforts.

1 Scythe of the Wretched
61 Cards