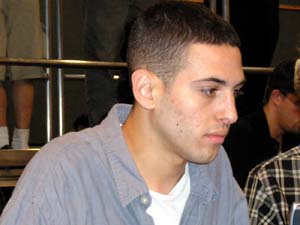 Stark wasn't exactly a big name until recently, but his skills are quite respected in Pro circles. His results are catching up to his reputation however, with two Grand Prix Top 4's in 2003 and most recently a Top 8 at Pro Tour Kobe. If anything's the mark of a great player, it's back-to-back Top 8's.

Stark is pleased with how his Top 8 draft went, saying he'd trade this deck for four of the five he drafted this weekend (excluding an ABSURD affinity deck with five artifact lands, Chromescale Drake, Broodstar, double-Thoughtcast and all the fixin's). He's confident he can win this Pro Tour. With so much removal, Isochron Scepter and Altar of Shadows, Stark plans to rule the board and win with one unanswered creature and his suite of burn spells. The only deck he fears is one with enough removal that it can answer all his creatures.

Unfortunately for him, two-time Euro Champ Nicolai Herzog has just that. A red-black monstrosity stuffed with answers, the unkillable Myr Matrix and Darksteel Gargoyle, and Panoptic Mirror to go nuts with. Herzog is looking to win his second Limited Pro Tour this season, following up on his win at Amsterdam.

Before the match, the two players discussed the very close Player of the Year race. Three of the Top 10 point holders (Stark, Herzog, and Mike Turian) are in this Top 8, so even a win isn't enough to feel safe.

"I follow it pretty closely. I don't even care about the money, I just want to be Player of the Year." - Ben Stark

"I think I need at least a second place to be in a good position. I mean, Kai and Nassif …" - Nicolai Herzog

"Nassif could do well at teams, but he's definitely going to do well at Worlds." - Ben Stark

The players borrowed a die from a nearby Mike Turian ("It's a dollar if you win!"), and Stark won the right to play first. He cycled a Pyrite Spellbomb, then got in with Tel-Jilad Chosen and Talisman of Impulse. Herzog played out three straight swamps.

He bit the bullet and added Slith Predator to the table. Herzog could only shrug and show him the Barter. Stark nodded. He played out his Goblin War Wagon. Herzog tapped five for an Ogre Leadfoot, and they traded in combat. Stark put down a Tel-Jilad Wolf and watched it die to an Electrostatic Bolt. 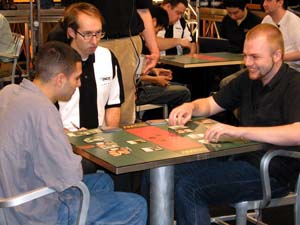 Herzog started some beats of his own with a Vulshok Berserker. Stark forced it to stay home the next turn with a Tel-Jilad exile, but then Herzog played his nightmare card: Darksteel Gargoyle. The only card in Stark's deck that could stop it was Tangle Spider, and against Herzog's removal, even that wouldn't last long. He frowned and played out Altar of Shadows.

Herzog swung for six, then thought hard before adding Leaden Myr and Nim Replica to the table. He turned his men sideways. Stark sighed.

"Is that the German sigh?" - Nicolai Herzog

Stark ate the Myr with his Troll, shot down the Berserker, but still fell to five. He kept up the game, but without Tangle Spider, he had nothing to stop the Gargoyle.

"I can't believe you read me for Barter." - Nicolai Herzog

"Yeah. I probably shouldn't have played the Slith. I just didn't see him doing anything later." - Ben Stark

Stark led with Copper Myr and then a Talisman and Pyrite Spellbomb. Herzog had a Talisman of his own and then paused to think. He gave up his Dross Golem to the Spellbomb. Stark untapped, swung, and played a Wolf. Herzog's five mana gave him a Panoptic Mirror. Stark practically backed away from the table. He hit for three and gave it back to Herzog, hoping for the best.

Herzog stacked the Mirror and tucked Electrostatic Bolt underneath it.

Herzog shocked the Wolf. Stark beat in for one and grit his teeth. The Mirror shot down the Myr and Herzog brought out the Berserker. When Stark didn't find a fifth mana Herzog put Echoing Ruin in his Mirror and busted up the Talisman. The next turn he took down the Great Furnace, leaving Stark at two mana. Worse, he had the Darksteel Gargoyle.

By the time Stark found his way up to four mana and a Tel-Jilad Exile, Herzog Mirror'd up a Terror. Stark packed it up.

"Did you get that Mirror late?" - Ben Stark

"I think, third, I'm not really sure." - Nicolai Herzog

Stark opened with Copper Myr and Tel-Jilad Outrider, but Herzog had Echoing Decay. He replaced it with Wizard Replica, tapping his Myr so he could leave a blue up in his Talisman. Herzog tried a Vulshok Berserker and Stark countered it with the Replica. Herzog showed Panoptic Mirror.

At least he was holding Oxidize. Herzog paused during his upkeep, but then didn't use his Mirror. He played a Nim Replica and passed it back. Stark held back on his Wolf and Leadfoot, letting his Myr worry about the Replica. 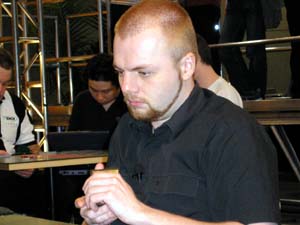 Down came Darksteel Gargoyle. Stark ripped Isochron Scepter and stuck his Oxidize on it to get rid of the Mirror. Herzog returned the favor with Echoing Ruin. Stark had no choice but to bust out his Wolf and Leadfoot, since the Gargoyle was devouring him. Herzog's play of Greater Harvester was slightly better. He smashed, and Stark chumped with the Wolf.

Stark made no play on his next turn, then ambushed the Harvester with Tangle Spider and the Leadfoot. He got the Harvester, but lost both his men thanks to Electrostatic Bolt. That was enough to earn the scoop.