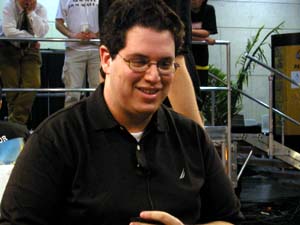 Turian and Mark Herberholz are two of the three Americans in this Top 8 draft. Turian, currently living in Pittsburgh, is one of the veterans of the tour. Herberholz, from Michigan, has earned his stripes in the PTQ ranks and has made the leap to Sunday play relatively quickly.

The two players are friends, and have hung out at various events in the Ohio Valley for years. Herberholz was included on the CMU-TOGIT mailing list for the last Pro Tour (Kobe), and stayed at Turian's house for a few days prior to that event.

Now their relationship takes on a tangible "master-and-apprentice" feel--if Herberholz wants to achieve greatness, he must go through Turian first. Turian, claiming that this is his last Pro event, will show no mercy to Herberholz, regardless of their friendship. Turian wants to go out a winner.

Turian's deck is his trademark specialty: white-red equipment. Unfortunately his equipment is limited to a Specter's Shroud, a Neurok Hoversail, and a Whispersilk Cloak. Although his card quality isn't as high as he'd like it to be, it is still capable of lightning-fast draws.

Herberholz has a decent red-blue deck featuring Lightning Greaves, fliers, and Arc-Slogger. He has Bosh, Iron Golem in his sideboard, deemed too slow for his first-round match against Turian.

Turian won the die roll and had the right draw to exploit that--turn-2 Slith Firewalker. The Slith got up to 3/3, but then Herberholz played a 3-mana Oxidda Golem on his third turn, and protected it with Lightning Greaves. A different Slith--the white Ascndant--came down on Turian's fourth turn, and the CMU'er drew Neurok Hoversail on his next turn, allowing the red Slith to go airborne as well.

Herberholz was holding the ground with a heavily equipped Frogmite, and dropped Fatespinner to try to get Turian to skip the wrong phase.

Turian decided to skip his main phase, drew, then attacked for lethal damage in the air. 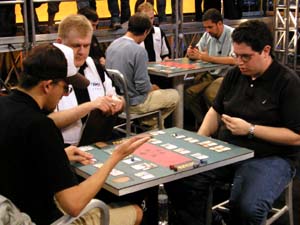 Herberholz made a Hematite Golem, but it wasn't much use against the Transfixer. A turn later, Turian played Vulshok Berserker and attacked with many creatures. Herberholz bounced the Cub with his Spellbomb, but took 7 damage down to 11 from the others.

Mark used his Darksteel Pendant on his upkeep and saw an Arc-Slogger waiting for him. With only four mana untapped at the time, it would have to wait a turn. Herberholz played Oxidda Golem instead.

Turian hit Herberholz for 2 more with his flier, and then the Slogger came down; Herberholz had no mana available to use it right away.

Turian had plans of using it himself, however. At the end of Herberholz's turn, Turian tapped the Stinger with his Transfixer, then utapped and went for the kill.

Transfixer tapped the Frogmite, the Grab the Reins (first mode) stole the Arc-Slogger and gave it haste, shot the Oxidda Golem, and sent the team. Herberholz had no recourse, and dies at the hands of his own Arc-Slogger.

Herberholz kept a land-heavy hand a played a turn-3 Neurok Spy. That's nice and all, but it paled before the Slith Ascendant with Specter's Shroud that was attacking him on turn 4. Turian added a Skyhunter Cub to the table, and Herberholz looked to be reeling. 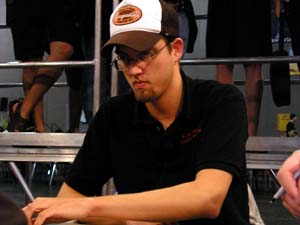 An off-color artifact land let him power out a Somber Hoverguard just in time, but when he threw it in front of the Slith, Turian played Awe Strike to save his guy. Herberholz slumped.

Arc-Slogger came down on the next turn, but Herberholz had to use both of his available activations to kill the Slith, leaving him with just 7 cards left in his library. Turian had an Abunas to hold the ground and a Skyhunter Patrol to reinforce the air, and Herberholz didn't draw any answers.

It was, in every way, a savaging.