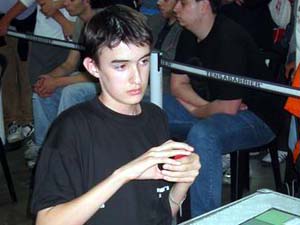 what turned out to be a very surprising top 8, the one Pro Tour veteran, Frank Karsten is playing against the Swiss Leonard Barbou.

Frank seems to have finally found the last bit of oomph he needed to put up top finishes and making a name for himself. The last couple of years he's made a couple of top 16's at Pro Tours and a Grand Prix top 8 here and there but this year he's finally been able to take his game to the next level with this being his third GP top 8 and a tenth place finish at San Diego. Leonard, on the other hand, hasn't enjoyed quite the success Frank has. This is his first opportunity to put himself on the Pro Tour map.

Frank is running the Dutch version of Affinity, sporting 4 Aether Vials and foregoing any 0 casting cost artifacts for more consistency and a better long game. The version has done him well so far as he fought his way through a very artifact unfriendly metagame to a top 8 filled with relatively unknown players. Leonard is the one other Affinity player. He, too, chose to play a rather unconventional version setting up more consistent draws with 4 Serum Visions and 4 Thoughtcast. His sideboard is geared towards beating the mirror and Ironworks, rightfully thinking that the hate isn't enough to beat the Affinity machine.

Leonard won the toss and chose to play. His opening hand consisted of Vault of Whispers, Chromatic Sphere and Serum Visions, but no other land. After a considerable amount of thinking he chose to keep. Frank kept as well.

Leonard led with the Vault and the Sphere while Frank kicked off with his benchmark card, Aether Vial. Leonard drew his second land off of his first draw phase and build up with Plating and Frogmite. Frank could only play a Sphere and refill his hand with Thoughtcast after Vialing out a Disciple of the Vault.

Another land for Leonard easily justified his decision to keep as he, too, refilled his hand cracking the Sphere and casting Serum Visions. The Visions found him a Disciple of his own. He finished his turn attacking for 7 with a Plated Frogmite.

Frank paused on his upkeep and after some thought put a second counter on his Aether Vial. He then played another Disciple and another Vial for what seemed to be a rather unimpressive turn. Leonard kept up the beatings playing out another Frogmite and an Arcbound Worker before attacking with his Frogmite again. What Leonard didn't know was that Frank had a monster hand at this point and when he tapped his Great Furnace to cast Arcbound Worker he gave Frank the green light for a huge turn four.

Frank untapped, charged up his Vials and Vialed out Disciple number three and an Arcbound Ravager. Without any fear of Shrapnel Blast he then simply drained his opponent out from 20.

Leonard once again had a tough decision to make as his opening hand featured Darksteel Citadel, Glimmervoid, Disciple of the Vault, Moriok Rigger, two Detonates and a Somber Hoverguard. He had all the tools but he might not find the mana to cast them in time. Nevertheless, he chose to keep. Frank had an easy hand to keep as it featured Vial and creatures.

Leonard had to get his Citadel in play before being able to start casting stuff so his first two turns only added a Disciple to his side of the board. Frank played two Vials and a Chromatic Sphere. Leonard didn't manage to draw extra lands this game and all he could do was Detonate one of Frank's lands.

Frank didn't have much gas either as he passed his third turn back after Thoughtcasting and didn't Vial out anything when Leonard found his third mana and played Moriok Rigger. He even charged up one of his Vial to three so he could power out Shaman. Frank then cast Cranial Plating and another Thoughtcast.

Another one of Leonard's turns passed without any excitement as the Rigger dealt the first damage of the game and was joined by a Frogmite. Frank finally found the right time to show what he was holding in his 6 card hand as on the next turn he dropped Chromatic Sphere, Arcbound Worker, a Blinkmoth Nexus and three Enforcers. 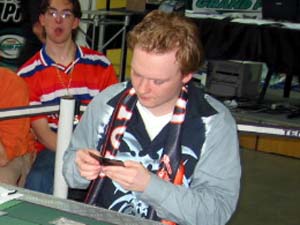 All Leonard could do was drop a Somber Hoverguard and when Frank attacked the next turn he let the three Enforcers through. He realised his mistake right away but couldn't find a block where he wouldn't just lose all his creatures so he just let Frank attach the Plating to one of his Enforcers and took a lot over 20.

Game and match to Frank Karsten