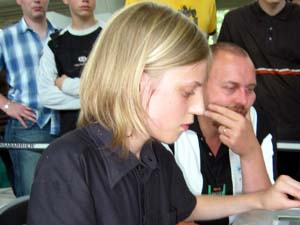 lone Tooth and Nail player against the lone Red-Blue player in the Top 8. In a sea of Green with the two Affinity playing against each other one of the Swiss players faces on a French.

Fagnoni took a mulligan. Bucher was the first to blink with a turn two Sylvan Scrying. On his fourth turn Manuel tried Solemn Simulacrum but The French had Condescend.

Fagnoni dug deep with Thirst of Knowledge discarding two Electrostatic Bolts before playing Darksteel Ingot. The Swiss used Reap and Sow to blow up one of Fagnoni's lands when the French stumbled.

Bertrand still felt safe at four mana but Manuel Bucher launched another Reap and Sow, this time with entwine. Next the little Swiss decided he might as well start attacking.

He played Leonin Abunas and tried Solemn Simulacrum again. Fagnoni had Annul. The Stalking Stones turned into a creature and the French played Darksteel Pendant.

Manuel: "Tooth and Nail with entwine?"
Bertrand: "Ok, you win."

They both kept their hands, although Bertrand seemed anything but happy. On his third turn he played Darksteel Ingot, but he missed his fourth land drop. Bucher fished with a turn four Leonin Abunas but the French had Condescend.

Eternal Witness brought Abunas back, while Fagnoni set up for the long game with Darksteel Pendant. When he found his fourth land he played a backbreaker: Acquire.

Bertrand dragged it along trying to figure out what his opponent had in hand by looking at the cards in his deck. He ended up taking a Solemn Simulacrum. Bucher played his own Simulacrum.

They traded Thorens and Fagnoni played March of the Machines. Sylvan Scrying gave Manuel his second Cloudpost, before he played Abunas. With the second Cloudpost online he tried Mindslaver. Bertrand allowed it.

Then young Swiss tried to activate Mindslaver and Fagnoni pointed to his March of the Machines. Beacon of Destruction took Leonin Abunas away and Echoing Truth bounced the Mindslaver.

The Witness chumped the Pendant, and Bucher used another Witness to fetch back Abunas. Again Fagnoni had the Condescend to try to stop the White creature. But this time he only got a chance to scry, because Manuel Bucher had enough mana for the whole Top 8 at this point.

The Swiss tried the Mindslaver again but this time the French had Annul. But when Manuel tried Oblivion Stone there was no answer. Standing behind his indestructibule artifacts-turned-creatures Bertrand tried desperately to find a way to regain total control of the table. 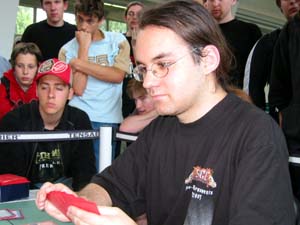 Accross the table Manuel Bucher was having the time of his life. Next he resolved Plated Slagwurm. Now that's something a Blue-Red can't really do much about. Still the French hardly blinked.

Manuel got rid of the March of the Machines and Bertrand's defense plan fell like a house of... well, cards. A Tooth and Nail with entwine convinced Bertrand Fagnoni he might as well concede before the White Keeper started recurring the Mindslaver.