It was Paul Cheon's first European Grand Prix, and he made sure to leave his mark among the European crowd that lined the feature match area. Both players had come into this Top 8 with control decks, Besso with straight-up mono-blue Pickles, and Paul Cheon with U/W Control, also including the Pickles combo.

The Italian was clearly heavy with countermagic, and pressed Cheon into aggressive mode. Two of his morphs drew blood and took David Besso to single digits. On 8 life, David tapped out at the end of Cheon's turn to crank a Worker token out of his Factory. Cheon flipped Brine Elemental face up, keeping all of David's lands frozen in place. Of course, the second morph was the second half of the Pickles combo, Vesuvan Shapeshifter. Bang, gg.

"I just don't know what to take out," said Cheon, while he discussed his options in his head. "It's supposed to be a race match-up," David helped out. In the end, the players decided to sideboard like this:

David took out his 4 Rune Snags and 2 Brine Elementals to put 4 Phyrexian Ironfoot and 2 Aeon Chronicler into his deck.

David suspended Ancestral Visions off his first Island. "We know who's winning this game," replied Cheon. But a couple of turns later, after the Visions fired off, it was the American who tried his hand at a win condition, playing Venser, Shaper Savant. David rejected the Venser with Cryptic Command. Naturally, the Venser had been bait, so Cheon could play Jace Beleren unhindered. But that plan fell through when David cracked his storage land to pay for Faerie Trickery.

Phyrexian Ironfoot snowed in for David. It must have felt nice and cosy under the Oblivion Ring Cheon gave to the Ironfoot as a present. The American had less mana, but used it more efficiently, suspending Ancestral Visions. However, having lots of mana is good when you are fighting a counterwar over a morph, like these two did. David managed to make the mystery creature stick with the help of Cryptic Command, but it tapped him out. 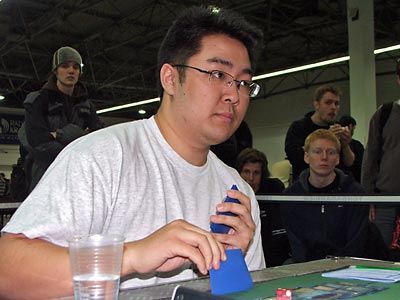 Cheon used the opening to make a mystery monster himself. His five to David's nine lands made all the difference when the Italian played Teferi. Cheon couldn't stop the Mage of Zhalfir other than killing it in combat. With his own Vesuvan Shapeshifter gone, David saw the way clear to do what Cheon did in Game 1: Lock his opponent out with the Pickles combo.

Ah, the witty banter. However, banter would carry neither player through to the semifinal – playing Magic would. But the mirror match between two control decks who both include the Pickles combo is a waiting game – waiting for whoever blinks first. When Cheon moved to put another counter on his storage land, David attempted Cryptic Command to bounce the land and draw a card. Cheon had Faerie Trickery.

So did David, but he used Faerie Trickery to fail Cheon's attempt at Venser, Shaper Savant. The suspense of what Cheon called "a strange match" nearly strangled the players, as David placed Aeon Chronicler with two counters in the removed-from-game zone. Cheon had Ancestral Vision to suspend, played Teferi and hoped to lock away the Chronicler.

Cryptic Command saved the Chronicler, bouncing Teferi. Cheon decided not to try for the Mage again, instead making a mystery creature. Clearly, it had to be a Vesuvan Shapeshifter. Chronicler hit the American for the full seven, down to 11. At the end of his own turn, David flinched and added Teferi to his board, for no apparent reason other than to have it. Cheon put Aeon Chronicler under the charm of an Oblivion Ring. 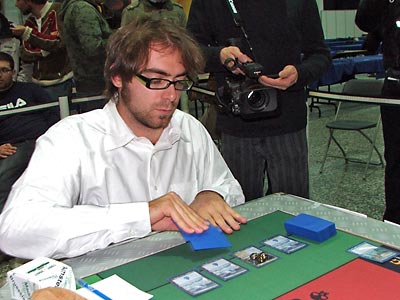 Teferi traded with the morph, the obvious Shapeshifter. While Cheon successfully suspended a second Ancient Visions, his attempt at another morph met one of those really nifty Italian Legends Remove Souls. David seemingly had an unending stream of countermagic, first stopping Cheon's Teferi with Faerie Trickery and then using another Faerie Trickery against Ancestral Visions.

Rune Snag hit Cheon's second Teferi, he paid. Another Snag hit, he paid. A third Rune Snag hit. Cheon removed a bunch of counters from his storage land to pay for Cryptic Command, and all over sudden, Teferi was in play, Cheon's Ancestral Visions resolved and Jace Beleren went unhindered.

"Please?" David pleaded when he placed Sower of Temptation on the stack. Cheon refused to hear the plea and tried to counter the Sower with Faerie Trickery. Have you ever read the Sower's typeline? Cheon had forgotten that Sower is, in fact, a Faerie. But little did it matter, as the American had Cryptic Command to help him out, countered the Faerie Sower and gave him the win!