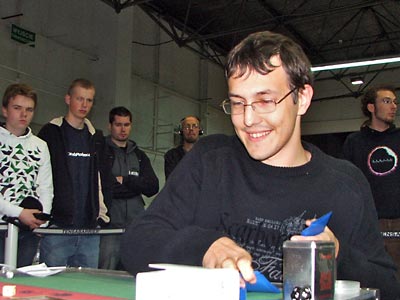 As humble as ever.

While it's getting colder and colder outside here in Krakow, tension rises inside. We're off to quarterfinals with Austria's Armin Birner facing Slovac Matej Zatlkaj. Matej: "Write in the coverage that I'm not a good player, even though I played some Pro Tours!"

As both players inspect each other's decklists, Armin claims to have the good matchup here with his R/G rampish monster deck. Matej – playing the very solid U/B Mannequin – is still happy, because he doesn't have to play against Pickles: "Too hard, too frustrating, too... well, psychic."

Krakow is Birner's second constructed Grand Prix and his third top 8 all over. Though, he never reached the semifinals before. Let's see if he can do it.

Winning the die roll is a good start. Birner chooses to play, keeping his opening seven, as does Matej. The Austrian starts to develop his mana right from turn one, suspending Search for Tomorrow and a Treetop Village on turn two. Matej suspends Riftwing Cloudskate before Armin get's to fetch a Forest and beats with his Village. A turn three Shadowmage Infiltrator surprisingly survives and gets do draw one card before dying to Incinerate. Matej casts Phyrexian Ironfoot, which does little versus Armin's fresh Wall of Roots – but shines at blocking Treetop Village.

Matej: "Ouch." Cloudskate dies. And so does the giant green elemental – of course Matej has Shriekmaw. Everybody's favorite Ewok beats Armin down to 14 with Matej being at 12 life. Shortly after, Armin casts his next quality guy with Siege-Gang Commander, leaving 1R open. But Matej just kills him with Profane Command (X being 2 – why not 3 to reanimate Mr. Finkel?).

Armin just draws and passes, which means a lot for Matej, facing a deck with flashy Hellkites and Cloudthreshers. As the Slovac attacks, Birner goes to the think thank for a while before – we all saw it coming – casting Bogardan Hellkite, which deals 4 damage to Ironfoot. He didn't want to block it, clearly seeing Matej's Mouth of Ronom. In his second main phase, Matej casts another artifact beatdown stopper and Makeshift Mannequin, targeting Shriekmaw, targeting Hellkite.

Here we go again: Lucky enough, Armin has a second Hellkite, which burns away Ironfoot AND Shriekmaw due to the letter's Mannequin-Counter. The way is clear for Birner's little Goblin armada, dropping Matej to 8 life.

Zatlkaj drops Mulldrifter, Mind Stone and a land, keeping one card in his hand. Hellkite and Goblins beat for 8 damage, and Matej goes down to 3 life, never drawing an answer.

Matinj's plan is more straight forward: 4 Ironfoot and 4 Epochrasites get replaced by 4 Thoughtseizes and 4 Damnations, and we're off to Game 2.

Boths players keep their hands and both players got some action on turn two: Mind Stone for Matej, Wall of Roots for Armin. The green mana source dies to Shriekmaw the turn after – Birner just casts another. And Matej kills it via Makeshift Mannequin. A hardcast Search for Tomorrow finds a desperately needed Mountain for Birner, having access to red only over Karplusan Forests and Grove of the Burnwillows.

The reanimated Shriekmaw beats Birner to 15, who just suspends miser's Detritivore. In comes Venser, Shaper Savant, enforcing the Slovacian beatdown. Shriekmaw, Venser and double Faerie Conclave drop the Austrian to a low 6 life. Siege-Gang Commander and Disintegrate for 0 at the Mannequin'd Shriekmaw look good in this situation. Matej continues to beat with Faerie Conclave (Detritivore ate one, though) and casts Shadowmage Infiltrator.

After that, Detritivore eats the second Conclave and joins the party, being a mediocre 2/2 beater. Armin thinks about it for a long time, the sacrifices all three goblin tokens to kill Finkel and Venser and to swing with a now gang-less Commander. That drops Matej to 10 life. A Profane Command for 4 ends the second game in an appropriate fashion.

The Slovac changes his sideboarding for Game 3 by removing 2 Profane Command and adding 2 Draining Whelk, which Armin extpected repeatedly ("Whelk? Whelk? Got a Whelk?") in Game 2. 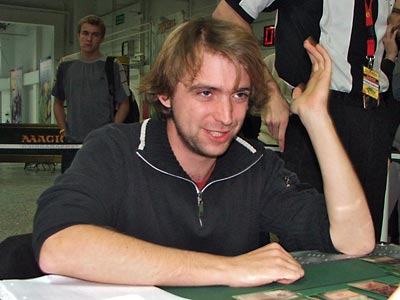 Armin choses to play and chooses the trip to Paris once before suspending Search for Tomorrow on turn one. Matej has a Thoughtseize on his first turn, seeing three lands and Cloudthresher: "That was easy." Armin just drops Treetop Village, adds Wall of Roots on his next turn and starts some beatdown with walking lands. The Slovac evokes Shriekmaw to kill Wall, going to ten after Armin's next attack with Treetop Village. Tarmogoyf meets Mannequin (targeting Maw), but Incinerate takes care of the blocker. Due to pain from Underground River, Matej drops to 6.

Matej: Draw, go. Armin: Draw, go. No attack with Village, fearing another Mannequin. Venser temporarily neutralized the feared land, Armin just replays it and adds Fertile Ground to his board.

Passing with 8 mana open and one hand card, all alarm bells should ring for the Slovac. And of course: at the end of of Matej's next turn, beloved Hellkite shows up, killing Venser and causing some damage on Mr. Zatlkaj's notepad, dropping him to 3. Treetop Village and Hellkite swing for the win – but wait: Makeshift Mannequin (causing 1 damage due to Underground River still being the only black source) reanimates Shriekmaw, which kills Kite and blocks Village – Matej drops to 1 life.

Armin passes the turn. Matej hardcasts Mulldrifter and passes, tapped out. Empty-handed, Armin has to draw business now. So, does anybody know Craig Jones? Incinerate from the top kicks Armin Birner to the semifinals of Grand Prix Krakow. The Professor would've been proud, being the grandmaster in ripping burn spells from the top and for the win. Good games.