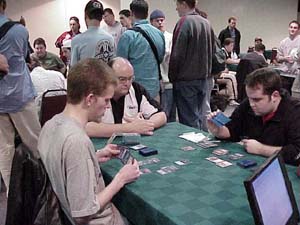 In a match featuring two Pro Tour veterans, Michigan native Aaron Breider, who can often be found playing Magic with Eric Taylor and former room mate Pat Chapin, squared off with Brock Parker, who led the tournament after day 1 with an 8-0 record. Parker, a resident of Maryland who most frequently plays with Matt Linde and Billy Jensen, is a veteran of over a dozen Pro Tours, his best being PTLA 2000, where he finished 10th. After losing the die roll, Aaron, who hasn't mulliganed all weekend due to a very aggressive approach towards keeping to seven card hands when possible, came out fast with a second turn Dream Thrush. Brock, also playing Swamps, Plains and Islands, played a Samite Archer in an attempt to kill it, but Aaron was ready with Exotic Curse. Brock then came back with another solid creature, Razorfoot Griffon, but Breider had another problem for the Maryland native: a Silver Drake that gated the Thrush.

Without an answer to the 3/3 flier in hand, Brock decided to cast Probe, paying the kicker cost. Aaron sat ready to discard as Brock mulled over his decision. Finally, Parker discards two lands and relinquished the turn, with Aaron discarding a land and Shoreline Raider. After attacking with the Drake, bringing Brock to 15, Breider cast a Vodalian Zombie in what was, up to this point, a furiously paced match.

At this point, Brock slowed his pace a bit, with a number of difficult decisions to make. Asking for the second turn how many cards the Michigan native had in hand, Brock finally cast a Stormscape Apprentice, after which he cast his own Silver Drake, returning the 1/1. On his turn, Aaron Repulsed Parker's Drake and attacked for five, leaving the score at 18-11 in Breider's favor.

Brock attacked for the second time with his Griffon taking the score to 16-11 before casting the Silver Drake again, after which he Recoiled Breider's Drake. Aaron then made a curious play, casting Dream Thrush instead of the Drake, leaving just two mana untapped. Brock jumped on this opportunity, attacking with the Drake and casting the Apprentice and one of his bombs, Ertai, the Corrupted.

Fortunately for Aaron, he had a bomb of his own. While still suffering from a mana shortage, he was able to cast a bomb of his own before Ertai became active: Stormscape Master, both of who's abilities his deck is capable of activating. Brock attacked with Ertai and the Drake, bringing Aaron to 7, at which point he cast Bog Down with the kicker, emptying Aaron's hand.

With Breider using the Master's black ability, the score stood 9-8 in his favor, but Brock had clear board advantage. Brock got an Obsidian Acolyte into play, effectively nullifying the Vodalian Zombie and attacked for 7, taking Aaron to just two life. Aaron declared his attack phase to see if the Apprentice would tap any of his creatures, but as the Acolyte protected it, Brock decided not to activate it, and Aaron relinquished the turn. With the Apprentice tapping the Master, untapping and tapping the Thrush, the path was cleared for Brock's large creatures to swarm on through for the win, two turns before Master would have killed him

Game two started just as quickly as game 1 went, with Breider casting Opt on his first turn. Aaron then cast a second turn Vodalian Zombie before Brock answered with an unkicked Prison Barricade. Aaron played a third land without casting a spell before Brock cast an unkicked Urborg Emissary with his blue mana absent. Aaron, sensing the color problems, decided to get his strongest cards into play, casting Stormscape Master, but Brock was ready, playing his first Island and casting Benalish Heralds, which should be very strong in the match up. 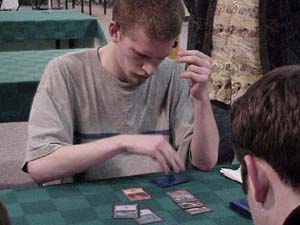 Aaron the surprised Parker by playing a fourth colored land: Mountain, but, content to start using his Master, decided to only cast Stormscape Familiar. Brock, deciding the key to this game lay in his ability to generate card advantage, attacked with the Heralds for two and cast Probe with the kicker, making Aaron discard Power Armor (his first pick overall) and a land, leaving only Exotic Curse in his hand.

Still holding five cards to Breider's two (the Curse and an Island), Brock attacked for two with the Heralds and cast Stormscape Apprentice, Obsidian Acolyte and Disciple of Kangee, leaving just one card in hand. Aaron cast Exotic Curse on Disciple of Kangee and attacked for 1, putting the score at 20-14 in his favor, but things weren't looking good, with Brock, casting a Dream Thrush to add to his obvious board advantage.

With the Master draining for two each turn, Brock decided to make an attempt to stop it before it was too late. Electing to not attack with the Heralds, he held it back in order to start drawing extra cards in the hope that he would find a way to dispose of it before Breider had drawn his white mana. Brock drew a card, untapped and drew again, but all he was able to find was a Samite Archer, whose damage prevention ability is no help against the Master. With the score now 24-10, Aaron attack with the Familiar, which traded with the Dream Thrush, a possible blocking mistake on Brock's part as the Thrush would have died to the Archer on his next turn and the one point wouldn't make a difference as far as the Master was concerned.

Brock's next move was to cast Bog Down with the kicker, but Aaron was waiting with some sideboard tech. Having seen the Probe in game 1, Aaron cast his Ertai's Trickery, saving the contents of his hand. Brock attacked with the Heralds and Acolyte, before shooting Breider with the Archer at the end of Aaron's turn, leaving the score at 23-8.

Once again, Brock activated the Heralds on his own turn. Realizing that his life count was a little thin, he desperately wanted to find a way to deal with the Master. Finally drawing Spite/Malice, Brock tried to kill the Master in response to its activation, but Aaron was ready, casting Confound and drawing a card.

On Aaron's turn, he cast an Urborg Shambler as the Archer reduced him to 22. With the Master reducing Brock to 6 life now, he cast a Sunscape Familiar followed by a Silver Drake, which gated the Prison Barricade. With the Master taking the score to 22-4, Aaron relinquished his turn, giving Brock a draw step and an activation of the Heralds to find what he needed to deal with the Master. After Brock cast a Shoreline Raider, Aaron drained him to 2, but Brock had a temporary reprieve recoiling the Master. Aaron recast it and said go as Brock tapped the Urborg Shambler, and after drawing his two cards for the turn, Brock conceded, one turn away from finishing off the match

Game three of this slugfest started with both players keeping their opening hands. After a 1st turn Apprentice from Parker, he played a second Island, suggesting there might be color problems. Aaron cast Vodalian Zombie and relinquished the turn, but Bob's color problems came to a halt with a third Island and Dream Thrush. Aaron cast a Thrush of his own before Brock played an Ancient Spring and cast Silver Drake, gating the Apprentice.

Aaron cast Opt at the end of Brock's turn and chose to pass on a Vodalian Serpent, instead getting a Plains. Putting it into play on his turn, Aaron cast Agonizing Demise on the Drake and attacked for three, taking the score to 19-15 in his favor. Brock then made an interesting decision. Relying even more on the Thrush, he sacrificed the Spring and Cast Ertai, then cast a Stormscape Apprentice with his fourth Island and gave up his turn.

Aaron's turn saw him make an interesting attack. With Ertai staring it in the face, the Vodalian Zombie charged in for two points of damage. Brock took it, going to thirteen, and Aaron cast a Volcano Imp. What Brock didn't know is that with the Thrush active, Aaron could have killed Ertai with the Magma Burst in his hand if Ertai had blocked.

On Brock's turn, he charged in for three with 'the Corrupted, taking the score to 15-13 in Aaron's favor. After Brock finished his turn with a Sunscape Familiar, Breider cast Magma Burst to try and kill the Thrush and the Familiar, helping Brock's mana problems worse. Brock was ready with a Confound in hand, but Breider, sensing this, was ready himself, Prohibiting the Confound. With no white mana available and his life total getting low, Brock had to stay back on defense, with Aaron's flyers still getting through next turn for three. 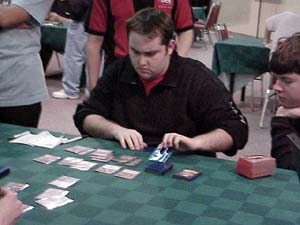 Then, Brock did a nice piece of top-decking. Attack with Ertai to take the score to 11-6, Brock played his freshly drawn Plains and cast Angel of Mercy, gumming up the air and increasing his life total by 50%. Without a way of dealing with the Angel in hand, Breider cast Opt, but failed to find an answer. With the ground blocked up by Ertai and the air by the Angel, Ertai's special ability became crucial. Attacking with the Angel to move the score to 9-8 in his favor, Brock gave up his turn before Aaron tried to Exotic Curse the Angel. Brock responded by tapping the Imp and sacrificing the Apprentice before Aaron attacked with everything, moving the score to 8-5 Breider (note: casting curse before combat costs Breider 2 points).

On Brock's turn, having no choice but to race, Ertai attacked, moving the score to 5-5. With nothing to cast, Brock gave up his turn, but Aaron wasn't so quick. Drawing the powerful Cavern Harpy, Breider put it into play. On Brock's turn, Ertai attacked taking his opponent to two, but on Aaron's he attacked with three creatures, leaving back two Thrushes, leaving the score at 3-2 in Brock's favor.

Back and forth, the game seemed to be resting on a very fine balance. Aaron cast an unkicked Hypnotic Cloud, forcing Brock to discard Bog Down, but on the following turn, Parker had a Recoil, which would seemingly clear the path to victory. Unfortunately, Breider had the answer, a Confound, meaning only Ertai could attack, with the Thrush who moments earlier was to be recoiled, instead surviving to chump block.

Unfortunately for Aaron, his time eventually ran out. Needing to draw a business card, Aaron drew for the Confound and then for his turn, but found nothing. Giving Brock his turn, the more experienced Parker gave both Angel of Mercy and Ertai protection from Black, attacking. With only the Dream Thrush available as a non-black blocker, Breider looked at the table, looked at his cards, shook his head and extended his hand to end a very close match