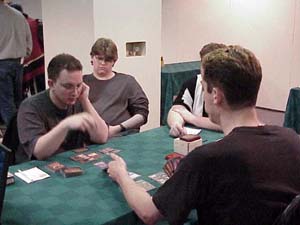 Once described as one of the Game's rising stars, Matt Vienneau has done his darnedest to prove that statement inaccurate. His career as a professional Magic player is littered with costly play errors, even in the finals of Grand Prix Dallas, which he eventually won. Despite all that infamy, he has posted a series of impressive finishes.

His Top 8 draft seemed to meander, but fortunately for him it never strayed from good cards. He started with Repulse and Recoil, but then went into red for Shivan Emissary. He ended up with an excellent deck with many expensive spells, notably two Plague Spores and two Soul Burns.

His opponent is Adam Prokopin, best known for his Top 8 finish at the JSS. He drafted a much narrower Red/Black deck, filled with efficient red creatures and enhancers. His lower curve hopes to outrace Vienneau's expensive spells.

Without black mana for his first three turns, Prokopin couldn't generate any early beats. He had Zap to remove Vienneau's Nightscape Apprentice, but let him get to five mana unharmed. Along the way, Vienneau had mustered a Shivan Zombie, and swung for two before tapping out for Thunderscape Battlemage with the black kicker. Prokopin discarded Mountain and Sinister Strength.

Prokopin untapped and looked hard at his board of four Mountains before deciding to cast Magma Burst with kicker, taking out Vienneau's team. Vienneau didn't play any more monsters on his next turn, but Prokopin couldn't capitalize without a Swamp.

Vienneau had a full hand, and tried to wait on his removal, but Prokopin's draw wasn't co-operating. Eventually he gave up on that plan and played an unkicked Stormscape Battlemage. Prokopin finally drew a creature, a Viashino Grappler, and put it into play. Vienneau made him pay with Plague Spores, knocking him back down to two Mountains.

At long last Prokopin peeled a Swamp. He played out Nightscape Familiar, hoping to stall the ground until he could play out his best creatures. Vienneau Recoiled it, keeping him off-pace. Prokopin discarded Maniacal Rage. He untapped and replayed the Familiar.

Vienneau swung with his Battlemage and summoned a Firescreamer. Prokopin gated in a Lava Zombie and replayed his Familiar, tapping out. Vienneau Repulsed the Zombie and sent for five.

With only five mana, Prokopin was hard pressed to deal with Vienneau's monsters. He made a Blazing Specter and thought hard before holding back. Vienneau attacked again, and the Specter traded with Firescreamer. Prokopin summoned the Lava Zombie a second time, and recast his Familiar. These efforts to stabilize the ground came to naught on the next turn, when Vienneau aimed Soul Burn at his head.

Prokopin's draw in Game 2 was much more aggressive. While Vienneau played out Nightscape Apprentice and Shivan Zombie, he was making a Rogue Kavu and enchanting it with Maniacal Rage. The beast swung, and Vienneau decided to accept the two-for-two, double-blocking to kill it. 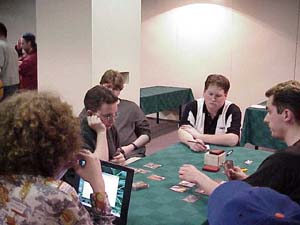 Prokopin followed up with a Viashino Grappler, but Vienneau was ready. He Recoiled it at the end of Prokopin's turn, then removed it with Shivan Emissary when it was replayed. He added a kicked Duskwalker to his team. Prokopin Annihilated the Emissary at end of turn, digging for threats.

He took a hit from the Duskwalker, then drew into Ancient Kavu, which let him gate in his Lava Zombie. Vienneau made one of his own. Prokopin attacked, expecting to trade, but Vienneau had Rushing River to save his Zombie.

Prokopin turned his threat dial up to eleven, replaying his Ancient Kavu and adding a Vicious one as well. Unfortunately for him, Vienneau's removal ran deep. His Stormscape Battlemage axed the Ancient Kavu. Prokopin held it back for a turn, which gave Vienneau time to Soul Burn it.

Vienneau's hits kept coming. He had Plague Spores for a Grappler and another Soul Burn for a kicked Duskwalker. However, he didn't have an immediate answer to Prokopin's Caldera Kavu. He tried to use an unkicked Duskwalker to gate in his Lava Zombie, but was foiled by Prokopin's Zap.

Prokopin added a Rogue Kavu to his side. Vienneau matched it with Firescreamer. Prokopin wiped his board with a kicked Magma Burst, untapped, and sent for four. He also cast Nightscape Familiar. 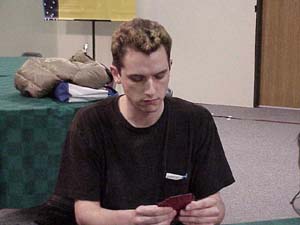 Now Vienneau was behind. He made a Phyrexian Bloodstock, but couldn't block the Caldera Kavu because Prokopin had gobs of mana. He gated in a Lava Zombie, and started taking hits from Rogue Kavu instead. He recast his Bloodstock and took another three, falling to eight.

Prokopin's hand was empty, all his lands were on table to fuel his Caldera Kavu. Vienneau drew Probe and cast it without kicker. He dropped two lands, then Recoiled the Caldera Kavu, sending it to the graveyard. He attacked, knocking Prokopin to two and cast an unkicked Thunderscape Battlemage.

Prokopin recast his Kavu and held back, trying to avoid death. Vienneau's Plague Spores cleared a path for the final two damage.