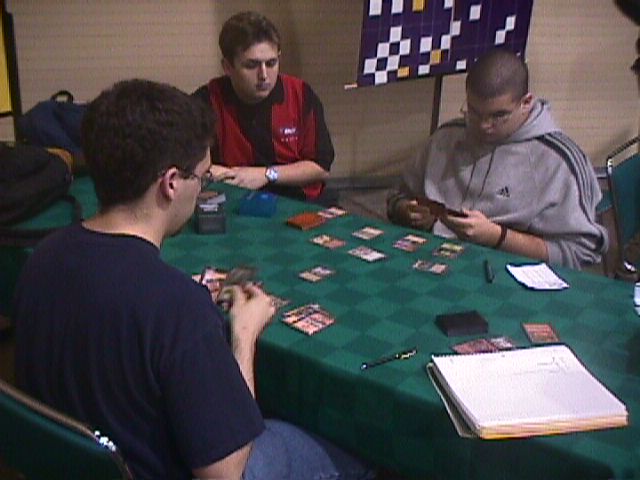 Both players sat down to shuffle each other's deck. Andrew questioned Alex, "Why'd you stop sucking? This would be a lot easier if you still sucked." Alex answered that he never sucked, and Andrew replied "Everyone sucked at one point, even I sucked once."

Before the match began formally, Thomas Pannell gave both competitors special rules for their top 8 match. "You have 90 minutes to complete this match. If a game takes longer than 90 minutes, finish that game. Whoever is up in games, wins", he instructed. Andrew, having an extraordinarily fast deck, asked "Does that mean we play as many games as possible?", to which Thomas replied "No, you still just play two out of three." 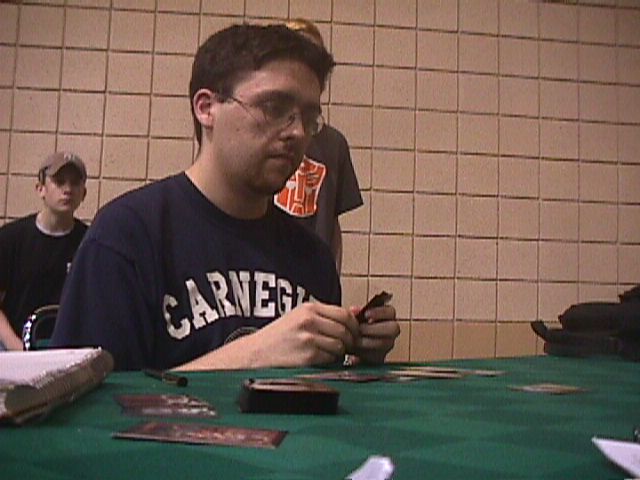 Andrew JohnsonAndrew ends up deciding to play first, but was forced to mulligan a one land hand. His replacement hand contained five lands and a Leaf Dancer as his sole spell. He chose to keep it, and drew a Mad Dog on his first draw of the game. He attacked with the Hound turn 3, and then summoned the aforementioned Dancer. It was quickly Flame Bursted, and Alex cast a Pilgrim of Justice to halt Andrew's hound. While the Dog would not die, it could not break through for more damage.

Andrew cast a second Leaf Dancer, and Alex cast a Wild Mongrel, followed by a Pardic Firecat. On the 6th turn of the game, AJ cast one of his several Reckless Charges on the unblockable creature, and flashed it back, bringing Alex down to 8 life. Meanwhile, Alex had a Moment's Peace in his hand, and safely counterattacked, knowing he had both the flashback Fog and Pilgrim to protect him from further damage. When Andrew failed to draw any further spells, Alex swarmed in with his multiple creatures for the win.

Andrew chose to play, and kept his hand. Alex made the decision to mulligan, sporting an initial draw of two forests, and multiple 5 casting cost creatures. He kept his 6 cards, and had the first play of the game with a turn 1 Diligent Farmhand. It got to swing twice (including running by a turn three Ember Beast) before Andrew summoned his second creature, a Springing Tiger. This shifted the game in Andrew's favor, and even more so when he Reckless Charged the Tiger, and then summoned two squirrels into play with a Chatter. 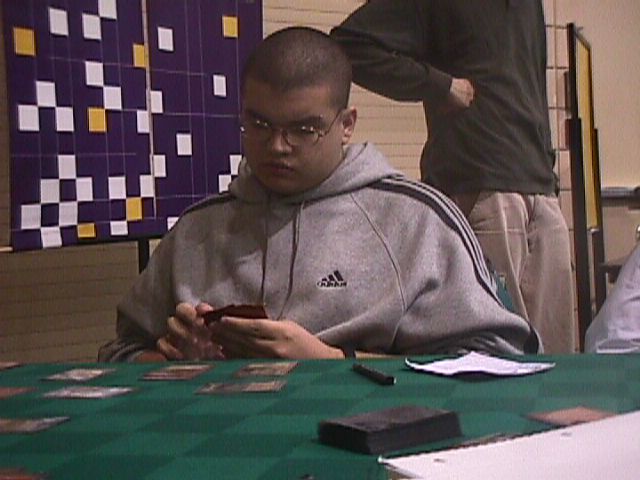 Alex Borteh Alex decided that a 6/3 creature with haste should not be the best creature on the board next turn, so he brought a Gorilla Titan into play, as an 8/8. It really wanted a banana THAT big. This humongous monkey held back Andrew's entire team, which was joined by a Chainflinger the next turn. Realizing that the Titan would be a lot less scary once the tim killed him Farmhand, Alex swung with the monster, dealing eight damage to Andrew and bringing the life totals into his favor, 11 to 10.

Andrew drew his card, and decided to Chainfling the Farmhand. Alex pondered the size of his Titan for a bit, and decided to cast Muscle Burst, keeping his 1/1 alive. This also discouraged Andrew from attacking, so he instead brought a second Tiger into play. At the end of Andrew's turn, Alex sacrificed his creature to recruit a land, and then cast a Luminous Guardian on his own turn, after swinging with the now-smaller ape.

Andrew drew his card, which was a Muscle Burst. Although Alex had three untapped lands (a Forest, a Mountain and a Plains), Andrew decided that it was now or never time. He flashbacked his Charge on a squirrel, and brought his entire team into the red zone. Borteh intercepted a pair of the creatures, but the Muscle Burst (powered up by the Farmhand and second Burst on Alex's graveyard) provided enough damage to win the game, as Alex did not have any answers in his hand.

Alex chose to play, and Andrew mulliganed once before keeping his hand. The entire game was over in a span of five turns. Beginning on turn 3, Alex summoned a Barbarian Lunatic. Andrew Firebolted it on his turn. On turn 4, Alex summoned a second Lunatic, answered by a Springing Tiger. The Lunatic swung on turn 5, bringing Andrew to 18. Unfortunately, Alex was stuck with only one Forest and two Mountains in play, and tried to summon a Diligent Farmhand into play in order to recruit another land. Andrew had the fifth land to flashback his Bolt, and killed the Farmhand on his turn. He then attacked with his Tiger bringing the life totals to 18-17 in his favor.

On turn 6, Alex swung with his Lunatic, bringing Andrew to 16. Not to be outdone, Andrew played his 6th land and double Reckless Charged his Tiger, bringing Alex down to 8. Alex drew his fourth land and cast Acceptable Losses on the Tiger, killing it and discarding Muscle Burst in the progress. He then attacked with his Lunatic, trying to make up the life deficit. The game was not to be his to win, though. Andrew showed the power of Reckless Charge the next turn, casting a Krosan Avenger and enhancing it with his 2nd Charge (flashbacked) to deal a total of 9 damage, killing Alex and winning the game.