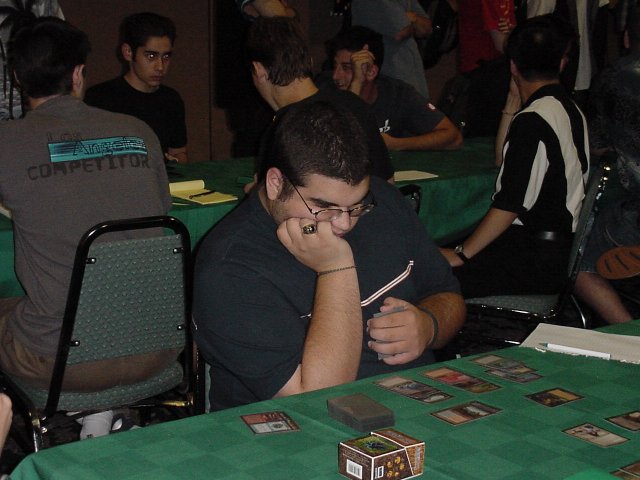 This matchup features 2 new additions to the Pro Tour circuit:

Danny Mandel, a member of team Your Move Games, who finished 12th in PT Los Angeles in 2000. Danny is playing a G/W/U Counter-Hippo deck.

Alex Borteh, who is just coming off of 2 great finishes, top 8 at US Nationals, followed by 2nd at Worlds. Alex is playing a B/R/U control deck with its only creatures being Pyre Zombie and Nightscape Familiar. He has nicknamed his deck Wavy in honor of his friend who designed it.

This matchup was very interesting as it pits two strong control decks against each other, in a quest to see which one is stronger. Danny's deck is more aggressive, with several threats that can just win if they hit the table. Alex's deck has time on its side, as he has Urza's Rage, a card that Danny simply cannot stop. Alex can sit back and wait to see what Danny does.

In classic control versus control games, the winner was often the person who drew the most lands, as both players would be afraid to cast spells since they would not be able to have mana open for countermagic on the opponents land. Turn 12, with each player having dropped a land every turn, the differences betweens today's magic and yesterday's became apparent. Danny, faced with the prospect of Alex finding 2 Urza's Rages, decided it was time to start casting things. Danny's arsenal included a Sunscape Familiar and a Meddling Mage set to Undermine against Alex's Nightscape Familiar. The spells started flying, and when the smoke cleared, the Meddling Mage lay dead, and Danny took three damage from an Undermine. However, while Alex has won the countermagic battle, he has lost the war as he tapped out. Danny played a second Phelddagrif. On his turn, Alex put down a Yawgmoth's Agenda, but the one card per turn restriction proved fatal as a Sabertooth Nishoba was forced through and Alex had too many problems to solve in very few turns, and Danny quickly took game 1. 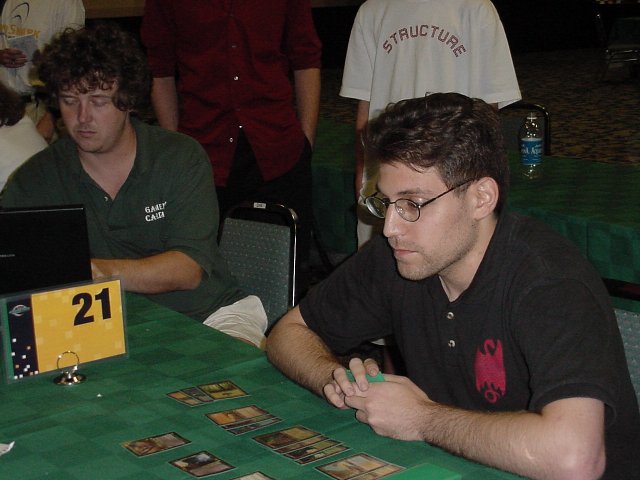 In game two the tables turned. Danny kept putting down a little offense, while Alex kept managing to come up with answers for most of them, slowly taking damage. Eventually Yawgmoth's Agenda came down again, and it looked really bleak as there were about 15 spells for Alex to choose from. Danny used Fact or Fiction, which netted him a lone Meddling Mage to try to fight the Agenda with. He untapped, drew a card, and looked stunned at the card he had drawn. With Crimson Acolyte already on the board, he forced in the Meddling Mage he recieved from the Fact or Fiction, naming Void, one of the two cards in Alex's graveyard that would crush him if played. He then cast the Meddling Mage he just drew to name Spite/Malice and protect the first Mage from what looked like certain death. It started to look grim for Alex, but he put all 3 Nightscape Familiars into play from his graveyard and stabalized a 5. Danny's life was at 27, but slowly the damage spells started to rain in, with a Prophetic Bolt and 2 Urza's Rages getting Danny down to 3. Danny finally attacked in desperation, and Alex spent a few minutes torturing Danny with blocks that would obviously have lost him the game, before finally putting out one of the many, many obvious blocks that would allow him to win. He dropped to 1 life, but finished Danny on his next turn.

Game 3 started, and Danny looked at his opening hand and let out a laugh. He promised Alex that it was not a great draw, just funny. By turn 7, it was a little obvious what he was laughing about as he has a Crimson Acolyte and 3 Mystic Snakes on the board. With an offensive set of small creatures unlike anything seen before in the match, Danny went for the throat by repulsing Alex's Nightscape Familiar and the putting down Meddling Mage to keep it off the table. Alex was forced to Fact or Fiction and came up with the following exceptional list: Obliterate, Void, Void, Fire/Ice and Shivan Reef. Danny looked at the Obliterate and asked "Is that really on your list?" (Everybody in the top 8 had about 20 minutes to review their opponents decklists, so it really shouldn't have been a surprise.) He thought long and hard and finally put the Obliterate on it's own. Alex thinks for a while before taking the other 4 cards. Over the course of the next 2 turns, Alex manages to get the 2nd Void to go through. Danny's bluff was revealed, as he showed his hand of 3 lands, perfectly set up for Obliterate. It was obvious that he never really had a good hope of dealing with the power cards from the Fact or Fiction, and tried to deal with them by making Alex think Obliterate was the only answer. However, Danny was still in fine shape as he still has the Meddling Mage and a Crimson Acolyte in play. Two good topdecks from Alex of Spite/Malice and Pyre Zombie swung the game in Alex's favor. However, Danny had some good draws himself, and just in the nick of time he put out a Questing Pheldagriff, despite Alex's incredible luck of using the Ice of Fire/Ice to tap a land, and drawing an Exclude to try to Exclude it a second time. Again, once the Pheldagriff stayed on the table, it made quick work of Alex.

Summary: This matchup actually looks much more like an aggressive deck versus a control deck. While Counter-Hippo doesn't get off to a very fast start, once it starts making threats, it really becomes an offensive force. The Wavy deck is just trying to handle them so that it can get to 12 mana and burn out its opponent. While the decks match up very well, with many points in these few games where anybody could win, the Wavy deck is never going to look pretty. For this matchup, the decks are even, but Wavy is not for the faint of heart!