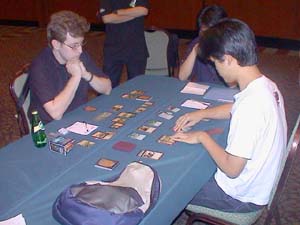 Everyone knows smilin' Alex Shvartsman, Grand Prix party-crasher. It's no surprise to find he managed to run his final table to get a seat in the Top 8. His deck is particularly nasty, a black-green bit of brutality headed by none other than Laquatus's Champion. Shvartsman's used to having that bad boy win Grand Prix for him.

In his way is the more reserved Chang Chua of Singapore. Also no stranger to Grand Prix Top 8's, Chua does it on a more local scale. Today he has a textbook blue-white control deck. Despite Chua's skills, demonstrated again this weekend, Shvartsman remains a heavy favorite, and is brimming with confidence.

Shvartsman started strong, with a Werebear accelerating Dirty Wererat, but Chua was ready with Syncopate. He went to the air with Skywing Aven. Shvartsman stopped that with Krosan Archer. A mediocre Testament of Faith met an equally unexciting Krosan Restorer. Chua stepped things up with Hydromorph Gull. Shvartsman matched with Shade's Form on his Archer, hoping to keep the fliers at bay. He swung in. Chua let it through, and Shvartsman added Chlorophant to his team.

Chua made Shvartsman pay by swinging for five and getting a Phantom Whelp armed with Psionic Gift. Shvartsman tapped out for Crashing Centaur, and had to take another five. He waited for his Chlorophant to get big enough to get past the Testament. Nantuko Disciple shortened the wait, but the Gifted Whelp was eating at his life total.

Finally, Shvartsman swung in with Centaur and Chlorophant. Of course Chua had Second Thoughts for the Chlorophant! The Aven blocked and bounced, but Shvartsman pitched Gravegouger to trample through, then made Gravedigger to get it back. Chua replayed his Aven and passed it back. Shvartsman was at six but forcing damage through. The Testament fell. Chua was at ten.

Chua rallied with Auramancer, Testament and Cephalid Sage. Shvartsman kept the pressure up. Chua's troops dropped like flies. Just as things were looking their darkest, Chua's fliers were joined by Mystic Familiar. And then, Shelter off the top! The Gull was unblockable, and one two-power flier would get through! Chua took the first game!

Shvartsman was downright glum in the second game. He had no play until his fifth turn, and even then it was just a belated Seton's Scout. Chua shut him down with Teroh's Faithful. Crypt Creeper added to Shvartsman's "beats". Chua got in with Skywing Aven, and traded a pitch for the death of the Scout.

But all this time Shvartsman had been dropping lands. Down came the Champion. Chua had Second Thoughts, and desperately hoped he wasn't transparent when he attacked and left five mana up. Shvartsman doesn't fool that easy. Once he tapped lower for a Pilgrim, Shvartsman's team jumped him. His Creeper had earned a Shade's Form, and so was a formidable threat.

An Elephant Ambush augmented his force. Now Chua was getting desperate. He left mana open again, but Shvartsman just sent Elephant and Creeper. The Testament took down the token while the Creeper ate the Pilgrim.

Chua drew his seventh land. He could Ghostly Wings the Creeper, pitching a card to bounce it. That would leave Shvartsman with just one big threat on board, and the threat of Second Thoughts had that at bay. Instead, he dropped the Wings on his Aven, trying to race. He tried to Second Thoughts the Creeper when it came in again. Shvartsman sacrificed it to stop the card draw and put the Creeper back into play. He brought the Ambush back for an encore, and made a Werebear.

He was still miles from threshold, though. The Aven dropped Shvartsman to five, and was joined by Hydromorph Gull. Shvartsman was empty-handed. He drew, and swung with all his guys. The 1/1 Testament chumped the Champ, and Shvartsman extended the hand to his opponent. Chua beamed. "How Lucky!" he said, giggling. Shvartsman could only grudgingly agree.