Luis Scott-Vargas, entering the Top 8 at the top of the standings, and relative unknown Masayasu Tanahashi wasted no time in getting started. Both players were all business, and a language barrier prevented any communication before or between their games. 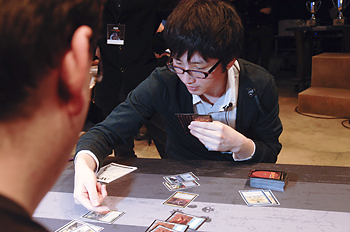 Down a land and another card, Tanahashi conceded less than three minutes into the round when Scott-Vargas played a turn-five Cloudgoat Ranger.

Scott-Vargas mulliganed, then answered Tanahashi’s first-turn Faerie Conclave with a first-turn Windbrisk Heights. Tanahashi played a Sunken Ruins, which forced him to mana-burn for one when he Thoughtseized Scott-Vargas. He saw an awesome hand of two Glorious Anthems, two Bitterblossoms, a Caves of Koilos, and a Reflecting Pool, and thought for awhile before taking one of the Bitterblossoms. Scott-Vargas played the remaining Bitterblossom on his turn and passed to Tanahashi who showed Scott-Vargas a Spellstutter Sprite when he played a Secluded Glen so that he could play Jace Beleron, which he ticked down to two counters to draw a card. This left Scott-Vargas open to play his Glorious Anthem. Jace ticked down to one counter and Tanahashi who played a Faerie Conclave and passed with only three mana available. A Faerie Rogue token killed Jace, and Scott-Vargas played another Bitterblossom leaving two lands untapped so Tanahashi couldn’t counter with a Broken Ambitions. Tanahashi played Spellstutter Sprite at the end of Scott-Vargas’s turn.

Scott-Vargas intently pile shuffled while Tanahashi took some time to take in the scenery, looking all around before what could be his final game of the tournament. 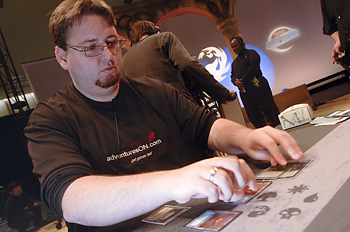 It was mostly futile at this point, as Tanahashi’s deck has a trouble beating a Bitterblossom even with lands, but when Scott-Vargas attacked with everything Tanahashi blocked the Tidehollow Sculler and Peppersmoked it to get his Bitterblossom back. Luis added a Knight of Meadowgrain and a Kitchen Finks to the board, knowing Tanahashi’s 75 did not include Infest. Tanahashi still hadn’t hit his third land, and he was now too far behind to even play his Bitterblossom. Instead, he left his mana open for an Agony Warp, but when Scott-Vargas played a Glorious Anthem, Tanahashi was out of options. He conceded after drawing his next card.

Luis Scott-Vargas defeats Masayasu Tanahashi 3-0 and advances to the Semifinals!