here was a kind of nervous energy to both teams as they made their way to the table. They double-checked sideboards, shuffled relentlessly, and eagerly awaited the starting announcement. New Zealand Captain Walker Macmurdo would be coaching for his team, and Kristian Janda would coach for Team Czech Republic. Good lucks were exchanged, and they were off.

The Czech Team's higher seed put them on the play for Game 1, and Mendl took full advantage. He played out the ideal opening against Blue-White Red: turn one Elvish Mystic, turn two Domri Rade. It provided him a steady stream of creatures while Carter could do nothing but play out his lands. He managed to burn Domri out after Mendl used Domri's Pit Fight ability, but Mendle had another copy of the planeswalker at the ready. A Warleader's Helix took it out almost immediately, but Carter had no answer for the many creatures it had served up. 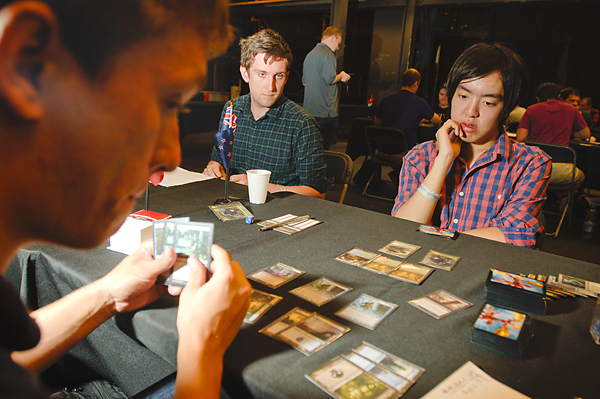 New Zealand goes up against Stanislav Cifka and the Czech Republic in the Quarterfinals of the World Magic Cup.

Carter was on the play for the second game, and so was able to Syncopate for one when Mendl again had the brutal opening of Elf into Domri Rade. Unfortunately, that meant he had no countermagic left to stop a Burning Earth that came down shortly thereafter. Worse, he had yet to draw a Detention Sphere to clear it off the table, and had only one basic land to his name. Carter fought on, but the one-sided Manabarbs was simply too much to overcome. Adding insult to injury, Detention Sphere showed up just in time to watch Carter take lethal damage from creatures. Team Czech Republic had taken the first match win.

Carter relayed the bad news to his teammates, explaining how brutal Domri Rade had been. "I don't think he missed once." Czech Captain Cifka could only laugh and joked, "Yeah, he's very good with Domri. He's been training all week!"

Shuffling up for their first game, Chung asked Cifka what he thought about their matchup. Cifka laughed and shook his head. "I have a secret plan...I lose fast and coach my teammates!"

On paper, the middle match seemed to be a lock for New Zealand. Cifka estimated his chances at about ten percent. Of course, that was before Jason Chung had to send back his first two hands, starting on just five cards. It got worse in a hurry. Cifka slowed down the early attackers with Ratchet Bomb and an Augur of Bolas, and then tapped five for his deck's ace in the hole: Curse of Death's Hold. 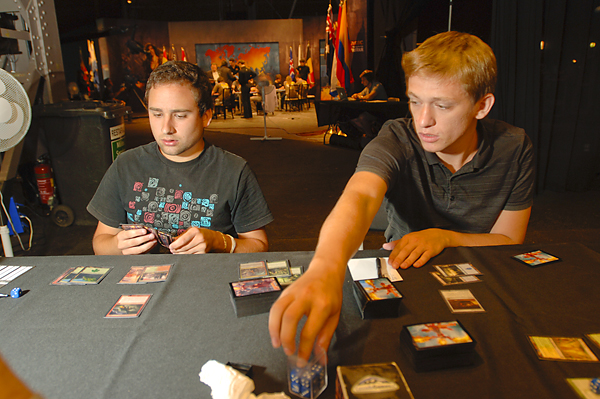 Cifka keeps his eyes on his teammates and their matches along with his own.

Suddenly Young Wolf and Strangleroot Geist weren't the resilient threats Chung needed. Cloudfin Raptor and Experiment One were blanked entirely. Chung watched as Cifka resolved Opportunity, then a couple turns later did it again with Snapcaster Mage. That was enough to convince Chung to move on to Game 2.

While Cifka considered a mulligan, the C Seat match was hitting a key point. He leaned over and was soon engrossed in his teammate's match. He was forced to turn his attention back to his own match or face a slow-play penalty. He immediately threw his hand back for another, and turned back to advise his teammate as he shuffled.

This match had gone quickly. In the first game, Zheng joined his teammate Chung in a mulligan to five. Hardly the best against a Hexproof deck on the play. Kopecky gave him little time to recover, leading out with Invisible Stalker, then Ethereal Armor and Rancor, and finally a Geist of Saint Traft. Zheng had no miracle Bonfire of the Damned waiting for him, and conceded.

The second game had gone much better for Zheng. He didn't have the all-important turn-two Farseek, but seized his chance after Kopecky led with Avacyn's Pilgrim and then Voice of Resurgence without playing a second land. Zheng tapped three for a Bonfire for one, hoping to cripple Kopecky's mana. He wouldn't have it so easy. Kopecky plucked the land he needed and dropped Spectral Flight on his Voice and hit for 4. 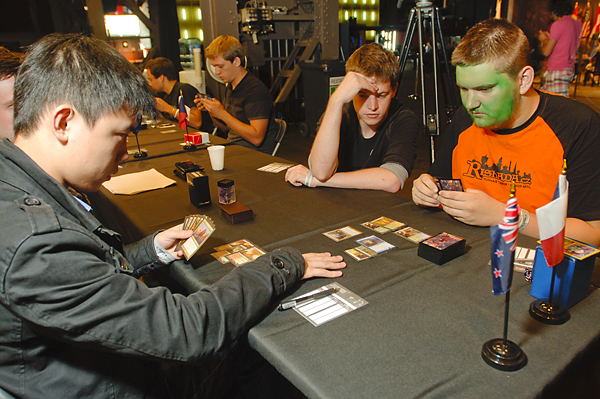 Leos Kopecky's Hexproof deck presents many threats that are difficult to answer.

Zheng had three options for his turn four: Huntmaster of the Fells, Liliana of the Veil, or Vampire Nighthawk. He settled on the Nighthawk and was able to play a slow game behind it when Kopecky failed to have Etherial Armor to push past it. He played out his hand of powerful spells, and quickly evened the match at one game apiece.

So the pressure was on Zheng for the third game. If he lost, New Zealand were eliminated. Kopecky drew Voice of Resurgence a turn late, and so his first attacker was a turn three Geist of Saint Traft. Zheng played a third land and passed. Janda and Cifka were both leaning over, discussing Kopecky's next play in depth. They agreed on playing out Voice of Resurgence, then giving the Geist a Rancor to play with, attacking Zheng to 12.

Zheng had the perfect answer, but still confirmed with Captain Walker Macmurdo before making the play: Barter in Blood. Kopecky was left with a 1/1 Spirit in play. He untapped, and he and his teammates thought and talked. And talked and thought.

And this was where Cifka was encouraged to play faster and bought time with a mulligan. They settled on a gutsy play: They dropped all their enchantments on the Spirit. Rancor, Spectral Flight and Ethereal Armor made the Spirit an 8/6 behemoth, and left Zheng at 4 life. Did he have removal?

Zheng slid the top card off his deck and very carefully peeked at it, not even letting his teammates see it. He looked the board over twice, and then extended his hand in defeat.

The Czechs couldn't contain their excitement. Kopecky let out a loud cheer and jumped up to to high-five his captain, sending his chair flying backwards. They immediately reined in their exuberance, though, out of respect for their opponents. There were handshakes all around, with New Zealand congratulating the Czechs on their win and wishing them good luck in the semifinals, and the Czechs congratulating New Zealand for a great and hard-fought performance this weekend.