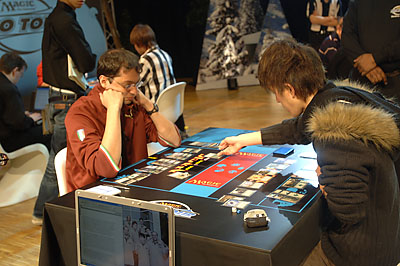 Willy Edel and Kenji Tsumura are two of the hottest players on the tour today.illy Edel is the hottest player on the planet. The 27-year-old Brazilian first charged onto the scene with his Brazilian teammates at Pro Tour - Charleston last year, where they made the finals, then reappeared in the finals of Kobe in October where he lost to Jan-Moritz Merkel. Now he's in his third Top 8 in four major events and hoping to be the proverbial bride this time. Standing in his way is probably the last player he wanted to see in the Quarterfinals, five-time Top 8er Kenji Tsumura. Kenji and countryman Takuya Osawa demolished the field this weekend, sitting atop the standings for almost the entirety of the first two days. Kenji was also in the Top 8 back in Merkel's Kobe, and has also played the bridesmaid role before while never winning a trophy. Today he'll be looking to cement the growing aura around him, matched only by that of Kai, Jon, and perhaps Nassif in Magic history.

The draft went quite well for Kenji. He opened Firemaw Kavu and then started picking black cards, but he was firmly pushed into green while the two players in front of him squabbled over the black pickings. Once his colors were set, he ended up with a very strong red-green deck with removal, fat, and card drawing (thanks, Planar Chaos!). Edel, on the other hand, was not so fortunate. His first two packs went well and he said that he set himself up to receive the green and blue goods in Planar Chaos, but the packs and players in front of him did not cooperate. This left him scrambling for playables in a format typically loaded with them, and created a need for him to splash a pair of Whitemane Lions. He said he might have a chance in a three-game match, but with the elimination rounds playing as the best of 5, he felt he'd need a minor miracle to pull through.

Kenji suspended a Giant Dustwasp on turn two, while Willy suspended Durkwood Baloth and Search for Tomorrow. Kenji also suspended Nantuko Shaman, meaning this game would get very interesting as soon as things woke up from their suspended animation. Willy had a Coral Trickster to keep off any Nantuko beatings for a turn and then cast Spiketail Drakeling, which was then immediately sacrificed to keep Kenji from drawing cards from kicked up Citanul Woodreaders. The Baloth came into play and bashed immediately, while Utopia Vow turned Kenji's plus-size dirty wasp into nothing more than a mana producer. Firemaw Kavu from Kenji targeted Coral Merfolk, but Willy went tricky (as he had all weekend, when he almost exclusively drafted white cards), using Whitemane Lion to return it to his hand. The action was fast and furious, as all of this was happening within the first few minutes of the match.

A reappearance from a morphed Merfolk was matched on Kenji's side by Radha, Heir to Keld, and the board remained fully stalled. A second morph from Willy resolved, and Kenji targeted the first with Orcish Cannonade before the turn ended. The game moved along at a brisk pace, but at this time nothing was happening. Willy was either filling his hand with land or playing it slow, content to keep the board where it was for now. Meanwhile, Kenji had a slight creature advantage but also needed to draw into some tricks in order to break through. Tsumura cast a pair of creatures in a turn, finally allowing his Herd Gnarr to get big, and breaking through for 6 damage, dropping Edel to 8. Edel struck back on his side, putting the Forestwalking Yavimaya Dryad into play, giving him an evasive damage source that would go a long way toward breaking any further stalls.

Kenji agreed with this assessment and a turn later cast his own Durkwood Baloth before attacking with Herd Gnarr and Firemaw Kavu. Both of Kenji's creatures died, but Tribal Flames killed the Slipstream Serpent that Edel unmorphed, and then Grapeshot finished Edel's Baloth, killed the Dryad, and still had a point left over to smack Willy upside the head as well. That made the life totals 7-6 in Edel's favor. At this point, Kenji again played it cool, content to wait for a final set of creatures or tricks to finish the game. Deadwood Treefolk got back Yavimaya Dryad for Willy, and Tsumura's second Kavu was foiled by Shaper Parasite. Just when it looked like Edel was fully on the ropes, he used Evolution Charm to give his Treefolk flying, attacked with it and the Dryad, and then threw Psionic Blast directly at Kenji's face for the win. 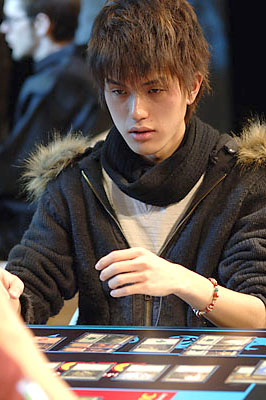 Kenji puts the 'able' in 'unflappable.'

Kenji chose to play for Game 2 and kept his seven cards, while Edel threw his hand back. Tsumura led off the game with Radha, with Edel answering via Coral Trickster. Kenji pushed Radha into the red zone and then used her mana generation to power Orcish Cannonade on the fish. Yavimaya Dryad gave Willy another blocker, so Kenji used Radha's peacetime abilities to power out Giant Dustwasp a turn early. Edel then suspended Search for Tomorrow and plopped down a morph, keeping Kenji guessing. Kenji pushed both men (or more correctly, wasp and woman) into the red zone again and cleared the board this time, using Dead // Gone to pop the morph and Tribal Flames after combat to wipe out the Dryad. Edel then clogged up the ground with Durkwood Baloth, but Kenji again had what he needed, attacking through the now pacifistic beast via Utopia Vow. Suq'Ata Lancer from Kenji gave him the final push he needed, dropping Edel to 3 on that attack, and the Wasp finished the job a turn later.

Willy's face fell upon looking at his opening hand for Game 3, signaling another Paris for the talented Brazilian. He knew he was at a deck disadvantage here, and was certainly not getting much luck of the draw here either. He kept his second set of cards, turning a Terramorphic Expanse into a Plains on turn 1, while Tsumura had a suspended Keldon Halberdier on turn two and Suq'Ata Lancer on turn three. Edel also went on the offensive on his turn, attacking with Wormwood Dryad and following that with a morph. Evolution Charm for a Forest gave Willy his fifth land, while Tsumura took beats from both of Edel's men.

Harmonize reloaded Kenji's hand, but Willy stayed aggressive and tricky, choosing not to make his Dryad evasive when he attacked with it and his morph. Tsumura took the bait and blocked the Dryad, getting trampled on by Strength of Numbers but saving his Lancer after damage was assigned with Thrill of the Hunt. Another attack from Kenji was stymied a bit by Coral Merfolk, but the Halberdier was now in play, and Kenji's attack plus Tribal Flames and Grapeshot cleared the board and set up lethal on the next turn. Willy just shook his head before shuffling his hand into his deck and heading to game 4. 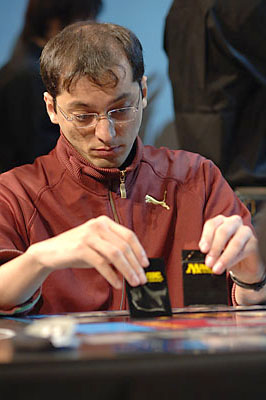 Are you an out? Hmmm…

It was Tsumura's turn to mulligan, but his deck provided a very welcome Magus of the Library on turn two. Willy asked "How many cards?" and then chuckled at the answer of 5. Instead of loading up his hand, Tsumura used the Magus's other ability to put out a turn-three Herd Gnarr while Edel kept busy on his side with Wormwood Dryad and Might Sliver. Dead // Gone killed the Dryad, keeping evasive damage off of Kenji for the time being. Edel replaced the Dryad with Viscerid Deepwalker, but Kenji got his card advantage back, kicking up some Citanul Woodreaders and then trading his attacking Herd Gnarr for Edel's Sliver. Evolution Charm from Edel grabbed the second Island from his deck. Phantom Wurm from Edel tried to stall the ground, but once again Kenji had the Utopia Vow for Willy's fattie, and blew right past the Wurm, dropping Edel to 10. Durkwood Baloth stopped the ground attacks, but he quickly had to worry about a new aerial threat, as Kenji's Dustwasp again made an appearance in the game.

Edel wasn't done churning out animals who shop at the Big and Tall store, using Deadwood Treefolk to return Might Sliver to his hand and then locking down the Wasp with a Utopia Vow of his own, replaying the Sliver plus Yavimaya Dryad a turn later. The attacking had stalled, but the pace of play was lightning-fast. Tsumura began taking damage from Dryad daggers but used a pair of suspended Nantuko Shamen to keep the flow of creatures and cards going. Orcish Cannonade sent the Dryad to the bin, and Kenji's side of the board was rapidly becoming clogged with slightly undersized men and Saproling tokens disguised as signed Rich Hoaen player cards. Suq'ata Lancer plus new recruit Firemaw Kavu killed Edel's blocking Baloth, and that was basically the end of Willy's resistance, thanks to a glut of lands and Tsumura's mastery.