Quarterfinals: And in this Corner, the Challenger…

De Rosa is the reigning National Champ, but he had to run the table Saturday just to give himself a shot at repeating that feat. He's facing a pretty bad matchup here in the quarterfinals, a deck wielded by the man De Rosa called the best player in this Top 8 - Luis Scott-Vargas. De Rosa's GhaziGlare was a good choice against the rest of the field, but with the Top 8 sporting heavy control and the matches playing out as the best three out of five, it would take more than a fair share of luck for De Rosa to lead the U.S. National team in Paris this November. 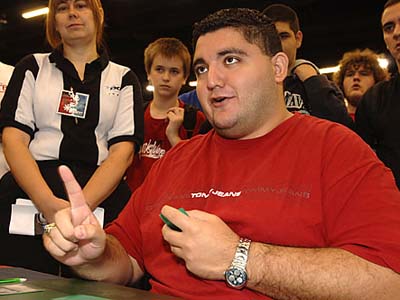 'But what you're forgetting, Mr. Bond…'

De Rosa had to mulligan his opening hand, and then gave the tiniest fist pump when Scott-Vargas had to do the same. A first-turn Llanowar Elf was a good start for Ant. Scott-Vargas laid a pair of lands on his first two turns, while De Rosa cast another Elf and Umezawa's Jitte. One attack with the Elves succeeded, but a second one met Mortify after De Rosa chose to pump it twice.

Scott-Vargas repeated the earlier Mortify play two turns later, but this time the Elf was joined in the fray by Selesnya Guildmage. Wrath of God a turn later made sure the One Man Gang did not recruit his own army, but De Rosa followed that immediately with Arashi, the Sky Asunder. Scott-Vargas failed to deal with the legendary spirit, and that was Game 1 for the champ.

"I don't like where dis is going," said Ant as Scott-Vargas dropped Ink-Eyes and another card into the bin. "You know yesterday I was wondering 'What is the one card I at least know he will take out?' I would have thought fer sure that Ink-Eyes was the one card you'd take out. That just goes to show you what I know."

Zombify on Ink-Eyes a turn later gave Luis the fattest rat on the board, but the legendary Servant of Oni was now staring down a pair of Wood Elves and a Watchwolf. Ink-Eyes kept running into green chump blockers while De Rosa got some damage through with Watchwolves. Until, that is, Minamo, School at Water's Edge untapped Ink-Eyes and killed a wolf. Compulsive Research discarding Angel of Despair set up another Zombify, which let Scott-Vargas grab a Watchwolf out of De Rosa's graveyard. The offense continued to mount for Luis, with Kokusho, the Evening Star hitting the board, but Ant answered back with first an Arashi and then Yosei, the Morning Star. Scott-Vargas threw all his men into the red zone a turn later and made sure that De Rosa's Yosei did not die by using Eiganjo Castle to prevent 2 to the legend. Crisp, exciting play from the Northern California player.

De Rosa played Miren, the Moaning Well to give him a chance at not dying and locking Scott-Vargas down for a turn, but Luis avoided combat by casting his second Kokusho, winning the game with the Kokushos' exit from play. 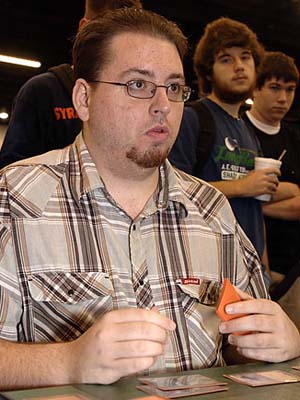 Wrath of God cleared the board, Condemn got rid of a Saproling token from Vitu-Ghazi, and down came Yosei for Scott-Vargas. De Rosa cast another Selesnya Guildmage and Wood Elves, giving him Jitte wielders. Kokusho joined Scott-Vargas's army, but De Rosa had an answer for the double dragons, attacking with his weenies first and then channeling Arashi, killing the spirits at the cost of 5 life and a lost turn for De Rosa.

Angel of Despair finally let Scott-Vargas kill Ant's Jitte, but Yosei for De Rosa this time further complicated an already complicated game. Mortify at the end of De Rosa's turn killed his dragon, and this time it was Scott Vargas skipping a turn. In spite of al this action, it was still De Rosa 14- Scott-Vargas 11.

De Rosa cast Kodama of the North Tree and then tutored up three Yosei, the Morning Star to the top of his deck with Congregation at Dawn. One Yosei bit it to Condemn, but obviously De Rosa had more where that came from. Scott-Vargas cast Kokusho a turn later, then attacked the next turn and Wrathed the board clear. De Rosa tried to hamper Luis with Hokori, but Scott-Vargas had a host of Signets on the board plus Azorius Chancery, so Hokori was little more than a nuisance. 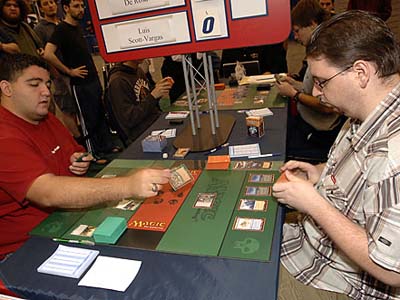 De Rosa fell prey to his own Hokori plan.

Scott-Vargas untapped and cast Angel of Despair, killing De Rosa's final Yosei - willing to bleed a bit in favor of getting a big threat on the board. Now it was De Rosa who was being hampered by Hokori. Selesnya Guildmage was Remanded, and Scott-Vargas followed his next untap with Kokusho, getting a frown from the big man. One more untap from De Rosa and Scott-Vargas was up two games to one, leaving De Rosa shaking his head after an epic Game 3. "I screwed up… man, I am so bad!"

De Rosa had to mulligan to lead off game 4, but was able to get in the game immediately with a Watchwolf. The wolf lived for only a single breath, dying to Last Gasp as a mere cub. De Rosa had a slow draw, but he did have Vitu-Ghazi pooping out little saprolings. Scott-Vargas cast Yosei, the Morning Star, but De Rosa had Glare of Subdual to keep the white dragon down.

De Rosa tried to cast Yosei, but Scott-Vargas Remanded it, forcing De Rosa to cast it again, and tapping them both down again. Another attack from Luis and another blank turn from De Rosa sealed it - the Champ's reign was no more.

Luis Scott-Vargas wins 3-1 and moves on to the semifinals.