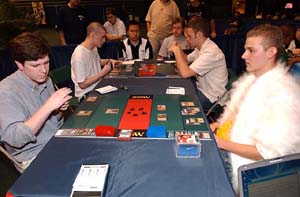 Quelle stood resplendent in his borrowed finery, Peter Szigeti's ludicrous fur coat over his narrow shoulders. Around him, shedded strands clung to the table, and in between his sleeves. Andrew Ranks wore the reserved look, but truth be told, this coat could make even them most unkempt of hobos seem dapper.

Quelle lost the die roll, and lamented that he was now 0-13 in opening rolls. The odds against, he said, must be incredible. An agitated Zvi Mowshowitz couldn't resist computing the result and shouting it for all to hear.

Quelle led with Basking Rootwalla and tried an early Looter. Ranks was ready with Force Spike. Quelle just nodded. Next turn Ranks tapped out for a 'Tog, pitching another and removing his graveyard to kill the incoming Rootwalla. So far, it seemed like everything was going exactly according to plan for Ranks.

But his fourth land was a second Salt Marsh, giving Quelle a window of opportunity. He made him pay with Violent Eruption in a bid to take down the 'Tog. Ranks pitched Counterspell and Fact or Fiction to save it. He had a second Fact or Fiction in hand, and sent Deep Analysis and two land into the graveyard to snag Nightscape Familiar and Circular Logic. Quelle finished the job with another Eruption.

Ranks brought down his Familiar. Quelle made a Flametongue Kavu. Ranks went for Repulse on his Familiar to force a suicide. Quelle came overtop with Gainsay. And just like that it seemed like the pendulum swung Quelle's way. He untapped and threw down Mongrel and Arrogant Wurm. Ten power worth of creatures against his opponent's lone regenerator.

But Ranks wouldn't give. Deep Analysis and its flashback drew him into Psychatog number three, stunning Quelle. Quelle smashed in, losing his Wurm to the Psychatog while Nightscape Familiar chumped Flametongue. A kicked Probe left Quelle with nothing and Ranks with the deed to a gas station. He triple checked the calculations, and a flashed-back Deep Analysis gave him the cards to swing for the win that turn.

Game 2 started off firmly in Quelle's control. Rootwalla came down and started hitting for three, pausing only to let Fire remove an intervening Nightscape Familiar. Ranks was already at nine. He Repulsed, and countered the Rootwalla on the way back down. A hard-cast Arrogant Wurm made it in. Psychatog stepped up to bat.

Quelle untapped and swung in. Ranks blocked and pumped up to 4/5, but Quelle was ready for him with a Repulse on the 'Tog. Ranks countered back, but tapped out to do so. Quelle beamed and he slammed down Disrupt. The Wurm trampled past the vanished blocker, and now Ranks was at five.

A main-phase Repulse took out the Wurm, and he dropped Psychatog. Flametongue Kavu elbowed it. Ghastly Demise returned the favor, but Ranks was running out of time. He tried Fact or Fiction. Quelle had been saving Circular Logic for just such an occasion. The Wurm returned.

Back firmly against the wall, Ranks had no choice but Upheaval to reset the board. Quelle made Aquamoeba. Ranks brought out Psychatog. Quelle made a Rootwalla at the end of the turn, the death knell. He got through for three on the following turn and made another Rootwalla and an Arrogant Wurm. Ranks drew, and then scooped.

It's always a bad thing when Merfolk Looter goes uncontested. Ranks had Nightscape Familiar, but no follow up. His Duress saw Gainsay, Cicular Logic, Repulse, another Looter, and a Rootwalla. Grim. He took Gainsay. The Looter started working. Rootwalla was countered, but Wild Mongrel came down just fine. 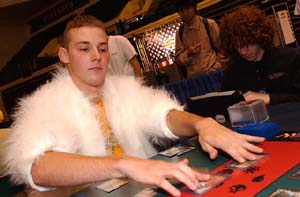 Ranks's three Underground Rivers were making things tough on him. A kicked Probe drew out the Circular Logic, but Quelle dispatched the Familiar with Fire. He swung, and Ranks was at thirteen. He tried to step in the way of Quelle's card advantage by Repulsing the Looter. Quelle decided to up the beats instead with Rootwalla.

Ranks Duressed, and saw two Flametongues. He frowned. He went through the motions of defending himself with Nightscape Familiar, but it just wasn't happening. Quelle soon attacked for the win.

"Do you want to wear the coat this game? It's comfortable." - Blake Quelle

Clearly, Quelle was brimming with confidence. Ranks, by contrast, was as impassive as ever. He opened with Duress and caught Memory Lapse, leaving behind four land, Wild Mongrel and Flametongue Kavu. The Mongrel got stopped by the mighty Force Spike. Quelle's hand had not improved.

Now it was all Ranks, all the time. Quelle had no third-turn play, and the lack of pressure was music to Ranks's ears. He tried an end-of-turn Fact or Fiction, but was stopped by Circular Logic. Quelle continued to draw no action, waiting for a chance to use a newly-drawn Logic. They passed a few uneventful turns. Quelle broke the silence with Looter. It was Repulsed. Quelle tried again. This time it was Ghastly Demise, and Quelle's Repulse for the rescue met Memory Lapse.

Quelle couldn't let that stand. Flametongue Kavu came down to tie-up the Familiar. Another threatened to start doing damage. Ranks dispatched it with Counterspell. The other fell prey to Ghastly Demise, with Memory Lapse again stopping any Repulse tomfoolery. The lone Familiar continued to whittle Quelle, bringing him to single digits.

Quelle shifted gears, bringing out Mongrel and then Arrogant Wurm. Ranks was ready with Slay, but Quelle's draws had improved. He tried to save with Repulse. Ranks countered. Quelle trumped with Circular Logic. Undaunted, Ranks untapped and tried a Fact or Fiction. He had Counterspell for Gainsay. Again, though, Quelle had the Logic.

Fortunately for Ranks, Quelle was reduced to a single Wurm in hand. He calmly drew a second, and hit for two before busting them both out. Ranks put his hopes in the Cephalid Coliseum. It rewarded him with Psychatog. Quelle had Aquamoeba but couldn't attack all-our for fear of Repulse.

The 'Tog ran in, and Quelle gang-blocked with everyone. Ranks spent all but his last card eliminating Quelle's team. Quelle untapped and peeled a Mongrel. Now it was his turn to be frustrated. The last card in Ranks's hand was Counterspell. He untapped and turned the 'Tog sideways.

Fact or Fiction, right off the top. It turned over four land and Upheaval. The three-two split meant that Ranks could only deal eight, so he took the Upheaval pile. Quelle got one more draw. Ranks attacked and pumped for lethal damage. Quell tapped three, but smiled and revealed his last card was not, in fact, Repulse.

The nerves of going into the last game with so much on the line was mollified, thanks to the healing power of Peter Szigeti's coat. 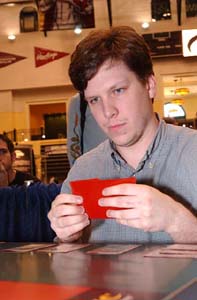 Ranks was relieved to be back in it, but going second was not confident. Quelle opened with Mongrel. His next play of Aquamoeba was countered. Duress took care of Circular Logic before it could be a problem, and another Aquamoeba was countered. Still, Quelle's Mongrel was swinging the whole time and he had pulled a lot of action from Ranks's hand. Ranks's Repulse on a fresh Rootwalla met Memory Lapse.

The Rootwalla was replayed and Demised. Quelle cycled Disrupt but came up empty. Ranks Repulsed the Mongrel. Neither player had anything of note, and they passed another turn of Repulse and replay. Finally the Mongrel stuck. Quell had nothing more to add. That was good news for Ranks, whose Nightscape Familiar could hold the fort. To Quelle's credit, he bluffed a powerful six-card reactive hand.

Finally Quelle drew into Arrogant Wurm, but Ranks was ready with Demise. Quelle tried Repulse and got countered. Flametongue Kavu pushed though more damage. Ranks was at seven. It was time for all that to pay off. Ranks tapped eight.

Of course, it was Upheaval. Quelle minimized its effect with a pair of Disrupts. Off the second, he drew Circular Logic, and threw it down like it was the end of the game. With his lone remaining mana, Ranks showed Force Spike. It was back to square one.

Ranks made a Familiar, and Quelle chose to hold back on Mongrel to ready his Memory Lapse in anticipation of Ranks's 'Tog. Ranks allowed himself a small smile as he played his own Lapse. Quelle resigned himself and put down his Mongrel. Ranks swung in and removed enough cards that Quelle couldn't save it after damage was put on the stack. Quelle untapped and hoped Flametongue would stick. Ranks had yet another Spike. Quelle extended the hand.