Antoine had a fairly standard Blue-White control deck similar to his brothers, except that he does not have Mageta, the Lion in the main deck, but Laurent's 'Counter-Crosis' deck was certainly original. While it doesn't feature Crosis himself it does have his Charm and his Catacomb. It uses card-drawing, counters, and eventually kills with Pyre Zombie. While these cards may seem disparate the deck has certainly served Laurent well in the Swiss. 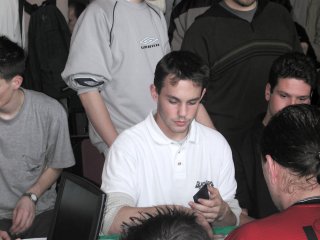 Before the match started the players were allowed a few minutes to look at each others deck-lists.

Antoine started first but couldn't be too happy with his hand of five lands, Tsabo's Web, and Story Circle. Laurent chose to discard Nether Spirit immediately, and it began to attack on his third turn. Antoine waited until he could play the Story Circle with Counterspell back-up. Pagorek only had two lands anyway, and had to discard Fact or Fiction.

The Story Circle came into play, and neither player did anything significant for a few turns, until Antoine played a Millstone. Pagorek had finally found four lands, and had a number of things he could do. He chose to play Crosis's Charm for it's least common use, destroying Ruel's Millstone, and Antoine countered it.

He had to allow a Lobotomy which revealed that Antoine had only land and Story Circle in his hand, and Laurent destroyed his Millstone with a Void. Unusually for a Red-Black deck, Pagorek could deal with Story Circle as his Crosis's Charm allowed him to return permanents.

With Ruel holding only land, Laurent took advantage by casting Fact or Fictions, but Antoine soon found some card-drawing of his own, and the game reached a position where both players had seven cards in hand and lots of land in play, the only non-land card being Antoine's Story Circle.

Ruel was drawing better than Laurent, however, and he managed to force a Millstone into play with six Counterspells in his hand. Laurent's only way to win now was by casting both Urza's Rages in his hand with kicker, and as Antoine was on fourteen he would need three Absorbs to survive.

Laurent brought in Lobotomy, Disrupt and Misdirection, while Antoine went up to a full complement of Last Breaths, and also brought in Gainsay, Misdirection, Nether Spirit and a fourth Millstone.

This time Antoine's starting hand was four land, two Gainsays, and an Accumulated Knowledge, again hardly ideal, and Laurent had plenty of mana this time, casting a Fact or Fiction on Antoine's sixth turn. Ruel had Gainsay but chose to let it resolve instead, and it showed a Nether Spirit which Laurent sent to his graveyard.

The Spirit came back and began to attack Antoine who seemed able to draw nothing but land, something like six in a row. Pagorek found some land of his own and tried to Void but Antoine used Foil on it. Finally Antoine drew a Fact or Fiction after Laurent had discarded a second Nether Spirit, and this gave him Counterspell and another Fact or Fiction. The second Fact was a good one giving him a Counterspell, a Millstone, and an Accumulated Knowledge.

Ruel tried to cast the Accumulated Knowledge immediately as he was on twelve and wanted to find an answer to the Nether Spirits before going below ten because of Urza's Rage. Pagorek Undermined the Knowledge, putting Antoine on nine, and then attacked with his Spirits for four more damage.

Antoine had no answer to the Spirits in his hand and would die in two turns. He drew Mageta, the Lion, but it wasn't quite enough as Laurent had drawn so many extra cards with Accumulated Knowledge. Antoine had to use Misdirection on Laurent's Counterspell to save his Mageta from Crosis's Charm, but this left him without cards in his hand and he succumbed to two Urza's Rages to the head on Pagorek's next turn.