Jonsson could have been a solid contender in the Rookie of the Year – if he did not compete in just one Pro Tour previously. It is definitely this season that has marked the breakout in his career, as Jonsson went on to top 8 at Pro Tour: New Orleans and buff up his pro standing with a string of solid Grand Prix finishes. With a second top 8 in the same season, Jonsson is certainly looking to become one of the game's elite. Jonsson drafted a solid black-red deck with triple Barbarian Outcast and many flashback cards.

Brian Davis' career began at Pro Tour-Chicago 1999. He made finals in his very first Pro Tour, but lost to Bob Maher for the title. Davis has been a Pro Tour staple ever since, winning the Rookie of the Year title that season and posting a number of very solid finishes, including a 9th place at Worlds 2000. He is now back for his second top 8 cameo, but it looks to be an uphill battle. Davis ended up with one of the weaker decks at the table, forced to draft the dreaded red-white archetype. 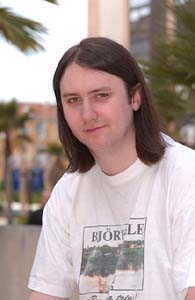 Jonsson won the coin flip, choosing to play first. Both players kept slow hands in the opening bout of the match, resulting with no creatures being played until Davis's third turn. Davis summoned Militant Monk, only to lose it immediately to Engulfing Flames. Although Jonsson was not casting any creatures, he was easily able to keep up with Davis as he used Chainer's Edict to take out the Petravark on the following turn.

First blood was finally drawn when Davis used Firebolt to destroy the Zombie Assassin that Jonsson tapped out to summon, attacked with the Chainflinger and added more pressure by summoning an Ember Beast. It may have looked as though Jonsson was in a bit of trouble for a moment, but he actually had things firmly under control. Jonsson used Ghastly Demise to kill Chainflinger, and then summoned Gravedigger, returning the Assassin back to his hand. Main phase Demise was cast because Davis was tapped out, and Jonsson did not want to chance it being countered with Shelter.

To keep up pressure, Davis was forced to summon his Pardic Arsonist without waiting for threshold. Jonsson cast an Ember Beast of his own, having his Gravedigger serve as a lightning rod for Davis' Firebolt with flashback. Davis was able to get six points of combat damage through. Jonsson cast nothing on the following turn. Encouraged, Davis attacked again, only to find his Ember Beast turn traitor when Jonsson cast Temporary Insanity. Davis lost his Arsonist in combat and cast Hallowed Healer and Mystic Visionary. With Engulfing Flames still in Jonsson's graveyard, he knew he'd be losing the Healer – but Jonsson would likely be forced to spend a turn to do it, allowing Davis to deal an extra five points of damage with Ember Beast and the Visionary. That is precisely what happened, with Jonsson ending up on seven life. Davis however, had no play to make on his next turn.

Jonsson cast Zombie Assassin, only to have Davis Sonic Seizure it at the end of turn, and attack for yet another five points of damage. Jonsson was now down to two life points. He used Morgue Theft to reanimate Gravedigger and summoned Braids, but Davis top-decked Acceptable Losses and his creatures walked past Jonsson's Ember Beast again to finish the game.

Prior to the match, Davis offered Jonsson a money-split. As Jonsson had already split with other players before, he declined. Despite being a game up on the match, Davis re-offered a split, but it was declined again.

Jonsson was able to draw one of his many Barbarian Outcasts this game, able to summon it on turn two – but had no more creatures to cast for a while. He used Englulfing Flames to take out Barbarian Lunatic and then summoned a second Outcsat on turn 4. Davis summoned a Mystic Zealot, but that did not deter Jonsson from attacking with his pair of 2/2 creatures. Davis chose not to find out the hard way whether his opponent was bluffing, taking the damage.

Rather than play the control game with the Ember Beast that Davis just summoned, he decided to race. He cast Reckless Charge on the Beast and attacked with both creatures, making the life totals even at twelve points. Jonsson tapped six mana and cast Firebolt twice to take out the Zealot, leaving Ember Beast with no friends in play. Davis' options were to summon a Pardic Lancer, or cast Mystic Visionary and Charge it up to bring Jonsson down to four life points. Davis chose to cast the Lancer.

Jonsson cast Sickening Dreams discarding Ember Firebeast and then re-cast Engulfing Flames out of the graveyard. Turnabout is fair play – it was Davis' Ember Beast that watched helplessly as it's masters life total was being ripped to shreds in this game. Davis summoned a Mystic Visionary with Shelter backup, but he was down to three life. Jonsson cast Chainer's Edict and then attacked with his two Outcasts. Davis cast Sonic Seizure and traded the two remaining creatures in combat – he did not have any white mana available for the Shelter.
Jonsson drew the seventh land and cast Caustic Tar he was holding in his hand from turn one to finish Davis off.

Both players had sub-par hands in the third game. Davis kept two Mountains, a Mad Dog, a Fiery Temper and several white cards. Jonsson had an even tougher decision – his hand featured a pair of Swamps and five white cards – including Firebolt and a pair of Barbarian Outcasts. He thought about it for a while and finally chose to mulligan, though I would have probably kept that hand going second. The decision to mulligan certainly did not pay off, as his new hand featured one land only. However, it also had Sickening Dreams and Jonsson really did not want to go down to five cards, so kept this hand.

Jonsson skipped his second land drop, then played a Swamp but could cast nothing. Meanwhile, Davis was beating him down with Mad Dog but had not drawn any white mana yet. Jonsson chose to cast Sickening Dreams for two rather than discard a card next turn. It was now down to who would get out of their mana problem faster. Davis kept playing Mountains – and a Ravaged Highlands for a chance to play at least one white spell- and summoned a Pardic Lancer. He then drew Plains to cast Stern Judge.

Jonsson never got to cast another spell that game. Davis attacked again, activated the Judge, and sent six points of direct damage at his opponent. 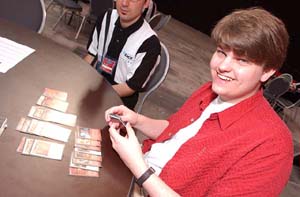 Unlike the previous game, Jonsson got a perfect opening hand. He summoned Barbarian Outcast and then cast Volcanic Spray to take out a Visionary. He was sitting on more creature removal but did not have the attackers, as Davis used Firebolt to take out the Outcast. He finally drew Morgue Theft to reanimate the Outcast. Davis got stuck on four mana holding a number of expensive cards in hand, but was able to summon Pardic Arsonist.

Jonsson summoned Chainer, only to lose it to Sonic Seizure and recast the Edict to take out Stern Judge. Down to five life points, Davis tapped out to Firebolt the Lunatic out of the graveyard, finally stabilizing the game. Jonsson cast a second Morgue Theft (out of his hand, not flashing back the one in the grave) to get back Chainer and summon it. Ceding even more card advantage, Davis killed it via Acceptable Losses.

With Chainer back in play, joined by another Barbarian Outcast, Davis had no better play than to summon Mad Dog and attack with it using Reckless Charge. He discarded a card to Hypochondria to survive the next attack at one life point. The next attack forced Davis to lose the remnants of his hand and Hypochondria to survive the following attack, and fell to the one after that.

Davis opened with Hypochondria, promising some trouble for Jonsson down the road. Jonsson had immediate trouble for Davis though, as he played out a pair of Barbarian Outcasts and a Rotting Giant. Davis finally sound a creature on turn five, casting a Mystic Zealot – but it was immediately stolen via Faceless Butcher. With no cards in his graveyard, Jonsson threw away his Engulfing Flames to let Rotting Giant attack, bringing Davis down to seven points.

Davis played nothing on the following turn. Jonsson did not pitch another card, attacking with a Butcher and a pair of Outcasts. Davis cast Sonic Seizure on the Butcher, getting back a surprise blocker to take out one of the Outcasts. Although he was down to five life now, the game was looking far better for Davis suddenly. Firebolt took out the second Outcast while Jonsson could add nothing better to the table than Pitchstone Wall.

Having stabilized the board, Davis was now looking for ways to start dealing damage to his opponent before Jonsson could find/cast Caustic Tar. He cast Acceptable Losses at the Rotting Giant going up to five cards in his graveyard and getting ever closer to threshold. On the following turn, Davis cycled a Shelter on the Zealot, then cast Reckless Charge on it getting up to seven cards in the graveyard and attacked for six. He summoned a flying Mystic Visionary as well, while Jonsson cast a second Pitchstone Wall.

When Davis attacked on the following turn, Jonsson cast Temporary Insanity on the Visionary, to chump-block Mystic Zealot with. He did not realize however, that he had no threshold – thus Visionary took a short vacation on Jonsson's side of the table, watching the Zealot fly over its head for more damage. Davis used Pardic Arsonist to kill Braids and dropped yet another Visionary, making it virtually impossible for Jonsson recover. Davis ended the game after another attack, as Jonsson drew more lands.

Hands down, the worst card in Davis' deck is Crazed Firecat. However, it seems to have found its place in life. Three times Davis cast Sonic Seizure during the course of the match – like clockwork, Crazed Firecat was ready, getting discarded. What possible better use is there for it?