Quarterfinals: "Are You Excited?" 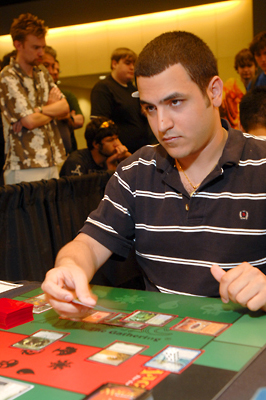 Shaheen Soorani stares intently.If the name Shaheen Soorani sounds familiar to you, don't be surprised. In addition to finishing in 9th place at the 2006 World Championships, Shaheen has been credited for creating such decks as Blink Riders and Greater Good Combo. Sam Black is no slouch either. The Madison, Wisconsin native is a long time gamer and managed to leave victorious at the Win a Car tournament held at Worlds this past December.

"Are you excited?" Soorani asked his mild-mannered opponent. Sam Black simply shrugged, unwilling to give away any information about how he felt.

Shaheen won the die roll but started out on a mulligan. He kept his six and watched happily as his opponent kept things fair by sending his opener back as well. The players got the game underway by accelerating out their manabases, Black in the form of a Boreal Druid and Soorani in the form of Rampant Growth. A Firespout from Soorani cleared Sam Black's board, but he followed up with a Treetop Village and a 2/3 Tarmogoyf, still strongly in the game.

With a clock presented to him, Shaheen Soorani maneuvered to stop his opponent's beatdown. With Sam's Tarmogoyf and Treetop in the red zone, Shaheen played a Cloudthresher as a surprise blocker. Sam let it resolve, then used a Slaughter Pact to keep it from munching any of his attackers. After combat things stood 18-7 in Sam's favor, and he placed a counter on top of his deck to remind him to pay for his Slaughter Pact.

"It is optional, you know," encouraged his opponent, unhelpfully. "You could opt not to pay..."

Sam failed to forget his Pact and when he had a Nameless Inversion for his opponent's chump blocker Treetop Village, Black took the first game of the match down.

"I've never liked my Game 1 against you," Shaheen Soorani informed his opponent, indicating that by "you" he meant "Green-Black Elves," not specifically Sam Black.

"I have no idea what Game 1 is like against you," Sam responded. "I didn't bother testing Game 1s."

Shaheen repeated his mulligan from the first game, cursing his luck at having opened a "sick" one-land hand with Rampant Growth, but unwilling to take a chance on missing a land drop before playing the sorcery. This time Sam Black didn't oblige by copying his opponent, and stayed on the full seven.

Two Ancestral Visions hit the suspend zone for Shaheen Soorani, but Black didn't seem fazed, making a Chameleon Colossus to go alongside his Treetop Village and Llanowar Elves. Soorani's follow-up Kitchen Finks promised to buy him some time to see the extra cards from the Visions, but he opted not to block his opponent's Colossus, taking 8 as Sam doubled its power and toughness.

A Sower of Temptation served as a temporary solution to the Colossus, inviting it over to Soorani's side of the table, but he still had a gradually growing Elf army to worry about. Soorani's double Ancestral Visions finally resolved, and he grew excited at the prospect of having a lot of gas for his turn. He quickly made a Firespout to wipe his opponent's side of the board, but Sam had a surprise waiting in the wings: Sudden Spoiling. The Time Spiral rare ensured all of Soorani's creatures would die as well, and Shaheen looked a little surprised to see the play. He made a second Kitchen Finks, his first now dead, and passed the turn to his opponent.

Sam Black used a Thoughtseize to reduce the power of his opponent's plentiful hand, but couldn't believe the amount of good cards he saw. After considering his fate for a few moments, he decided to scoop instead of try to battle through a bevy of Cryptic Commands, Ancestral Vision, Sowers of Temptation, and removal. 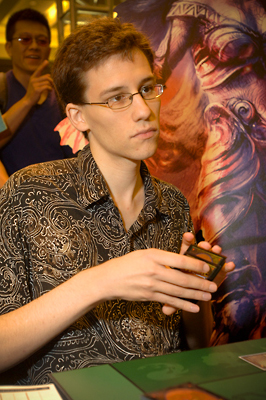 Sam Black gives up nothing."You ready for the epic fifth game coming up?" the talkative Soorani teased his opponent. Sam simply smiled knowingly, then sent his opener back for a grip of six cards. Both players commented on the number of mulligans in the matchup, then laughed when Soorani had to send his opener back for the third game in a row.

As Shaheen shuffled, he laughed about his deck. "The Top 8 lists should come with mods. 'Do not play this deck with Rampant Growth; play Into the North.' Also, Teferi is awful."

The two players got the third game of the match underway and Sam Black led with a Llanowar Elves into Tarmogoyf. What he didn't have was a second land, awkwardly joking with his opponent about keeping a one lander. Soorani quickly jumped out to three lands on the back of a Rampant Growth, though he alluded to the spectators that he had kept a one land hand himself and had simply drawn out of it.

Shaheen used a Firespout to wipe most of his opponent's board, then suspended an Ancestral Vision. Black didn't seem fazed, using two Thoughtseizes to nab his opponent's creatures in the form of a Chameleon Colossus and Tarmogoyf. Soorani, his hand empty, suspended a second Ancestral Vision and watched as his opponent struggled to find a third land. When Black finally managed to do so, he was able to add to his board with an Imperious Perfect. He also used a Thoughtseize to thin his opponent's hand after the first Ancestral Vision, and Shaheen triumphantly flopped his hand on the table to reveal he had drawn three lands, none of which were legal targets for the black sorcery.

"I don't know why I'm happy about that," Shaheen admitted, sheepishly.

His second Visions netted him a Chameleon Colossus, but Black was able to deal with that on the back of a Sudden Spoiling. The techy rare was perfect for dealing with protection from black creatures. With Soorani at 11 life, Black attacked with two Elf tokens, a 2/1 Kitchen Finks, and a Mutavault. Soorani's only blocker was an activated Treetop Village as Sam used Slaughter Pact to kill Shaheen's Tarmogoyf. Kitchen Finks was munched by the creature-land and Soorani fell to 4 staring down a Mutavault, active Imperious Perfect, and soon to be three Elf tokens. When he made no play on his turn and his opponent remembered to pay for his Pact before sending all of his team in for an alpha strike, Soorani dejectedly revealed his hand: four more lands.

Sam Black looked around in a concerned fashion while shuffling for the fourth game of his match. Calling the judge, he tried to stammer out a question but stopped himself. "I'll just make this easy," he said, turning to Shaheen. "If I win this, can I use your deck lists? I left mine in my car." Shaheen smiled and reassured the Wisconsinite that he could, indeed, use Shaheen's copies of the Top 8 deck lists if Sam managed to squeak on to the finals.

Game 4
The players copied their game plans from the first game with Sam Black accelerating using an Elf (this time of the Llanowar clan) and Soorani benefitting from a timely Rampant Growth. A Civic Wayfinder made sure Sam would stay gassed up with lands as he found himself a Swamp. Shaheen was content to simply play a Chameleon Colossus before passing the turn.

Sam echoed his opponent's Colossus by playing one of his own, but could only watch as two Tarmogoyfs and an Ancestral Vision on suspend joined his opponent's side of the board. If he had managed to find himself a Sudden Spoiling he could trump; otherwise, things were starting to look bad for Sam. 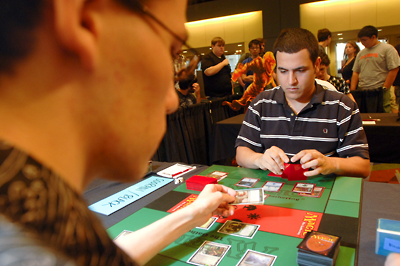 Soorani has a Vision of victory, but Black proves it's just a mirage.Black then made an attack which left his opponent at 12, then played Wren's Run Vanquisher exclaiming, "Do not get the member's discount!" Without an Elf in his hand, or perhaps not willing to reveal which Elves if any he did have in his hand, Sam had been forced to pay the full five mana for the 3/3.

Black attacked again, and the Colossuses traded in combat, but Soorani, afraid of a possible Sudden Spoiling from his opponent, refused to risk losing his Tarmogoyfs by blocking with those as well and fell to 6. An attack on the following turn left him at 4, but cleared his opponent of most of his attackers, costing Shaheen a single Treetop Village. An Ancestral Vision ticked down to just one counter for him, but he was well within range of a lethal Profane Command from his opponent.

Kitchen Finks provided Sam Black with a hard-to-kill creature and some life, leaving things at 14-4. Shaheen's Ancestral Vision finally resolved but didn't appear to provide him with much action as he simply made a Coalition Relic and passed, unable to attack because of his opponent's re-arming. A Slaughter Pact took out Shaheen's last remaining Tarmogoyf, and when Sam attacked with a Treetop Village and Kitchen Finks he was able to reveal a Sudden Spoiling to hit both of Soorani's Treetop Village chump blockers.

It looked like Shaheen would have just one more turn to live unless he had a Cryptic Command, but Sam Black was allowed to turn his creatures sideways and attack. Shaheen pushed a Kitchen Finks in front of a Treetop Village, realized his Nationals road had come to an end, and extended his hand in defeat.

Sam Black defeats Shaheen Soorani 3-1 and advances to the Semifinals!