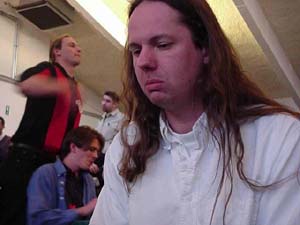 Arjan van LeeuwenThis quarterfinal pits two fairly unknown players against each other. Arjan is famous amongst his Dutch peers for his amazing ability to come in second at Pro Tour Qualifiers and he´s been to a couple of Pro Tours as well. Wolfgang is known for making top 8 at the last two European Championships and his innovative deck-building.

Both players are playing base blue/white control decks and they´re both splashing their rare bombs: Stalking Bloodsucker for Wolfgang and Mystic Enforcer for Arjan. Wolfgang´s splash is more than just his rare though, he´s also playing black for a pair of Mesmeric Fiends who could prove to be key in this matchup as Arjan has no way of removing them.

Arjan kicked off with a turn two Patrol Hound off of two Plains. Those two Plains turned out to be his only lands as Wolfgang´s Mesmeric Fiend saw a lot of spells but no mana to cast them yet. Wolfgang decided to trust Arjan´s land drawing skills and took Mystic Zealot over Pilgrim of Virtue.

Arjan then drew another Plains and cast two Pilgrims over the next two turns. Wolfgang played another Fiend taking Embolden and a Looter and things started to look really grim for Arjan.

Although Arjan tried hard to put up some kind of offence, his three Plains just weren´t cutting it against Wolfgang´s Looter-improved hand and it was just a matter of time before Arjan succumbed to Wolfgang´s overwhelming card advantage. A Stalking Bloodsucker dealt the final points. 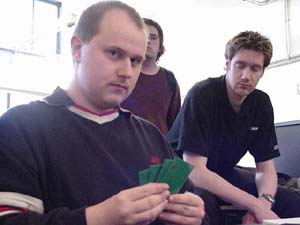 Wolfgang Eder Eder was the aggressive player this time as he came out strong with a Patrol Hound and a Mystic Visionary. His start didn't do much good though as Arjan played a Pilgrim of Virtue and a Treetop Sentinel to stop the beatdown. Eder tried to push some more damage through with a Spirit Flare but a Hydromorph Guardian from Arjan put an end to that too. It looked like this game would be decided on card advantage once again.

Arjan blinked first, playing a Looter and a Mystic Enforcer that promised to become a 6/6 flier very quick. Once Arjan hit threshold he attacked with his Enforcer in only to have it send farming by an Eder Second Thoughts. All my hopes for a quick end were dashed as the players settled into their draw-go routine. Well, make that a draw-draw-discard for Arjan as he was using his Looter to find one of his two Zealots or his Turbulent Dreams to get through Wolfgang´s wall of creatures.

Wolfgang drew his Bloodsucker first though and decided to play it right away only to get it countered by a Looter-enabled Circular Logic. At this point Arjan was in real danger of getting decked as multiple Looter activations left him with about 10 cards left in his library.

Arjan tried very hard to win the game with the first few turns left to him, but not even a seven-point Turbulent Dreams would get enough damage through to win him the game before running out of cards.