Quarterfinals: Back Against the Wall

Welcome to the best-dressed Quarterfinal in this Pro Tour–Honolulu Top 8. Brian Kibler, in his jacket and Superman t-shirt, if anything looked less smart than Conley Woods, who had a crisp white shirt to go with his own suit jacket. The last time that Kibler was under the Sunday lights at a Pro Tour was in 2001, before Woods had even started playing. He seemed pretty pleased to be back. 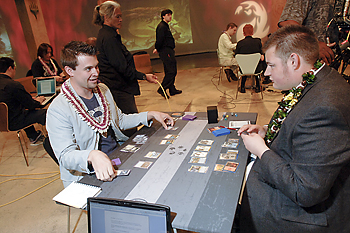 “Oh, they did,” replied Woods. “They’re pretty good against a mull to five, too.”

Kibler on the play had indeed gone down to five cards, and led with a Mistvein Borderpost. Conley Woods had a five-colour special, leading off with a cycled Valley Rannet and a cycled Pale Recluse which met a raised eyebrow from Kibler.

It was Kibler who had the first creature of the game, with Aven Trailblazer.

“I really hope you just say go,” he said. “That would be awesome.”

Kibler bashed in with his 2/1 Trailblazer, which had only Plains to pump it, before cycling Gleam of Resistance to find a Swamp. Woods had a Volcanic Submersion to destroy Mistvein Borderpost.

“What a jerk!” exclaimed Kibler. “It’s kind of rude to destroy your opponent’s mana when he double mulliganed!”

Kibler was on fine form and kept bashing in with his Aven Trailblazer, and played a Kaleidostone. When Kibler saw a Paragon of the Amesha, he looked a little concerned. Woods was just one colour off being able to make that 2/2 big and special, prompting Kibler to go for it with a Drag Down.

Woods went down to 12 from attacks, and finally bit with a Branching Bolt to clear the board of creatures. He cycled a second Pale Recluse to keep playing lands, and finally played a creature in Grixis Slavedriver. Ridge Rannet was next up from Woods. This drew a laugh from Kibler, who was suddenly in trouble.

Kibler cracked his Kaleidostone to be able to play Arsenal Thresher, and revealed Esperzoa, Executioner’s Capsule, and Sludge Strider. He took a point of mana burn, and looked on dejectedly as Crystallisation stopped his threat. Kibler dropped to 5 on attacks, but had a Wall of Denial and that Executioner’s Capsule the following turn. Could he get back in this game?

Woods attacked in with his creatures, and followed up with a Lavalanche for the final points. Kibler wrote LAVALANCHE in large letters on his scorepad, murmuring to himself that had his Borderpost stayed around, he might have still won the game. 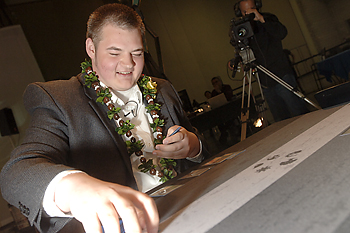 All smiles.For the second game, Kibler chose to draw, having seen that Woods’s deck was not exactly quick on the beatdown and surely wanting to avoid being down a significant number of cards, as had been seen in Game 1.

This game neither player had a mulligan, and it was Woods who led with Mistvein Borderpost. Woods began his cycling on turn two, fetching a Plains with Pale Recluse.

“I would like to go aggro on you,” declared Woods as he cast a Parasitic Strix. He was slowed down, though, by a Wall of Denial from Kibler, who had a 4/4 Arsenal Thresher to follow up (revealing Sanctum Plowbeast and Sludge Strider).

Woods continued to cycle, this time with Fiery Fall to fetch an Island. This allowed a Fire-Field Ogre. Kibler proudly cast a Frontline Sage, and attacked past the 4/2 first-striker with a now 5/5 Arsenal Thresher.

While Woods played a Grixis Slavedriver, Kibler used his Frontline Sage to find a second Wall of Denial, declaring a state of lockdown. His next play was Scepter of Dominance, and Kibler proudly stated that he was playing a Prison deck.

Paragon of the Amesha came from Woods, who was still stuck, unable to attack in the face of those Wall of Denials. Filigree Sages came next from Kibler, to form a nice little combo with his Scepter.

Woods was not impressed. “Wow, for 36 mana you can tap down two dudes! Nice.”

Kibler tapped down Woods’s Fire-Field Ogre, before Woods ran in with his team. Woods lost Paragon of the Amesha in this fight, but followed up with Caldera Hellion, who became a 5/5, and cleared out all of Kibler’s non-Wall creatures.

Kibler played Scornful Æther-Lich, a win condition in an otherwise locked up board.

“Hooray! Look who it is!” said Kibler on his next draw. “Basic Swamp, my good buddy.” Late to the party, the Swamp did make for Sludge Strider for Kibler.

“You can concede any time you want,” Woods said.

It was Woods who was on the back foot in this game, unable to attack, and gradually watching Kibler’s board position improve. Executioner’s Capsule came down, and Kibler drained Woods using Sludge Strider. Kibler did not drain the following turn when he played Kaleidostone.

When Woods tried for a Fleshformer (which he had full domain to activate), it met Soul Manipulation from Kibler, who countered the creature and fetched back an Arsenal Thresher. A Molten Frame killed off Sludge Strider, and the game rumbled on.

Kibler’s next play threatened to change the face of the game a little. Esperzoa gave Kibler attacking options, plus card drawing thanks to Kaleidostone. This prompted Woods to pull the trigger with Branching Bolt, killing off both the flyer and a less scary Bant Sureblade.

Again Kibler struck back, using Oblivion Ring on Grixis Slavedriver. Now it was time for Kibler to start attacking. He had a Deft Duelist that could now profitably attack, and did so, to take Woods to 12. The problem, though, was that Woods had been merrily building up a land base, and could pull back at any moment with Lavalanche.

A Grixis Charm from Woods tried to put Oblivion Ring back in Kibler’s hand, but Kibler had a Traumatic Visions to stop it. He would now be open to Lavalanche if it was there. In the meantime though, Kibler was on the beatdown, taking Woods first to 8, then to 4.

“Not Lavalanche,” begged Kibler as he surveyed the draws from Woods, looking for the final points. He didn’t see the powerful rare, but was thoroughly nonplussed by first Pale Recluse, then Wall of Denial, then Ridge Rannet.

Now Kibler could not attack, and Woods was safe to draw into and play his bomb. This he did, and a colossal Lavalanche finished the game.

From here, Kibler would have to win three games straight to keep his Pro Tour dream alive. This was the first match where he had not been seen listening to his “power song” of the tournament, “Smashing the Opponent” by Infected Mushrooms. This match he was not smashing, and the Superman t-shirt that he was wearing did not seem to make him indestructible. 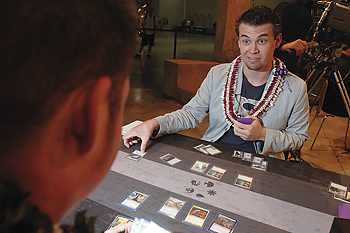 All eyebrows.Kibler elected to draw again, and he had the first threat of the game in Deft Duelist. This was matched by Paragon of the Amesha from Woods, which did not block. Kibler had a Scepter of Dominance to follow, and used it to keep some of Woods’s mana locked down. This didn’t stop Wall of Denial coming down for Woods, though, to make for another exciting,fast-paced game. Kibler also had a Wall of Denial, but as and when Woods got up to domain, his Paragon of the Amesha would at least be able to run into it for lifegain each turn. Woods used Volcanic Submersion to get rid of Scepter of Dominance.

A Brainbite from Kibler took Caldera Hellion over Dark Temper and Fleshformer. Woods then drew for his turn and found a Pale Recluse that made it straight into play. Still a Swamp short of Domain, Woods’s Paragon was not super scary, and an Executioner’s Capsule came down from Kibler to ensure that Pale Recluse wasn’t too scary either. The following turn, Kibler killed off Pale Recluse with the Capsule and traded his Duelist for Paragon. He cast Scornful Æther-Lich, which was soon killed off by Dark Temper.

The board was not keeping permanents particularly well, but Kibler seemed to edge in front, casting Kiss of the Amesha to go above 20, and draw some cards. He had a Call to Heel to keep Aven Trailblazer from dying to more removal from Woods, and to draw yet more cards.

With Aven Trailblazer and a Bant Sureblade, Kibler was able to get aggressive, pushing one creature per turn past Wall of Denial, nibbling away at Woods’s life total. He had a Soul Manipulation to stop a Pale Recluse, and get back Scornful Æther-Lich, and continued on his attacks to take Woods to 10.

At this point Kibler was being careful to keep five mana up at all times. He at least wanted to threaten having a counter for Lavalanche, but as Woods’s life total dropped, he reached a point where he would have to go for it. Woods played a Grixis Slavemaster, but Kibler now had Esperzoa too.

Woods did not have the Lavalanche this game, and Kibler’s attackers were good enough to end the third game.

After Game 3, Kibler confided that he had in fact listened to his song before the match. Sneaky, sneaky.

For the fourth game, it was Woods who chose to draw.

“Interesting strategy ....” said Kibler. “Where did you get that one from?”

Both players kept, and each led with Mistvein Borderpost. Kibler had the hot follow-up, with Bant Sureblade, allowing for an attack for 3 on turn three. Kaleidostone followed for Kibler, who watched on as Pale Recluse found a Forest for Woods.

Parasitic Strix drained Kibler for 2, meaning that both players had got full value from their Borderposts. Woods tried for a Canyon Minotaur, but was thwarted by Soul Manipulation.

After three slow games, the fourth looked like a race, and Crystallization from Woods put him ahead in that race. He had Fiery Fall to stop a Filigree Sages from Kibler, and soon had Kibler at 10 thanks to his 2/2 flyer. Ridge Rannet came from Woods, but he was left disappointed by a Brainbite taking his Lavalanche (also revealing Resounding Scream), and a Wall of Denial slowing his attacks.

Woods played Pale Recluse, looking to break through, and cycled his Resounding Scream, only to hit a pair of lands. He was building up creatures, though, while Kibler was not seeing a lot of action.

Woods continued to play threats while Kibler was drawing lands. After just a few more turns of beatdown, it was all over. 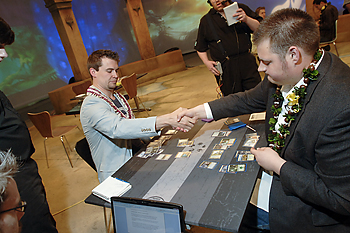 Conley Woods defeats Brian Kibler 3–1 and advances to the Semifinals!

1 Kiss of the Amesha

1 Paragon of the Amesha