World Championships appear to be Ryo Ogura's forte, as the 22 year old Nagoya Pro sealed his second Pro Tour Top 8 this weekend, both of which have come at the World Championships. Ogura started his week by defeating newly enshrined Hall of Famer Bob Maher and ended his run to the Top 8 by defeating one of the hottest players in the World in Willy Edel, though he did lose to doppelganger and fellow Top 8 member Tiago Chan along the way. He'll be looking to better his 2004 Worlds Top 8 appearance by making it out of the quarterfinals.

Sitting across from Ogura is 20-year-old Portuguese rookie Paulo Carvalho. This is Carvalho's first Pro Tour appearance, and he's here by virtue of finishing third at Portuguese Nationals. The Portuguese team finished one win short of playing on Sunday, but they are certainly cheering on Carvalho in his quest to join Jan-Moritz Merkel and make it back-to-back rookie Pro Tour winners. The deck matchup here pits Ogura's blue-white Tron deck designed by Katsuhiro Mori against Carvalho's updated version of red-green Heezy Street, a deck Carvalho said he chose because he was hoping to meet Tron decks.

Carvalho had to mulligan to five to start Game 1 and then kept about the slowest draw imaginable, as he started chucking burn directly at Ogura's head on turn 3 because he had no creatures. A Tin Street Hooligan on turn five with three land in play met a Spell Snare, and then Giant Solifuge fiddled with Remand and a full Tron on the board from Ogura before finally being dispatched by Spell Burst with buyback. Seeing the full lock, Carvalho packed 'em up, knowing he had no way to get past the counter.

Carvalho again went reaching for his library after drawing his opening hand, his head slumping dramatically as the set of six did not meet his standards either. It must be a miserable feeling to get this far in a Pro Tour and then have your deck not even give you a chance to play a game of Magic before forcing you to stare 0-2 in the eye. 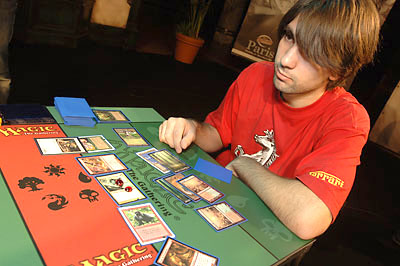 Paulo Carvalho, a rookie taking a shot at the Championship.

Carvalho started well off of five with a pair of enhanced Kird Apes hitting the board on turns one and two. Tin Street Hooligan on turn four ate a Mana Leak, and now it was up to Ogura to staunch the bleeding, since he had made it past the crucial early turns without too much trouble. Knowing that Carvalho's hand was depleted from the mulligans, Wrath of God made that task easy. A 1/1 Scab-Clan Mauler from Carvalho showed just how rough things were, while Ogura assembled the 'tron on turn 5, and drew seven cards a turn later with Tidings and Compulsive Research. Giant Solifuge and the Mauler knocked Ogura to 7, but then Circle of Protection: Red essentially dispatched the danger by itself, though the game continued for some time until Ogura again showed Spell Burst with buyback.

Carvalho finally kept a seven-card hand but had no first-turn drop, running a Kird Ape out on the second turn with a shake of his head. The Ape got rowdy on turn three, but Carvalho whiffed on playing a creature, though there was some consolation in the fact that Ogura had no Signets in play on his side either. Char to the head at the end of Ogura's turn Leaked away, but that left Ogura open to Stone Rain on his Hallowed Fountain. Ogura finally cast a Signet, but Naturalize during his upkeep left him on the brink of death. However, Faith's Fetters on Llanowar Elf and then Circle of Protection: Red were certainly making a game of things. With Ogura at 3, Carvalho cast Magus of the Scroll, dialing up the tension one more degree and forcing Ogura into deep consideration before every play. Was this a trap he could escape, or would the flames and the beats result in a red death and shuffling up for Game 4? 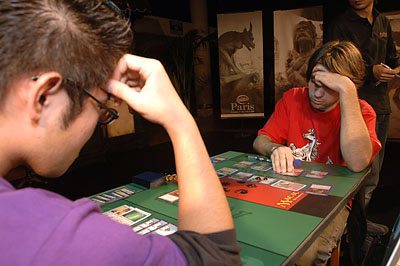 Funny, I didn't think this was a mirror match.

The final 'tron piece meant that Ogura had no worries from red damage without a sudden appearance from Naturalize, but now Ryo had to pay attention to damage from his own lands - he no longer had a damage-free source of colored mana. Compulsive Research dug up a Hallowed Fountain, and then Triskavelus a turn later made it look like Ogura had finally escaped from the bring of disaster - until he made a mistake. The turn he cast the Triscuit, he tried to kill Carvalho's Magus of the Scroll but forgot about Pendelhaven, losing a second counter off the robot and then watching it die in combat during Carvalho's attack.

After the attack, Call of the Herd finally answered the phone and made its first appearance of the match on Carvalho's side, again putting Ogura to the test. Generating white mana for Wrath of God dropped Ogura to 1, but after Carvalho's reload, he was facing two green creatures with only an Assembly Worker and an untapped Urza's Factory for protection. Pendlehaven made sure the both Workers died at no cost to Carvalho, but Ogura finally had two painless white sources on play, and Ogura was able to Wrath again. That Wrath was the straw that broke the Gruul's back, and when Ogura was able to show Spell Burst with buyback on Carvalho's Tin Street Hooligan, the young Portuguese player packed it in again, the victim of more than his fair share of bad luck... with buyback.

Ryo Ogura proceeds to the semifinals!