Quarterfinals: Battle of the Biggies

Koutarou Ootsuka, a Japanese player with a great deal of GP experience, came into the Quarterfinals with a deck that wasn't exactly what he wanted – it had a ton of power, especially with Drana, Kalastria Bloodchief and Pestilence Demon, but it lacked consistency with its three colors and its mini-aura theme with few auras to be found.

His opponent, young Andrea Giarola from Italy, was not quite as young on Sunday: it was his 18th birthday. Despite being cut on red-green from his left, Giarola's deck ended up quite strong as a token producing, fatty-making machine.

Giarola won the roll and led with two Forests and a Nest Invader. Ootsuka had no plays and began to take the beats, down to 18 from the first nest invasion. The Spawn kept coming with a Growth Spasm next for the Italian. Ootsuka's first play, a Dawnglare Invoker, did not look to be blocking anytime soon since Giarola sacrificed his Spawn and tapped all of his lands for a mighty turn four Pelakka Wurm. 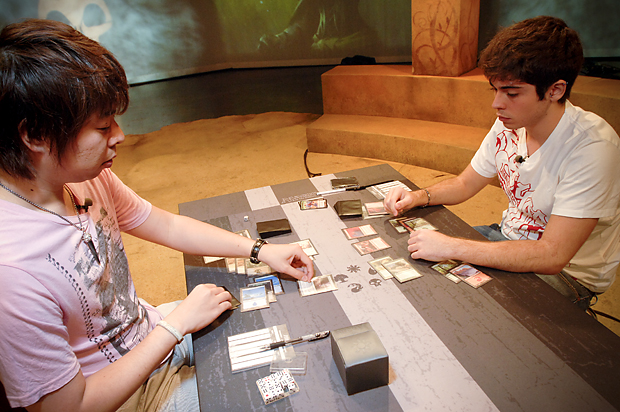 Koutarou Ootsuka and Andrea Giarola are their respective countries' sole representatives in the Top 8.

Ootsuka had a racing plan in mind, suiting up the Invoker with a Luminous Wake and taking it to 25-20, his opponent's advantage. The Wurm and its nest-invading pal came across for 11, and then Rage Nimbus landed for Giarola. The Nimbus required the Invoker to attack but Ootsuka had an Eel Umbra post-blockers to save the Invoker when it was blocked by the 5/3 defender.

In chunks of 4 life, Ootsuka continued to keep pace with the massive assault from Giarola, and he even added in a Survival Cache to jump back up to 14 to Giarola's 25. The Italian added Vent Sentinel and Battle Rampart to his board. When Warmonger's Chariot became attached to the Battle Rampart and the Italian attacked with the team with Vent Sentinel waiting in the wings, he had his opponent for exactsies.

Ootsuka was first on the board in the second with a Halimar Wavewatch, an excellent way to hold the ground against Giarola's green (non-Pelakka Wurm) monsters. Giarola had only a Warmonger's Chariot and Ootsuka started leveling the Wavewatch. On turn five, after Giarola had deployed a Battle-Rattle Shaman, it achieved 6/6 islandwalking status. The subsequent bash brought the life totals to 20-14 in his favor.

Giarola's first Shaman was joined by a second copy, however, and the Italian evened it up at 14 apiece. Ootsuka's second attack with the fully-leveled Wavewatch brought his opponent down to 8, and then he cast Totem-Guide Hartebeest to fetch a Mammoth Umbra. 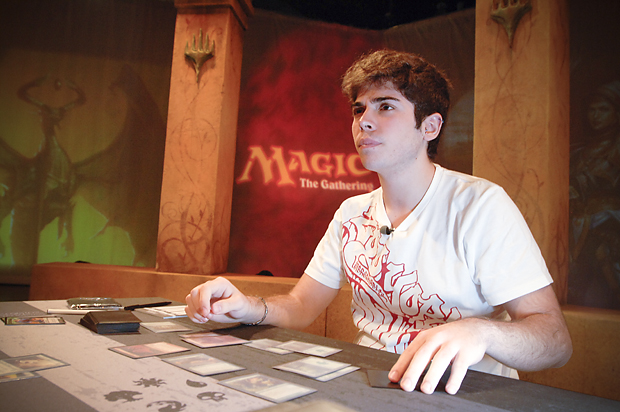 Giarola fights in the arena, a modern-day gladiator.

Giarola could do little but equip his Shaman and bash in for 8, which elicited a chump-block by the Hartebeest. The Wavewatch became a veritable Mammoth and swung in for a potential 9 damage. Giarola had a mid-combat Spawning Breath to the face for a chump-blocker of his own.

Again, the Pelakka Wurm arrived on Giarola's side of the table. Ootsuka wasn't finished upgrading his monstrous Merfolk, however – a Luminous Wake was added, and the attack brought Ootsuka up to 17. Giarola decided to double-block with the equipped Shaman and the Wurm, but mid-combat Induce Despair revealing another Hartebeest meant the two blockers would be dying for nothing and the Wavewatch would remain in control of the game.

When Ootsuka then cast the Hartebeest and fetched an Eel Umbra with enough mana to protect his threat, Giarola conceded.

The battle was rejoined with mana fixers on both sides of the field, a Prophetic Prism for Ootsuka and a Growth Spasm for Giarola. The Japanese player one-upped the fight with a Sea Gate Oracle.

Giarola decided his route to card advantage would be killing his opponent's creatures, so he plopped down a Rage Nimbus and forced the Oracle to fight. Ootsuka seemed okay with that, following up the slaughter of the Oracle with a Last Kiss to kill the Nimbus.

The Italian player added a Battle-Rattle Shaman to give his little Spawn a slight upgrade. The life totals once again returned to 20 each, and stayed that way when the Japanese player's newly cast Dawnglare Invoker traded with Giarola's Battle-Rattle Shaman.

Giarola increased his Spawn output with an Emrakul's Hatcher, and when Ootsuka didn't seem to have anything he also added an Overgrown Battlement and a Soulsurge Elemental. The Elemental, at a first-striking 6/1, looked a bit fierce so Ootsuka took it down with Induce Despair. His revealed card, Kor Spiritdancer, was next onto the battlefield. 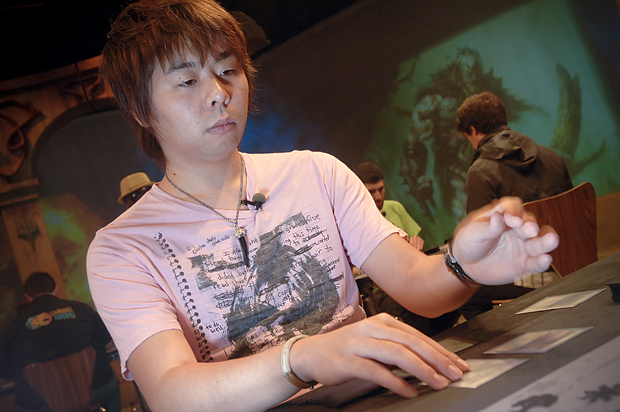 Ootsuka fights on in an arena filled with fellow warriors.

Giarola just untapped, sacrificed all but one Spawn, and summoned an Ulamog's Crusher. Ootsuka had a Totem-Guide Hartebeest for Eel Umbra and a lot of card advantage, but the Crusher rumbled over and forced an annihilation. Rather than lose any lands, Ootsuka tossed his Totem-Guide Hartebeest and Prophetic Prism in the bin. Giarola just cast a Wildheart Invoker and passed.

The reason for the choice of sacrifice became clear on Ootsuka's turn: he had an Artisan of Kozilek. He returned Dawnglare Invoker to the battlefield and was ready to block with his Spiritdancer when the Crusher again attacked. With his opponent at 14, Giarola opted not to pump the Crusher to 13-power trample levels, just smashing the lowly 0/2 into oblivion. Ootsuka looked to be safe behind the eight mana of his Invoker, and passed.

Unfortunately, Giarola had the Spawning Breath on end step and without additional mana, even if Koutarou saved the Invoker, he wouldn't have enough blockers to live through the next combat.

A turn-two Overgrown Battlement looked to speed things up considerably for Giarola, but Ootsuka was having none of that using Induce Despair to kill it. Giarola continued to build up with his Wildheart Invoker and his Battle-Rattle Shaman, but Ootsuka reached five mana and was able to cast his revealed creature card: Drana, Kalastria Bloodchief.

Drana proceeded to kill off Giarola's army and also took chunks out of Giarola's life total, but a just-in-time Pelakka Wurm seemed to be pulling him back into the game, returning him to 12 life. Without enough mana to straight up kill the Wurm, Drana played the role of Air Elemental and took Giarola down to 8.

With Ootsuka still at 10, Giarola's Wurm wasn't sufficient to stop the pseudo-firebreathing flyer, and the match went to the deciding game.

Giarola again had a turn two Overgrown Battlement, doing what his deck did well: accelerate. Ootsuka again had his Halimar Wavewatch. Giarola summoned a Soulsurge Elemental, not looking too tough at 2/1 but soon to grow when its Spawn buddies arrived.

Ootsuka took the breathing room to cast Survival Cache, going up to 22 and drawing a card. Giarola would have none of that, however, and made a Kozilek's Predator. Next turn, the Italian made a Wildheart Invoker and the now 6/1 Elemental surged in and took Ootsuka to 16.

The Japanese player tried to stabilize, leveling his Wavewatch and enchanting it with an Eland Umbra. With a lot of power on the other side of the battlefield, Ootsuka then brought out the big guns: Drana. Unfortunately for him and his chances of retaining her services, Giarola had the only card in his pool capable of taking her out, a Heat Ray for 4. The Italian's attack brought his opponent to 9. 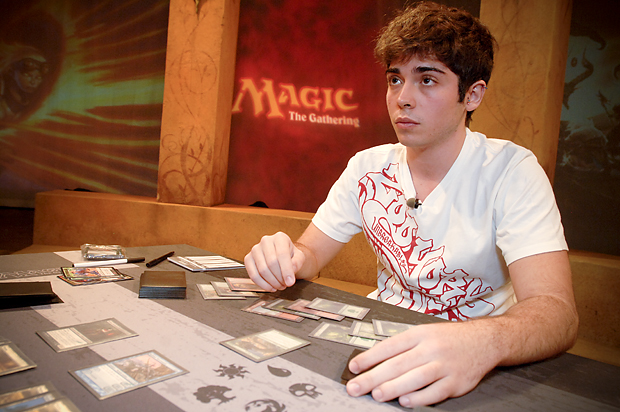 Ootsuka lunges, but Giarola has the parry.

Despite reinforcing with an Ikiral Outrider, Ootsuka could not stop Giarola's dominating board presence. A Battle-Rattle Shaman made it possible for one of the Spawn to attack. Now with four attackers to his opponent's two blockers, he revealed his Might of the Masses post-blockers and Ootsuka extended the hand.

Andrea Giarola defeats Koutarou Ootsuka 3-2 and advances to the Semifinals!