All weekend, I've heard that this draft format is possibly the most skill-intensive Draft format we've seen in a while. If this Top 8 is anything to go by, I'd say that skill played a huge factor in these players' success. I mean, come on. Two Hall of Famers, one of whom is the only player to win two individual Limited PTs, two players who won PTs last year, including the last individual Limited PT. It's sick.

I had the pleasure of getting to sit down and watching Jon Finkel and Guillaume Wafo-Tapa square off yet again in the quarterfinals. I say yet again because this is the third time this weekend that these players have had the luxury of playing against each other. The previous two were both won by Finkel. Can he make it a clean sweep, or will Wafo-Tapa get his first win of the series at the most important time?

Finkel scored the first victory of this third and deciding match, the die roll, and chose to go first. 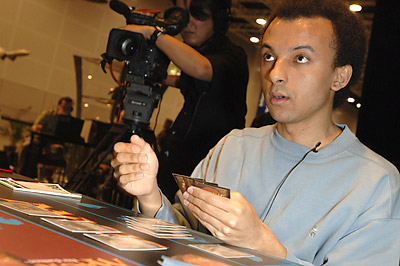 Guillaume Wafo-Tapa is unflappable. Finkel spent the early turns of the game amassing a "small" army, as Kithkin tend to do. Goldmeadow Harrier, Mosquito Guard, and a Preeminent Captain on consecutive turns looked to overrun Wafo-Tapa's empty board. Guillaume put a stop to any Captain shenanigans before they could start, though, with a Weight of Conscience.

Undisturbed, Finkel kept sending his little men in to whittle away at Wafo-Tapo's life total. He also played a Distant Melody naming Kithkin to replenish his hand with three new cards. With Finkel's Captain on lockdown, Wafo-Tapa managed to find a creature generator of his own in Stonybrook Schoolmaster. Finkel was ready for it, though, and used a Weight of Conscience of his own to remove the Schoolmaster before it could make any tokens.

Wafo-Tapa had a Plover Knight on the following turn which Finkel trumped with a Mulldrifter. Finkel was a little ahead on cards at this point, and definitely had more creatures, although none were as large as the Plovers. Finkel decided to let Wafo-Tapa send his Plover Knights in, as opposed to tapping them with his Harrier. In the position he was in, he'd much rather tap down a potential blocker. When Wafo-Tapa passed the turn back instead of playing one, finkel just shrugged in acceptance.

Next turn brought the pain, as two Kinsbaile Skirmishers hit play for Finkel, pumping his Mulldrifter and Mosquito Guard before he sent them barreling in. Wafo-Tapo had nothing, and just adjusted his life total down to 9. Even after Finkel passed the turn, Wafo-Tapo had no end of turn play. At this point, he had spent too many turns doing nothing, where Finkel had been actively using his mana every single turn. He was far enough behind at this point that he conceded after drawing his next card.

Based on how last game went, Wafo-Tapa was going to have to get a faster draw, or at least hope Finkel had a slower one, if he was going to pull this game out. Fortunately for him, Finkel was displeased with his opening seven, and decided he liked his chances better with a new six. Fewer cards means fewer little Kithkin to prick his life total away.

Wafo-Tapa got on the board early this game with a Silvergill Douser, but didn't have anything to go with it on his next turn. Finkel was forced to blow a Mulldrifter on his third turn to dig a little deeper into his deck. What he found was a Kithkin Zephyrnaut that he dropped into play on the next turn. Wafo-Tapa, not content with playing things on his turn, decided to play a Dewdrop Spy at the end of Finkel's turn.

Finkel's Zephyrnaut revealed a Preeminent Captain during his upkeep to take to the skies, and show an upcoming thorn in Wafo-Tapa's side. The Captain can get out of hand if he comes down early and isn't soon dealt with. Finkel used his five mana to drop the Captain and a Cenn's Heir into play. Wafo-Tapa decided to play yet another creature at the end of Finkel's turn, adding a Faerie Harbinger to his team. When he put an Inspired Sprite on top of his deck, it seemed that the flashy trend would continue.

This was where is got a bit absurd. Finkel played a Kinsbaile Skirmisher, pumping up his Preeminent Captain, and then sent his Captain in for its first attack alongside the Cenn's Heir. He used the Captain to put a second Skirmisher into play with the Cenn's Heir's ability on the stack. The Skirmisher pumped the (nonflying) Kithkin Zephyrnaut and ended up making his Cenn's Heir that much bigger. It was 12 power worth of creatures coming across the table. All Wafo-Tapa could do was play the Inspired Sprite and try to double block the Zephyrnaut with his Inspired Sprite and Dewdrop Spy. He used his Douser to shrink the Zephyrnaut, allowing his men to survive, but Finkel had the Coordinated Barrage to kill the Sprite before damage. The attack dropped Wafo-Tapa to 9 life and three creatures to Finkel's 14 and army of Kithkin.

Wafo-Tapa sighed and drew his card. All he could manage on his following turn was a Dreamspoiler Witches. Finkel, on the other hand, found a Kithkin Greatheart on the top of his library with his Zephyrnaut, which eventually made its way into play via the Captain. When Finkel played Distant Melody for six cards after combat, Wafo-Tapa packed this game in. 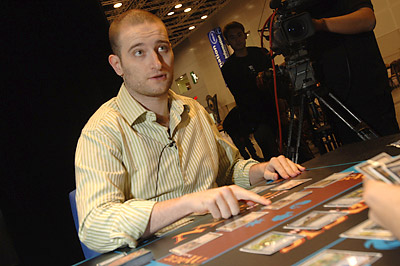 Jon Finkel has a point. Last game was a perfect example of the explosiveness Preeminent Captain can provide. Each turn, it gets you a free creature with haste, and that's incredibly hard to deal with, especially in a deck as aggressive as Finkel's.

Wafo-Tapa got to start the second game off with a Silvergill Douser again, and this time, Finkel gave him a second-turn Wizened Cenn to start using it on. Wafo-Tapa found a Stonybrook Schoolmaster on his third turn that would hopefully allow him to generate an army to rival the one Finkel's deck was capable of dropping on the table.

On his next turn, though, Wafo-Tapa was forced to use Research the Deeps looking for a land, but he found none, even after clashing. Finkel played a Pestermite at the end of Wafo-Tapa's turn and tapped the Douser. He untapped and dropped a Kithkin Zephyrnaut onto the table for another appearance and sent his Pestermite in for a little talk with Wafo-Tapa's score sheet.

Wafo-Tapa was still without a fourth land on turn five, and he was facing down an ever-growing army on the other side of the table. He did find a Weight of Conscience both to remove Finkel's Wizened Cenn and generate a Merfolk token via his Schoolmaster, but it would be a long road back without access to more mana.

Finkel wasn't going to let up either. His next turn brought a Cenn's Heir, as well as a Weight of Conscience to remove Wafo-Tapa's Douser. Now he had nothing to slow Finkel down, especially with no way to tap his Stonybrook Schoolmaster other than attacking. And attack he did, into a telegraphed Coordinated Barrage from Finkel, but Wafo-Tapa was ready with the Negate. Without a fourth land still, he had to get (and keep) his creatures however he could.

Next turn, Finkel played a Kithkin Harbinger setting up a Kinsbaile Balloonist, as well as putting a Kithkin on the top of his deck for his Zephyrnaut's Kinship. An attack from a large Zepgyrnaut and a Pestermite dropped Wafo-Tapa to a precarious 8 life.

The determined Stonybrook Schoolmaster attacked Finkel for another one and made another Merfolk token. Wafo-Tapa finally played a fourth land and passed the turn. Finkel pimped out his Zephyrnaut by virtue of the Ballonist he had placed on top of his deck, and he sent the wannabe Serra Angel and his Pestermite into the red zone. Wafo-Tapa played a Faerie Harbinger to block the Pestermite, and chose not to put anything on top of his deck. He was going to need some more land, and preferably a second Island if he was going to extend this match.

If Finkel managed to hit his kinship on the next turn, he'd have three flyers to cruise over Wafo-Tapa's team and deliver the final blows. When Wafo-Tapa played Research the Depths, Finkel got to put the Plains he had on top of his deck all the way on the bottom. Its replacement was another Plains, which left his Zephyrnauts grounded. Finkel decided to send only his Balloonist and Cenn's Heir at Wafo-Tapa. It was a lethal attack, but Wafo-Tapa had the Stream of Unconsciousness to survive another turn.

Wafo-Tapa attacked with his Schoolmaster and then finally reached enough lands to play an Æthersnipe, returning Finkel's Balloonist to his hand. The next turn would all come down to the top card of Finkel's deck and Kithkin Zephyrnaut's kinship trigger. He peeled it up slowly at the beginning of his upkeep and revealed... an Island. The Zephyrnauts would have to wait another turn. He simply replayed his Balloonist and passed the turn. When Wafo-Tapa played a second Æthersnipe on his following turn, it seemed we would be in for another suspenseful upkeep. He bashed in with his Æthersnipe and Schoolmaster, dropping Finkel to 14.

For the second time in as many turns, Finkel's ability to outright kill Wafo-Tapa hinged upon the top card of his library. Again, he peeled it off the deck like he was afraid of breaking it... and sighed when it was nothing of value. All he could do for yet another turn was replay the Balloonist and pass the turn.

By this point, Wafo-Tapa had generated a monstrous army of Merfolk thanks to repeated attacks from his Stonybrook Schoolmaster. He sent every creature he could into the red zone, electing to keep enough Merfolk back to block all of Finkel's ground creatures. This dropped Finkel to 5. Maybe there was hope after all. Most of his Merfolk had been crushed by the slightly larger Kithkin, but at least there was hope...

...especially considering that Finkel's kinship missed again! That left the Zephyrnauts in the hanger for another turn. However, when Finkel announced his attack, Wafo-Tapa didn't have a removal spell for the Balloonists, and they artificially inflated the Zephyrnauts for the final 2 points of damage. 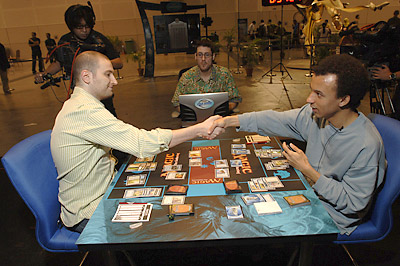