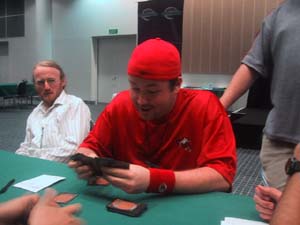 After winning the die roll Seck opened the game with a first turn Imagecrafter and looked to be in some real trouble when a Sparksmith hit the table on the other side. Seck had the answer however slamming down a Lavamancer's Skill onto his Imagecrafter and then pinging the smith before it becomes active. Hart had no real plays over his next few turns, trapped by the threat of the skilled up wizard.

Seck had no problems advancing his board, playing a nameless one and a Goblin Embermage. He then played a morph creature and an image crafter, slamming into Harts life total with his army of wizards and his swelling nameless one. Hart was forced to Erratic Explosion the Skilled Imagecrafter but it was too little too late as the morphed creature became an Aven and the wizards continued to beat Hart down

Hart got the game underway with a turn 1 Imagecrafter, which was traded with Seck's Imagecrafter on turn 2. The two players then spent their second turns cycling their Slipstream Eels, but the third turns of both players differed with Hart playing a Mistform Dreamer and Seck playing a morph creature. Hart continued to lay creatures playing down a Goblin Taskmaster and another morph creature. The two traded blows with morph creatures but it was Hart who got the upper hand playing a Sparksmith and then a Reckless One. With no way to deal with the Sparksmith Seck was helpless as the combination of two goblins with a third Mistform goblin if required was more than enough to take out his entire hand. He tried to stop the bleeding by casting a Pacifism on the giant Reckless One but it only held off his death for 2 turns. 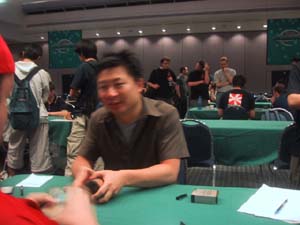 With the quarter final hanging in the balance Seck elected to play first playing the now familiar turn one Imagecrafter. Hart had a much different turn 1 however playing a Mountain and Fever Charming it. Hart then played a turn 2 Information Dealer and matched Seck's turn 3 Mistform Dreamer with one of his own. The two Dreamers traded blows for 2 turns until both players played Sage Avens to stop the attack phases dead in their tracks. Seck played his Callous Oppressor but Hart used his Information Dealer to manipulate an Erratic Explosion and kill it off then played the game breaking Sparksmith. Seck cycled away cards looking for some form of answer and attempted to buy himself some time with an Essence Fracture on the Sage Aven and the Sparksmith, but Mages Guile prevented the Sparky from being returned to Harts hand.

Things then began to get a little out of hand, already on 13 life Hart began to ping away at Seck's team, costing him lots of life as Seck's Mistform Dreamer became a goblin. When a Mistform Wall hit the table the Sparksmith was really carving into Harts life but he had finally regained control of the table on 6 life. Playing down a Future Sight he began to play card after card from the top of his library but Seck had one final trick up his sleeve. The large amounts of land Seck had drawn became useful as he summoned his flying 6/6 dragon into play. After all the Sparksmithing Hart was in real trouble, he dug deeper and deeper into his deck managing to find a Chain of Vapor to send it back to Seck's hand. He swung with his whole team and then Tethered it the next turn prepared to attack for lethal damage but Seck had a Tethers of his own, tapping down all Harts creatures. Once again Hart dug deeper and deeper attempting to find an answer to the 6/6 monster. He played a flying creature and prayed that Seck had no way to deal with it. Seck simply untapped, cast Oblation on it, sending it back into his deck and swung for the win