ou may recall John "Conrad" Kolos from last year's Nationals, when it seemed like he was a lock for the Top 8. The Philadelphia area player needed only one more win with several rounds to go but stumbled down the Standard stretch, including a banter-filled match with Antonino De Rosa that was turned into a comic strip. This was the third year that Conrad had earned a slot at Nats through his Regionals and this was the first year he had made it to Sunday.

Michael Jacob has had some modest success playing Magic, including a Top 8 turn at Grand Prix-Austin in 2005, but is much better known for his success at other card games. He is one of the top Vs. players in the world and earned close to $50,000 last year, but with that game rolling back its prize money he may be paying more attention to Magic. The Michigan-based player had a truly unique mono-green deck for this tournament, which the two players discussed while shuffling up.

"I didn't lose when he was on the board," Michael smiled until he was reminded of a game in the Swiss where his Trolls could not slog their way through a Story Circle. "That wasn't fun," he sighed. He changed the subject to address the long list of one-ofs in Conrad's list, most notably the one Damnation for Game 1.

"If I asked you for my 75 could you give them back to me?" grinned Conrad.

"Nah," shrugged Michael, "I don't really care about a lot of them." But you could tell that one Damnation was troubling him.

Conrad won the die roll and neither player felt compelled to go back to the well on their opening hands. Boreal Druid came down for Jacob on turn one off of a Pendelhaven and snuck in for two damage on the second turn. Jacob offered up Giant Solifuges on the next two turns only to have them get Rune Snagged and then have his Troll Ascetic's soul removed.

A third Solifuge stuck a couple of turns later and Conrad-after assessing that Jacob was down to two cards-traded a Teferi for it. Jacob followed up post attack with Troll Ascetic and Conrad went into the tank, "I need one second to think."

Jacob looked over at his mass graveyard of Giant Solifuges and could only fantasize how the hand would have played out against his best matchup. "Just imagine how bad this would have been for you if you were playing a Blink deck." 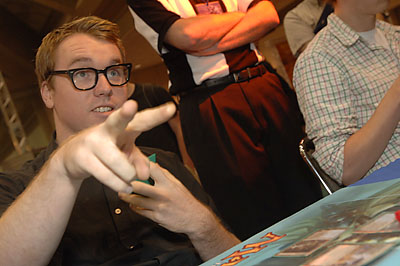 I'm coming for you, Michael Jacob!

"I guess I am glad I am not playing a Blink deck," said Conrad as he let the Troll hit and untapped to Damnation away Jacob's board. He prompted Jacob for the mandatory response for someone drawing their one mass removal spell, "How lucky?"

"How lucky," agreed Jacob who was shaking his head. "So you kept the hand because you had your one Damnation?"

"To be honest it wasn't there when it started," laughed Conrad in an attempt to tilt Jacob-the Damnation has been there all along. The game ended a few turns later as Jacob was out of gas and Conrad deployed Teferi and Skeletal Vampire on consecutive turns.

"I can see now why you ran the one Damnation," sighed Jacob.

After a first-turn Llanowar Elves, Conrad wanted to gripe about Michael's draw but caught himself. "I want to say something but I remember playing Fires with eight elves and you always draw one."

"Eight is certainly more than one," agreed Jacob who powered out a turn-two Troll Ascetic and offered up a Loxodon Warhammer on turn three. Conrad picked the card up and gave it the once-over before sending it back to hand with Remand. He played a Signet and passed the turn back only to repeat the procedure.

"Sorry to keep reading it," said Conrad sheepishly before his second Remand. Damnation cleared the board but Jacob was able to find a fourth land and slammed a Solifuge down with Conrad tapped out and took him to nine. Things started to get a little heated at this point when Conrad wanted to check with a judge about whether or not he could use Desert on a Solifuge. His Desert was printed in Russian and he was unsure of the actual wording. 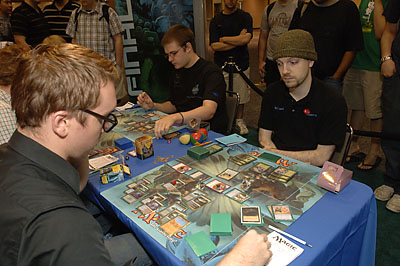 A win meant a spot on the U.S. National Team.

"Whatever," said Jacob, who was clearly irritated.

"If I am playing too slow--" offered Conrad but Jacob bit his head off.

"Whatever. If you are going to play with foreign cards you should make sure you know what they do."

The judge confirmed that the card targeted and could not deal with the Solifuge. Jacob finally got his Warhammer to stick and also resolved Boreal Druid, only to have Conrad Seize the Soul of the 1/1 and traded the token creature with the Solifuge a turn later, although he did fall to two life to do it. Michael attempted to replenish his board with a Druid and Troll Ascetic but Conrad used Mystical Teachings to get a Rune Snag for the Troll. When Michael attempted to equip the Druid, it was killed with Terror.

Michael was getting frustrated, and when he played Timbermare Conrad picked up the card gingerly, "I am going to read this card…okay?" He must not have liked what he saw because he countered the spell with Flashfreeze, which further tweaked Jacob.

"The one Flashfreeze too? You are a master." Jacob played a Treetop Village which could potentially close the game with Conrad at a precarious two life, but Conrad kept it at bay by Teachings for Slaughter Pact. Jacob tried to bait the Pact with Groundbreaker but it was met with Remove Soul. By now Conrad had the Teachings engine going and he tapped out to flashback Teachings for Teachings and Teachings for Draining Whelk.

Jacob took advantage of that opportunity to sneak out Scryb Ranger and Jacob was happy to Damnation the troubling flier away. He added Ghost Quarter to his board giving him a back up plan against Treetops and flashed out Teferi off of a Teachings. The game was very complicated and Conrad was agonizing over every decision. The judge told him that he was going to have to play faster, which seemed to puzzle the Philadelphia player.

"I have so many decisions to make each turn," protested Conrad but the judge was unmoved by his plight. It didn't really matter as Conrad was able to flash out Skeletal Vampire and Tombstalker over the next few turns with a little help from Teferi and Mystical Teachings.

Jacob had the turn-one Elf into Troll Ascetic again. This game he made it a 5/4 with Moldervine Cloak on turn three and never looked back as Conrad did not have a Damnation to help him this game, despite siding into a full set of four.

It was Conrad's turn to play first and he closed out the possibility of a turn-two Troll this game by using Last Gasp on a Boreal Druid. Both players missed a land drop and when Jacob recovered, Conrad was ready with Rune Snag for the Troll. Conrad steadied at four lands and was able to Terror an upkeep-cast Scryb Ranger and RemandTroll Ascetic, then Remove Soul it the following turn.

Jacob slammed a Solifuge onto the table and got a fist pump from Pat Chapin, who was standing along the rail with a glum Michael Flores. Pat and Mike had made a friendly wager after Pat claimed that Jacob would be the National Champion back when Jacob was 7-0. Conrad had Faerie Conclave but chose not to block the Solifuge on the next turn. He was stalled on five lands and was not prepared to throw one away just yet, and fell to eight in order to Mystical Teachings for Careful Consideration.

He untapped and dug for four cards on his turn but did not find another land and passed the turn, only to find himself staring down the barrel of a rather preposterous gun when Jacob cast Groundbreaker and put a Moldervine Cloak on it.

Conrad packed up his cards and looked up at the table judge, "These games go a lot faster when I am not winning."

"Let me see if I can hold serve here," Conrad was pretty relaxed despite dropping two games, and seemed confused by the intensity of Jacob. "Are you mad at me for some reason?"

"No," glared Jacob. "Although that Game 1 Damnation…"

While the two players shuffled for the rubber game of the match, Chapin and Flores were laughing at the fourth game's closing play. "That is something you just don't see every day…Ball Lightning with a Cloak on it." 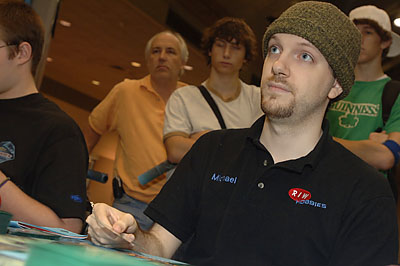 The comeback came slowly but surely for Jacob.

"I wait all year for Magic Weekend to see something like that."

Conrad kept his opening hand but Jacob mulled a lousy opener and stayed with a hand that had a Solifuge, an assortment of pump spells, and some lands. He pulled out of the draw to make a turn-three Troll, which was promptly met with Damnation.

"Yeah!" clapped Chapin as Jacob snapped a Giant Solifuge right into the red zone. Conrad shook his head and took that one down with his second board spot removal Wrath effect. The top of Jacob's deck had been very kind to him and another sideways Solifuge hit the board, prompting more applause from Chapin.

Conrad grinned ruefully and sighed at the judge: "Can you ask the spectators not to run it in." He may have been trying to disguise the fact that he was about to flash out Draining Whelk without any spells on the stack to block the insect.

Jacob took that opportunity to flash out his Scryb Ranger and the two players tussled over the pro-blue faerie a turn later when Jacob cast main-phase Might of Old Krosa. Conrad attempted to Tendrils for two but Jacob had another which would make the flier a game-ending 9/9 if Conrad had no answer. He used Last Gasp in response and fell to two from the Solifuge's last attack.

All Jacob had left were two Treetop Villages and he sent them both in. Conrad looked at his hand and wondered where the match had gone wrong, "Am I short one life here? Can I really be losing this match by one point?"

He was holding Seize the Soul which would let him kill one Treetop and block the other, which would die after combat from the haunt ability of Seize the Soul-but he could not do anything about the trample for two that was going to get in there first.

Michael Jacob defeats Conrad Kolos 3-2 and advances to the semifinals, and a spot on the U.S. National Team.